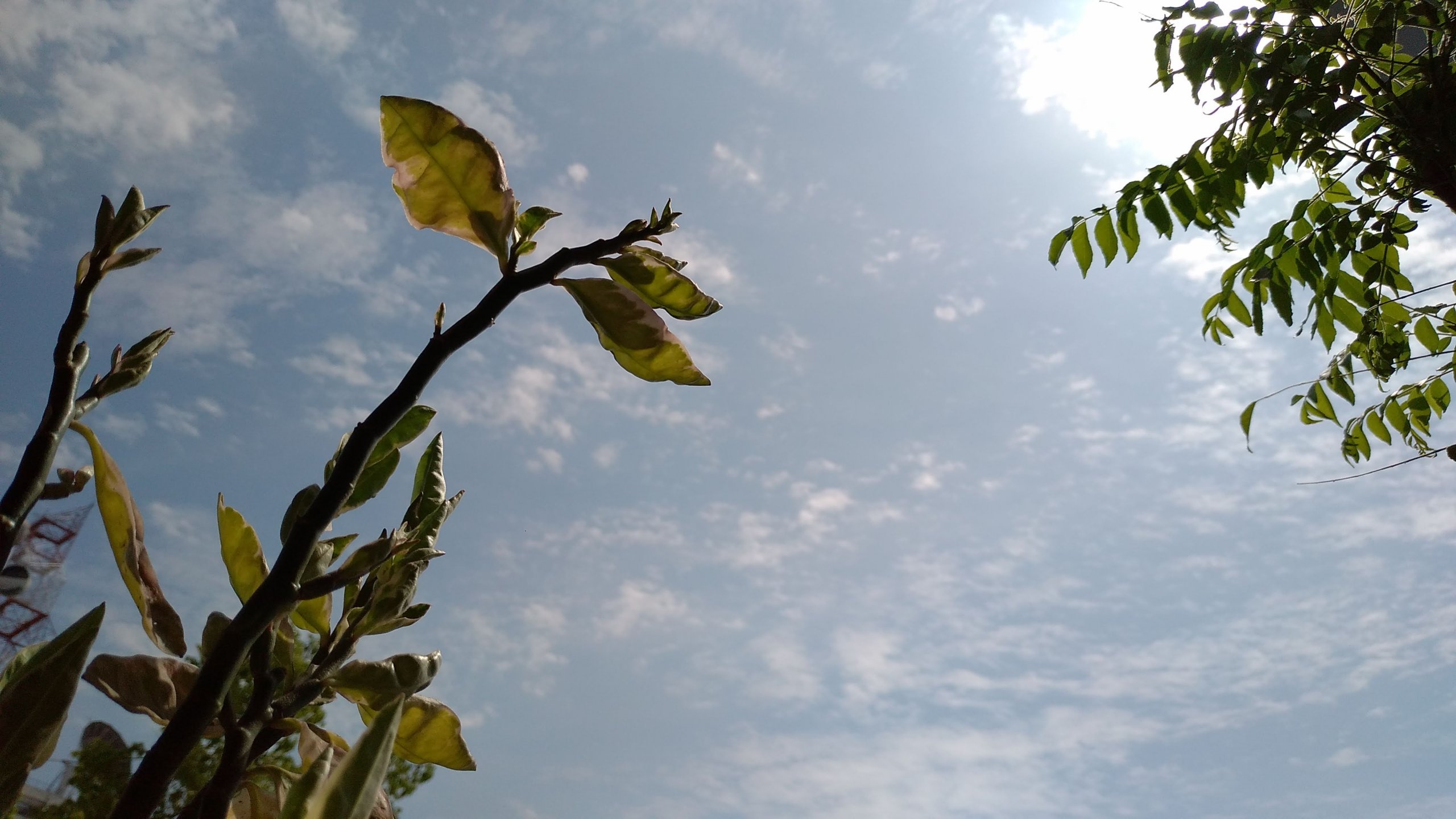 Taking Automobiles Off the Road — How COVID-19 Healed Us

As COVID-19 drove vehicles off the road, the air became cleaner and the sky bluer. Yet, do we realise why or how we must sustain the change?

Basking in the shade of an ever-accommodating, ever-comforting tree that stands forever by the roadside, traveling far in imagination, watching piles of cottony clouds perform their act against the azure backdrop.

A warm evening when, after a slight drizzle, the slanted, golden rays of the setting sun present you with a rainbow, and make the tall buildings at the distance look like mountain peaks. Later, when the evening’s darkness has completed its descent, you take a break from work and sit under the open sky, counting stars and playing games with constellations. 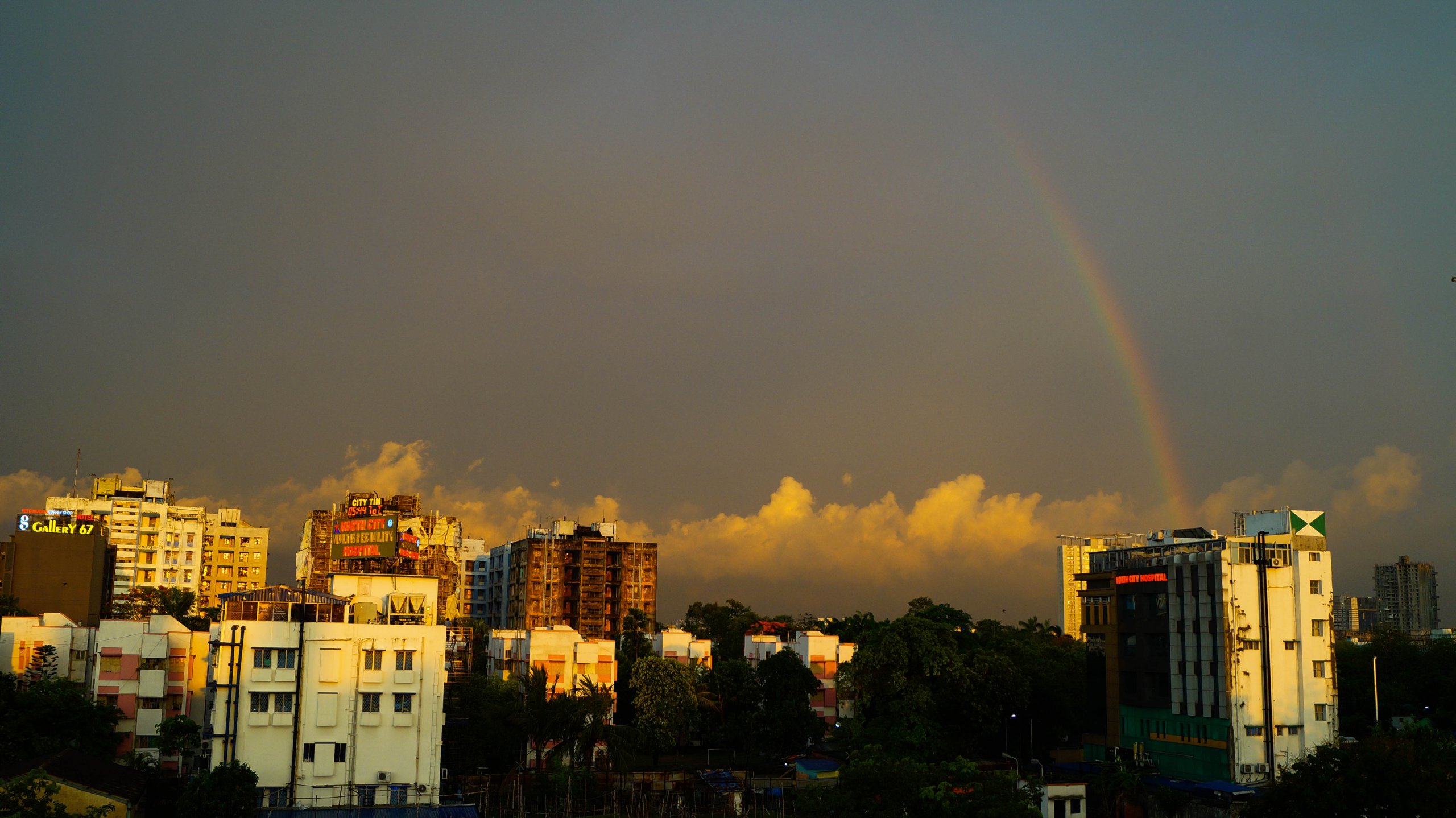 An evening when we saw the rainbow (Image by Shiladitya)

Living a city life, these appear to be images from a faraway land, a distant memory, or scenes from a fictitious world. As we grow up, the sounds of rumbling engines, shrieking horns, crackling silencers, and screeching brakes—accompanied by the yells and curses of drivers and conductors—become the background score to our lives. To spice up their music—literally so, giving us itchy eyes—the musicians of this city-score fill up the air with smoke and we, the devoted listeners, breathe it in until our lungs burst.

Aspiring for speed, we bring out more and more vehicles on the roads, even as they spew black soot, intoxicating the air, choking us slowly, and rapidly veiling the sky in a haze. Hallucinating on the excessive carbon in our bloodstreams, we accept poisonous air as being inseparable from our day-to-day existence—the collateral damage for development. At times, when the days become too unbearable, those of us who can travel, seek solace in the laps of nature, as if nature is something that inherently exists outside the periphery of urban living. At least, so we thought until a few months back, before the pandemic came along and turned our lives upside down.

At the end of March when the lockdowns began in Kolkata—as they did elsewhere—automobiles went off the road almost all of a sudden. At first, the silence was uncanny and the summer became cooler, more bearable. As it went on, the air became visibly cleaner—AQI markers dropped from above 400 to below 20—and we began breathing fresher. 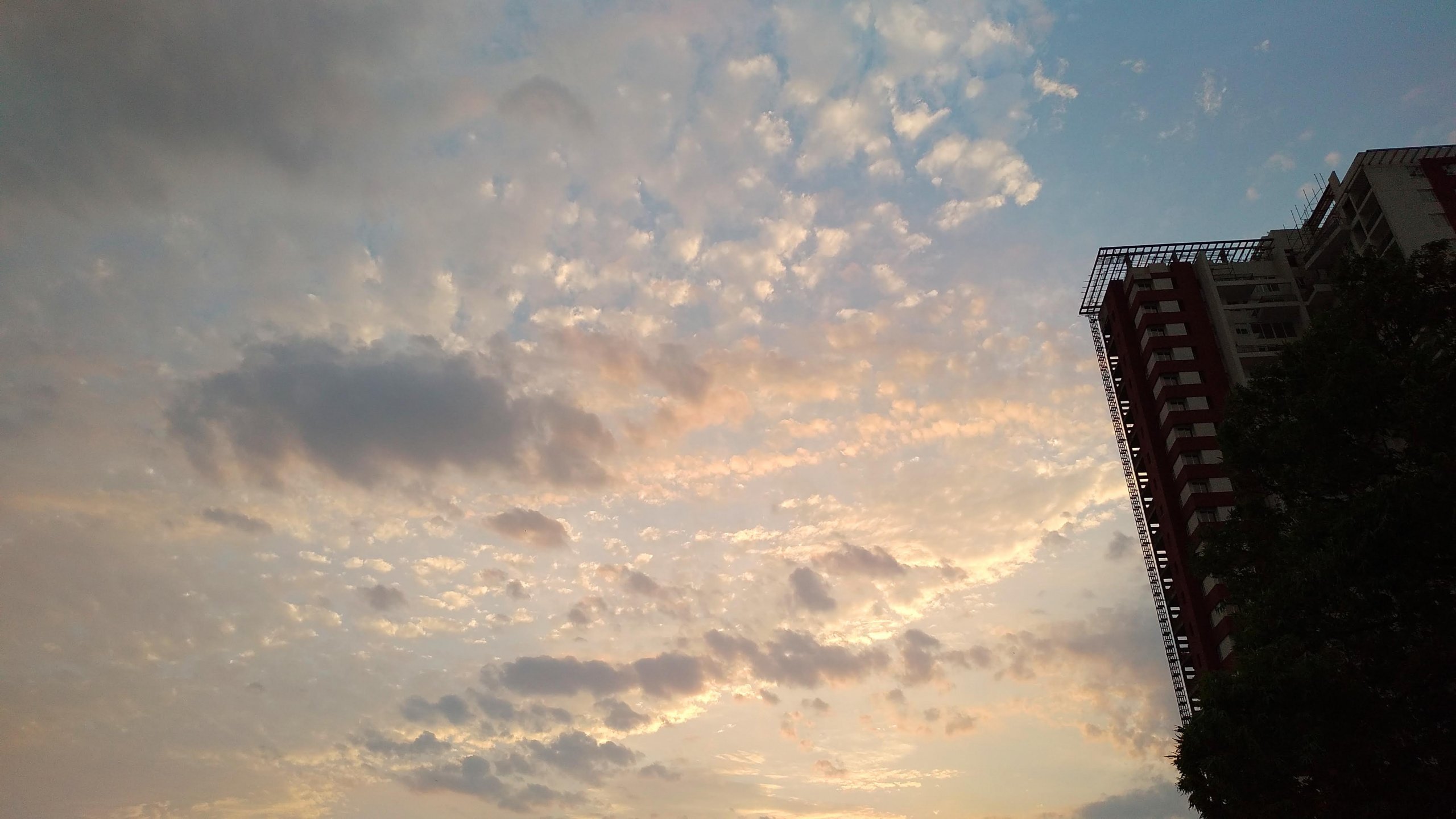 When a golden light filled the blue sky (Image by Shiladitya)

“The earth is healing itself”, the wise agreed with the foolish, as dolphins and deers returned to places that they had fled a long time ago. We awoke to the song of birds, a new experience for many who lived their lives subsumed by the city-score. Although locked in our homes, we could count stars and watch rainbows—real ones, not in photographs. Some of us must have also felt healthier, relieved of a persistent and year-round coughing sensation.

Notwithstanding the havoc that it is wreaking on lives and livelihood, COVID-19 has shown a way of healing ourselves and our world. Of course, it is upon us to see, and more importantly, to act.

After over half-a-year since the outbreak, we are now staggering back, out of our homes, and into a “new normal”. Lesser vehicles are jostling on the road, but their numbers are again rising steadily—the return of a Problem. However, these days, significantly more bicycles on are plying on Kolkata’s roads and there have been certain unprecedented initiatives at the governmental level—the beginning of a Solution.

In the past, I have written about the situation around cycling in Kolkata, and recently, a lot is already being said about how cycling can help in building COVID-aware cities. Incompetent as I am in adding much value to the ongoing, formal discourse on bicycles and cycling—at social, economic, and also political levels—I would abstain from making an attempt on that front.

Instead, I urge an honest re-evaluation of the sense of need that we associate with cars, especially in relation to the daily commute. Is it truly a matter of need or are we being fed a dream that we cannot digest? From art films to billboards, including every communication channel in between, owning an automobile is represented as a matter of pride and social status—a sign of progress. Yet, in these times of climate change, rampant resource depletion, and above all, degrading air quality, is our collective aspiration for smoke-spewing automobiles really a progressive outlook? 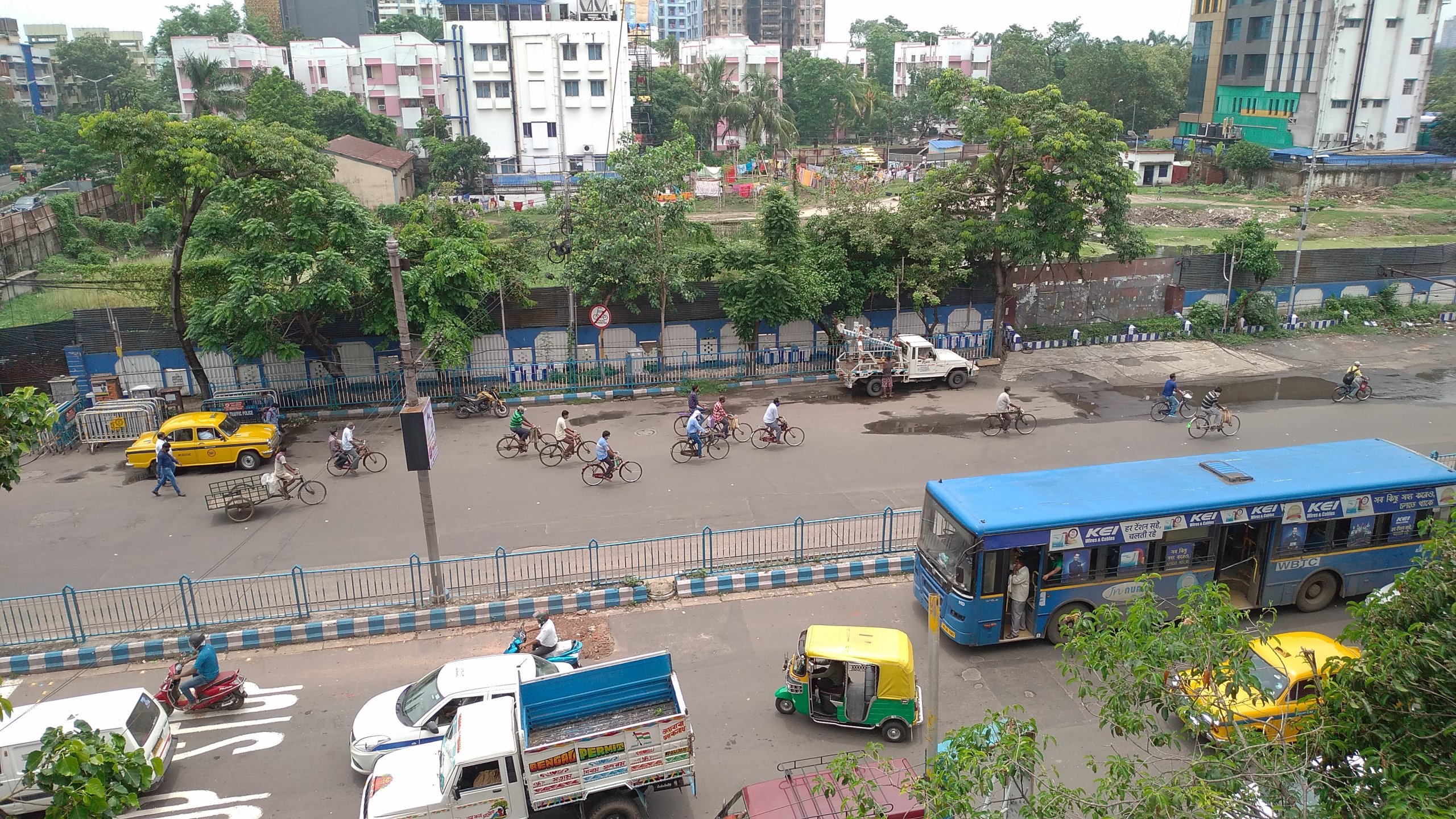 The return of bicycles (Image by Shiladitya)

Of course, the situation is slowly changing for the better, and sales figures for bicycle manufacturers have been at all-time highs, but the dominant perception of bicycles as baggage from the past still remains. Consciously or unconsciously, we associate cycling with those who lag behind on the developmental, economical, and intellectual forward march. While some of us are blatant in this regard, others find it “too difficult” to use bicycles for their day-to-day travels. We justify our claims by pointing at the heat and the sweat—realities which progress must enable us to overcome. As someone who has traveled over 6 km every day on a regular bicycle and has come across many others who travel even farther on bicycles in far-worse conditions than mine, I sometimes find these claims nothing but hilarious and ill-informed, although, at other times, I try to make better sense.

Globally, several initiatives are being taken to make us more aware of the need and ways of environmental preservation and sustainable living. Assigning particular days of the year for commemoration or collective action regarding a certain aspect is a prominent part of these drives.

For instance, the UN-declared World Bicycle Day (3rd June) is meant to directly stress the role of cycling in achieving sustainability goals. Others, such as International Day of Clean Air for blue skies (7th September) and World Car Free Day (22nd September), emphasize the fact—indirectly or directly—that reducing the number of motorized vehicles is a major step towards mitigating climate change.

Earlier, the association between lesser vehicles and cleaner air seemed far-fetched or even absurd. Now, we have first-hand experience (evidence, if you will).

Introspecting our inflated sense of need in comparison to how little we actually need for sustenance, it shouldn’t be very hard for us to make better sense of our automobile dependence. That apart, if not anything else, cycling or even walking is much less difficult than living with the stress of never-ending EMIs and loan repayments.

Written by
Shiladitya Sinha
Alongside writing, both professionally and for leisure, I cherish the experiences of music, reading, and cinema, while also being perpetually eager to interact with people’s lives and cultures.
Recommended Articles