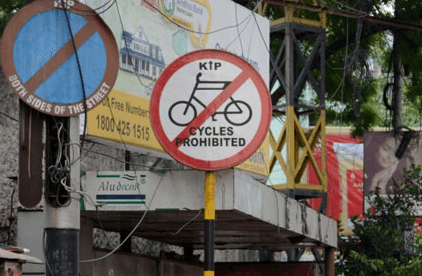 The Absurd Cycling Ban of Kolkata
When it comes to dealing with air pollution, Kolkata is peculiar. Despite the impending crisis, there is an absurd ban on cycling along 64 of its arterial roads.

Bodies like the United Nations (UN), the World Health Organization (WHO), and the World Economic Forum (WEF), among others, are making formidable efforts to address the crisis.

In short, climate change is quickly turning into an “emergency” and our “time is running out”. And, among its many causes, air pollution is the most potent and harmful.

So much so, that the United Nations Environment Program (UNEP) regards climate change and air pollution as the ‘two sides of the same coin’. The World Environment Day 2019 was themed on air pollution, with a trending hashtag of #BeatAirPollution.

Now, if you still consider all of this hue and cry hype or overthinking or pessimism—which many unfortunately do—think again. Every year, we lose 7 million lives to air pollution worldwide, the WHO found, in a study.

That was more than a year back—in October 2018. A lot has changed since then, especially in the Indian context.

The air quality index of Delhi and Kolkata—two of the major Indian metropoles—oscillates between ‘poor’, ‘very poor’, and ‘severe’ during the yearly smog episode (presently a winter ritual). On some days, Delhi is the most polluted, while on others, it’s Kolkata—as if participants in a race.

Having said that, it’s not enough to merely understand the problem. We need action. While governments need to formulate policies to curb air pollution we, as individual citizens, must adopt small but effective changes in our daily lives.

For that, using bicycles instead of cars for daily commuting is one way to go. And, the best part? It’s much more than just eco-friendly.

Cycling is one of the ways to achieve the UN’s Sustainable Development Goals. In 2018, they even announced 3rd June as the World Bicycle Day. Furthermore, researchers have repeatedly noted that cycling promotes emotional and physical wellbeing. It’s also being seen as a way of enhancing social inclusivity which, given the fabric of our times, is becoming increasingly imperative.

However, a majority of the research on cycling—especially with regard to the environment and air pollution—is focused on specific European situations. Their findings do not adequately apply to the third world context, especially Kolkata.

In fact, when it comes to dealing with air pollution, Kolkata is peculiar. Despite the impending crisis, there is an absurd ban on cycling along 64 of its arterial roads.

That being said, let’s take a look at some of the specific aspects of the air pollution in Kolkata, and the subsequent significance of cycling. Also, this is a good place to introduce the Kolkata Cycle Samaj—a community of bicycle lovers acting as a pressure group, trying to bring about a positive impact on the city environment, by repealing the ban, stopping the fines, promoting cycling and developing a bicycle-friendly culture in the city.

Unlike Delhi, Kolkata doesn't have ‘open agricultural burning’ to blame for smog episodes. In fact, here it’s more permanent than an ‘episode’ per se. And, the causes of degrading air quality are also more persistent.

In 2017, Md. Senaul Haque and R.B. Singh of the Department of Geography, Delhi School of Economics, conducted comprehensive research titled Air Pollution and Human Health in Kolkata, India: A Case Study. They write, —

“An analysis of different sources of air pollution in Kolkata has revealed that motor vehicles are the leading contributor to air pollution (51.4%) which is followed by industry (24.5%) and dust particles (21.1%), respectively.”

The rampant growth in motorized vehicles’ population on the “6% of the available road space”, results in greater congestion, increased emissions, and ultimately more air and noise pollution.

Anyone who lives here knows fully well that the number of vehicles has only increased since 2011—especially with the boom in app-cab services, among other factors. Yet the authorities have, time and again, used the ‘6% road space’ argument to enforce and justify the ban on cycling.

Now, isn't this absurd even at the very surface? Who doesn't know that the most important step to tackle this crisis is to check the number of smoke-emitting vehicles? Who isn't aware that the bicycle—a zero-emission mode of transport—is the best available alternative? Also, can we call bicycles “slow-moving” when the average speed on some of Kolkata’s roads is only 7.7 kmph.

To add, reports suggest that cyclists are less exposed to air pollution than those in cars. And, while it takes me over an hour to reach college by bus, I reach there in half the time on my bicycle, any day.

Yet, instead of being hailed as the saviour, the bicycle is pushed off Kolkata’s roads, apparently to ensure ‘smooth movement of traffic’ and ‘No Cycling’ boards shamelessly adorn the sidewalks. That is the irony of Kolkata’s air pollution crisis—a perfect example of why Inger Andersen, the Executive Director of UNEP, regards air pollution in cities as “self-inflicted”.

Cycling Against All Odds — The Journey of Kolkata Cycle Samaj (KCS)

The ban is utterly insensitive. No doubt. But, it’s not the only demon chasing Kolkata’s cyclists. At least, it doesn't stop thousands of people from traversing the city on their bicycles—for several reasons including financial viability, livelihood, health, or the environment.

The most direct and practical issues we face relate to the absence of infrastructure, as well as, the erratic and unofficial fines imposed upon cyclists. I say ‘unofficial’ because the West Bengal Motor Vehicles Rules, 1989—the basis of the ban—doesn’t have any provisions for a fine.

Although KCS has grown manifold since then, it was one such fine that sparked its formation.

“In 2009, I was going from my student’s home in Posta to the little magazine fair at Presidency College when I was stopped and fined near the Mahajati Sadan. I couldn't believe that this could happen to me, in my own city, where I’ve spent my entire childhood riding around on my bicycle,” recalls Raghu Jana, one of the initiators of the samaj.

Imagine being in a space where you are not welcome, considered inferior, and looked down upon. That’s the unfortunate truth of being a cyclist in the city of joy. Especially, if you happen to go around on an ‘ordinary’, bangla cycle.

Indeed, most of Kolkata’s cyclists are economically weak and this apathy is inherently classist. Anyhow, I won’t delve into all that as the subject deserves individual attention.

The point is, there’s a cultural disregard for the bicycle and cyclists—that which enables the ban. It’s this apathetic culture that the KCS strives to change. And, realizing the need for a holistic cultural change, KCS works at multiple levels—from signature campaigns to legal action to diplomatic negotiations with state authorities to bicycle rallies and demonstrations.

I’d rather highlight a crucial aspect of its politics, its approach towards change.

I reiterate it isn't enough to simply understand the situation’s gravity. If we aspire to change, we must act positively.

“If you use your bicycle and not a car for commuting, you’re already contributing to the bicycle movement. You don't even have to consciously think about the environment or pollution. Do it for your own health or to save money. You’ll automatically save the environment,” he added.

Despite all, however, in a situation where greater automobility is the dominant aspiration, where owning a car is a “dream” for many—which the popular culture constantly validates—you can’t blame cyclists for feeling low about themselves.

“KCS is a space where fellow cyclists and bicycle lovers interact. If you’re a regular cyclist in Kolkata, it’s quite easy for you to feel left out. The attitude of co-drivers and onlookers, people with whom we share the road, is mostly very negative." says Jana.

"Because of this shared experience, we usually get a very spontaneous response for our initiatives. While many feel empowered with a sense of ‘not being alone’, others gain the belief that they can ride some 40 km around the city, without any pain. This, I feel, is our biggest achievement,” he added.

With that, it’s quite safe to assume that I’ve made the point. Kolkata is choking, while the bicycle—it’s saviour—is ‘prohibited’ on its streets. Also, a majority of its people and the authorities aren’t very fond of cyclists. Still, it’s better to end with a ray of hope. Isn't it?

Recently, the KMDA and the state government has announced plans to set up ‘dedicated cycling zones and cycling tracks’ around the city. Obviously, that’s great news.

Yet, can we truly rejoice as long as there are NO CYCLING boards? Can we now hope that the proposed bicycle lanes along the EM bypass—lying unfinished for years and slowly turning into gardens or foundations for shops—will be completed soon?

Are times, then, changing? Will the cyclist now be given the respect and empathy that’s been long overdue? Will our contributions towards a clean, green, and healthy Kolkata be recognized? Maybe, if we try, it will.

(A writer by profession, Shiladitya is a member of the Kolkata Cycle Samaj, a regular city-cyclist, and an active contributor to the bicycle movement in Kolkata. Alongside this, he's a student of Philosophy and a lover of the arts, cultures, and cinema. He can be contacted on Instagram, facebook and twitter.)