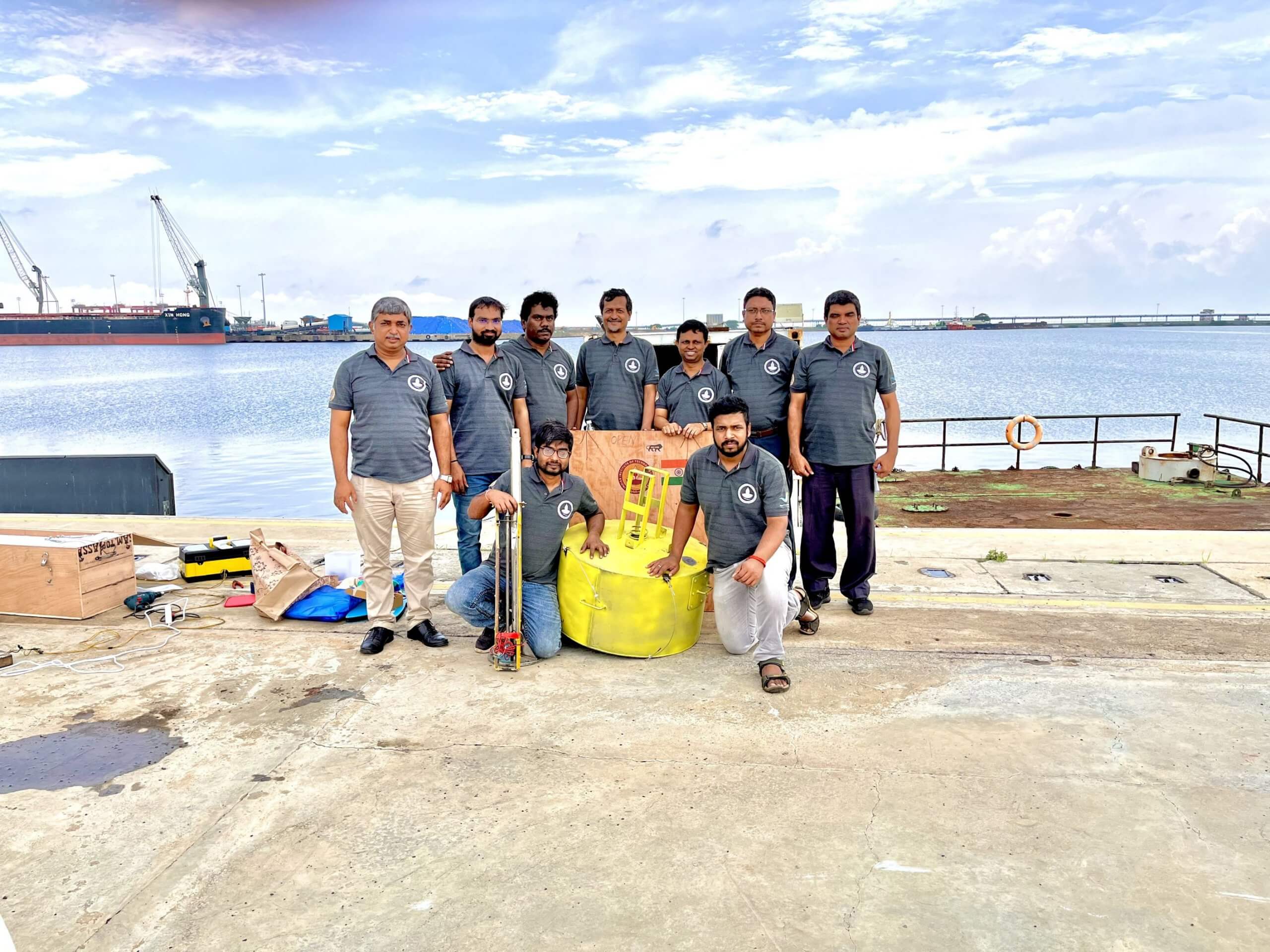 Breakthrough in energy optimisation using ocean waves at IIT Madras
In 2020, Sai Karthik Sunkara, a student of NIT- Srinagar, started working with the Ocean Engineering Department of IIT-Madras, as the institution was researching the same idea of generating electricity from sea waves. Together they developed a device called, ‘Ocean Wave Energy Converter’, or Sindhuja-1, to generate power from the waves. In November 2022, they […]

In 2020, Sai Karthik Sunkara, a student of NIT- Srinagar, started working with the Ocean Engineering Department of IIT-Madras, as the institution was researching the same idea of generating electricity from sea waves. Together they developed a device called, ‘Ocean Wave Energy Converter’, or Sindhuja-1, to generate power from the waves. In November 2022, they deployed the device 6 km off the coast of Tuticorin in Tamil Nadu and placed it at a depth of 20 metres.

The researchers at IIT Madras worked under the guidance of Prof Abdus Samad, who has been working on this project for years in the 'wave energy and fluids engineering laboratory' or WEFEL he established. In an exclusive interview with Let Me Breathe, Prof Samad shares the mechanics of this device and how it will change the course of renewable energy in India.

Edited excerpts from the interview

Tell us about the ocean wave energy converter and how does the device function?

Waves you see near the seashore are created by wind. The wind blows as sun rays fall on the sea surface differently at different locations. When the wind blows long distances over the sea surface, it creates ripples, which grow and become waves. Every few seconds, one wave crest appears. This is not the “tide" created by the solar and lunar effects on the earth.

Now the question comes to how to harness the energy. Any balloon kept over the sea surface will move up and down with the waves. If we tie the balloon with a rope and the other end of the rope is tied to the sea floor with an anchor block, the rope will face alternating force because of wave action. Now, I can put a mechanism to convert the force into electricity. There are more than 1000 concepts to harness ocean wave energy; a few were tried in the sea.

Our system has a doughnut-shaped buoy and a long rod passing through the buoy hole. If the rod is fixed on the seabed, the buoy floats, relative motions are created between the rod, and the buoy moves up and down with the waves. A rack and pinion-based energy harvester convert mechanical energy into electrical energy.

Why was the device named 'Sindhuja 1' and what was the inspiration behind it?

We wanted Indian-ness. Sai Karthik registered his company as Virya Paramita Energy Pvt Ltd. Virya Paramita means perfection of zeal, sincere effort, and energy. Regarding Sindhuja, we had lots of discussions about the proper name of our product. Even we consulted a Bengali poet. Finally, we made Sindhuja (born of the ocean).

Why the Indian-ness? In 2019, when Sai started speaking to me to collaborate with some western company and develop a wave energy system, I said, Let's try India. He agreed instantly. We did not want to be the supplier or vendor of the western companies. We have talent and excellent institutes, and we can do it. We will go international with market exploration to create opportunities.

How will the device help India achieve the target of generating 500 GW of electricity through renewable energy by 2030?

Presently, the Ministry of Renewable Energy (MNRE) does not consider wave energy in its energy basket as there is not much work in India to harness wave energy. The National Institute of Ocean Technology (NIOT) later installed a wave energy system in the Vizhinjam port area that got decommissioned. Later, they developed a navigational buoy and handed it over to a company for commercialisation. And regarding my work, I use a different technology than the NIOT.

Tell us more about the 'wave energy and fluids engineering laboratory' (WEFEL) you have established and its role in developing this device?

To know WEFEL, you need to move to 2012, when a Ministry of Earth Sciences (MoES) project was approved, and I got machines for wave energy system testing. But there was no place to keep them. Finally, I got a junkyard to make a lab. It was a big challenge; I had to make a junkyard for the lab and deliver the project on time! I cleaned the space and completed flooring, electrification, road construction, drainage system, etc. Then it became a beautiful lab, and machines were installed. I put the name WEFEL. So, it can intensify research on wave energy.

The lab is the key to wave energy research at IIT Madras.The works are numerical simulations, design, optimization, lab testing and field trial. We can say, Virya Paramita Energy is the spinoff company from this lab.

What is the future of 'Made in India' renewable energy?

Ocean is vast, and already the European Union (EU) has moved towards the ocean. We need to move towards the ocean; it is both renewable and non-renewable. If we consider the blue economy concept or UN's sustainable development goals, the ocean is a viable field. Offshore and onshore have ample opportunities for solar power, wind power, tidal power, and wave power.

The Indian government is pushing innovations through different schemes and start-ups. It is highly required to look blue economy so that a portion of the energy can come from the ocean. The EU has already targeted 10% of their energy to come from the Ocean. We have a 7500 km long coast; we need to set a target.

How cost-effective will this device be, and when can we expect it to be available for general use?

We are in the R&D stage, so for the most part it can be difficult at this moment. But, as per our preliminary calculations, we can say the navigational surveillance systems will be cheaper than the existing ones. We expect small systems such as wave powered surveillance systems to be brought to the market by 2024. Defence, port, resort and local community can use it.

Regarding desalination for islands, the Levelized Cost of Water can be cheaper. Sea water is not drinkable, so giving free water to islander, it can be one of the best solutions.