We are messing up space!

In October 1957, the USSR created a new history in humankind by launching first-ever artificial satellite- Sputnik 1 into space. It not only marked the beginning of new explorations and the Space Age but also befouling of space in the coming decades. Space Junk Is Real Space junk or space debris is any kind of […]

In October 1957, the USSR created a new history in humankind by launching first-ever artificial satellite- Sputnik 1 into space. It not only marked the beginning of new explorations and the Space Age but also befouling of space in the coming decades.

Space junk or space debris is any kind of machinery left in space by humans. More precisely, they are non-functioning satellites or those which are left after completing their mission. It can also be tiny parts fallen off from rockets while launched to space, even the thousands of pieces of satellites as a result of mutual collusion.

Some countries, including India, have conducted missile practices to blow up satellites.  According to NASA, there are more than 27,000 pieces of orbital debris– both active and inactive, in large and small sizes. Most of them are threats to the space environment and human space missions. It was also found that, due to the extreme speed of debris, even a tiny piece of junk can create huge destruction to spacecraft which could cost human lives.

The International Space Station (ISS)- a collaborative project by the USA, Canada, Japan, Russia and the EU, has been hit by these debris many times and has caused damages. It is said that there is a possibility in future to get more damages due to increasing space debris.

To understand such future possibilities, the Defense Department of the United States uses Space Surveillance Network to closely monitor space debris. This helps to know the speed, direction and size of the debris. The space debris are found in low earth orbit and some of them in geostationary orbit too. There are chances for this debris to re-enter Earth’s atmosphere. But it will take years or centuries.

Cleaning Up the “Junk Yard”

The amount of junk found in space is surprising. Cleaning up these junks is a mammoth task. In 1978 Donald Kessler, a NASA scientist proposed an idea to clean the space. His idea, known as Kessler Syndrome, was that the space junks can create a chain reaction by the collusion of more and more space debris. As a result, new space junk is formed in the process and the Earth’s orbit becomes unstable at a point.

According to European Space Agency-ESA, the debris level has increased to 50% compared to previous decades. The United Nations urged all companies to remove space junks twenty-five years after their mission. In recent years, experts are developing new technologies to solve this modern-day menace.

The ESA, in 2019 became the first to launch a space mission to remove the space debris. The mission, ClearSpace-1 is planned to be launched in 2025. The RemoveDebris satellite, launched by the British in 2018, uses a net to remove debris from space. This successful project hopes to remove large junks in the future. But, the issue with these projects is that they only remove large junks. The small pieces of junk are difficult to collect with these techniques.

The Future of the Space

The amount of space junk is expected to increase in the coming years. Private companies like Amazon and SpaceX are planning to launch satellites as part of space tourism and space explorations. There is a high risk for satellite collisions too. 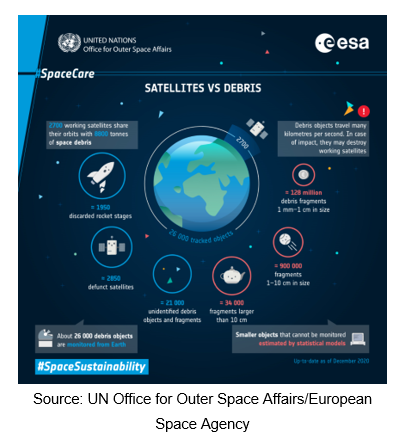 The methods developed by various space agencies and companies are often criticised for being science fiction. The Japan Aerospace Exploration Agency-JAXA is testing an electrodynamic tether, an electronic space whip, to remove debris out of space and burn it in the Earth’s atmosphere. ALE, a Japanese start-up company developed another solution to capture the debris by making the satellites inactive with the atmospheric force while it is dragged out of orbit.

The timely removal of inactive satellites and reducing the total mass of space debris can help in reducing debris in the coming decades. Space holds an endless scope to learn and discover more. While developing new space technologies, there are new techniques for cleaning the debris that are also necessary.

Written by
Nadashree M.K
Nadashree M.K. completed her Masters from Pondicherry University and is currently associated with the Svadhyaya Youth Organization based in New Delhi. Follow her on her journey as she attempts to learn more about the environment and human rights.
Recommended Articles