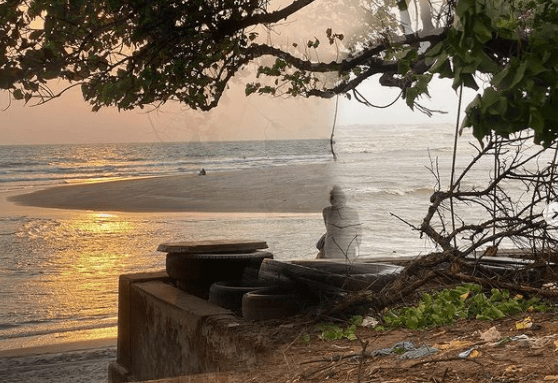 Glimpses of a climate changed world – cyclone Tauktae, 100 meters from a Goan coast
(A photo series) Photo 1:  The chapel staircase separated the land from the beach by about 1.5 meters. Just the other day, I was sitting there photographing the distant glimpses of the cyclone. So, when I saw the ocean water rise over the same staircase, I gasped. It was very humbling to witness a current […]

The chapel staircase separated the land from the beach by about 1.5 meters. Just the other day, I was sitting there photographing the distant glimpses of the cyclone. So, when I saw the ocean water rise over the same staircase, I gasped. It was very humbling to witness a current of water that could envelop me had I been sitting at the same staircase.

The interesting thing about cyclones is that they can only form when the ocean is warm enough. A warm ocean heats the surrounding air. Like hot smoke, hot air rises, creating space for the colder air to rush in from nearby regions.

Instead of filling the space, sometimes colder air from different regions starts cycling around the space similar to how water drains in a sink 🌀 Except that for the cyclone there is no sinkhole here. Some of the incoming cold air takes the heat from the ocean and rises again to be replaced by newer colder air. When this repeats above a certain wind speed, you get cyclones.

I was away from home, living at an Airbnb flat only 100 meters from that chapel. After the cyclone cut off the power and network, it wasn’t possible to know how it was progressing. I was sure that if the cyclone arrived nearer to the coast, water would flood the land and the roads. So, I rushed back to prepare a survival bag and to convince the host families of my flat to join me in search of higher ground.

They were surprisingly calm. All the houses in my neighborhood centered on a cross where everyone would gather every day to pray. Benny, the landlord was firm that the water would not come to the cross. “No chance! You will see, the water will go behind our houses and not come here”, he asserted. His confidence about the land where he and his ancestors have been living for 100s of years was comforting. But he hadn’t seen the waves and even if he had, having trained as a scientist, his confidence wasn’t enough for me.

Thanks to global warming, global average temperatures have continuously risen since the 1950s as a result of the world burning fossil fuels to power its societies and to produce the things it needed. The burning of fossil fuels releases a gas called carbon dioxide which traps the heat from the sun, thus warming the planet.

So far, oceans have absorbed 90% of that increased heat but this has resulted in an increase in the frequency, intensity, and unpredictability of extreme weather events including cyclones. In fact, we know that the Indian Ocean has warmed by over 1 degree Celsius since 1950, and we also know that the Arabian Sea surface temperatures were 3 degree Celsius higher than the minimum threshold temperatures needed for a cyclone to form. No wonder cyclone Tauktae turned out to be the 5th strongest pre-monsoon Arabian Sea cyclone.

Many locals including those whose properties had suffered damage told me that they had never seen water rise as much before. However, they kept a present mindset. They thanked their Gods and took this cyclone as a chance event. I could see how their experiences of the past told them that things cannot change.

Most of them did not have the training of even a college graduate that could enable them to understand the mounting scientific evidence of a changing climate. A superimposed satellite image from Scott Bachmeier shows the distinct eye of the cyclone just before hitting landfall in Gujarat. The more distinct the eye the stronger the cyclone. This was possible as the storm continued to draw heat from the ocean in its path.

Over 90 lives were lost and several are still missing. Estimates suggest a total infrastructure damage of Rs 15,000 crores (5000 crores short of India's COVID relief). Meanwhile, a second pre-monsoon climate-aggravated cyclone 'Yaas' had been forming and made landfall on the east coast of India. By 2040, globally, temperatures are expected to rise by 2.7 degrees Celsius on average.

Climate change is our new reality. For people in Goa, this time, the impacts were manageable and short-lived but the uncertainty after the torrent and the ensuing challenges were felt. It helped me understand how divergent worldviews need to converge for us to prepare ourselves for the future. Finally, it made me feel a sense of loss from losing a landscape that was dear to me even though it was momentarily. This is a superimposition of before and after images of the cyclone on the coast next to the chapel. If the cyclone was a day earlier, these people would be under 1.5 meters of water.

I do not intend to cause anxiety or helplessness with these photos but I aim to bring a visual image of what a climate-changed world may look like. The most important part is that we can create a future that isn’t what these pictures depict. There’s a lot of potential in humanity that is waiting to be harnessed. In fact, I saw many glimpses of it during the 3 days of the cyclone’s impacts.

Without power or network, and damaged roadways, the whole coastal town I lived at had to rely on trusting each other. Many of us didn’t have water and enough food because without power, water couldn’t be pumped and food couldn’t be protected from perishing.

‘Digital India’ had come to a halt because without power, digital wallets were useless, nothing could be bought and money machines couldn’t dispense cash. Trash wasn’t collected for several days. In all of this, people relied on people. Shopkeepers recorded dues for those who couldn’t pay, water was shared within the local neighborhoods, and the time off from everyday life was taken to talk about the cyclone, share a laugh and look ahead. Imagine what humanity could do if people were directed in the right direction.

World over, people, governments, and businesses can realize the new climate reality. Many things have begun but it’s too slow to be at pace with the change. World over, people can do great things if they start taking initiatives to learn, develop projects and start changing the course for humanity.

Note: A thank you to Scott Bachmeier for having shared satellite images on his Twitter.