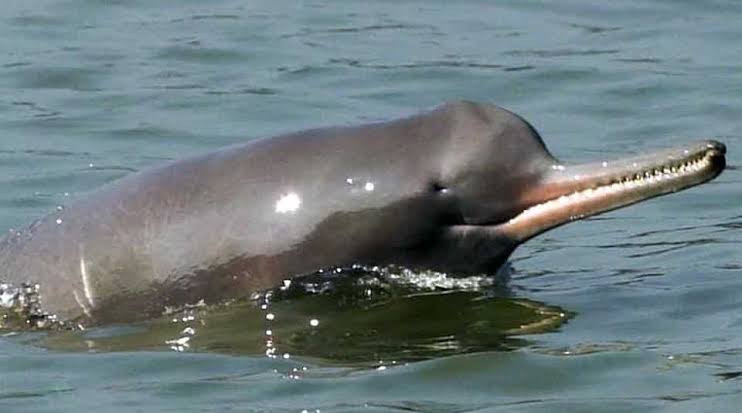 Conserving endangered Gangetic Dolphins for healthy Ganges river
Excerpt: India's national aquatic animal is gangetic dolphin. River Ganga is home to these beautiful 2.5m long brown-grey creatures. Their habitat has been threatened and disturbed causing them to become endangered. Steps should be taken to gauge and tackle the problem of dramatically depleting number of dolphins.

Dolphins are almost blind - although they can differentiate between light and dark and use echolocation to find food along the floor of the river. They hunt by emitting ultrasonic sounds which bounces off of fish and other prey enabling them to see an image in their mind. They are unique among cetaceans in that they swim on their sides. They reach sexual maturity at about 10yrs of age. Dolphin shows sexual dimorphism.

Females are larger than males and give birth once every two to three years to only one calf. They are frequently found alone or in small groups and generally a mother ad calf travel together. They are usually found in turbulent water where there are enough fish for them to feed on.

Incidentally, the Gangetic dolphin is one of only three surviving species of freshwater dolphins on this planet. The fourth one, the Yangtze River Dolphin in China, went extinct as recently as 2006. A lot will need to be done if the Gangetic Dolphin is to escape a similar fate. This mammal figures in the Schedule I list of endangered animals under the Wildlife Protection Act.

The rivers of Assam and Uttar Pradesh respectively had 962 and 1,275 Gangetic dolphins. These numbers were tabled in Parliament by the Minister of State for Environment and Forest Babul Supriyo.

Besides disturbance in their habitat, extensive killing of dolphins for trade in their oil and meat which is used as a liniment, as an aphrodisiac and as bait for catfish (Clupisoma garua), locally known as gherua or ghera fish .The older the oil, the better and costlier it is. Oil that is at least a year old is sold between INR 1200 to 2000 while dolphin meat is sold at around INR 150-200/kg. The dolphin oil is also used as a cure for joint pain and gout. The magnitude of killing is not clear.

This is a large scale wildlife crime involving an endangered ,schedule 1 species that has been happening unchecked for years. Killing of dolphin are mostly opportunistic in nature. Many of these mammal meet an untimely death when trapped in the monofilament nylon fishing nets also known as gillnet. Gillnets has layers of fine nylon mesh which catch fish by the gills. The dolphins require rising to the water surface to breathe. When trapped in nets under the water ,dolphins cant come up to breathe leading to their painful death.

However ,more than unorganized fishing ,gillnet fishing is the main culprit behind untimely killing of dolphins told Dr Ravindra Kumar Sinha. Also known as “Dolphin Man” for his four decade old battle to save the gangetic dolphin . Dr RK Sinha was awarded the padma shri in 2016 for his contributions.

Poisoning of water supply from industrial and agricultural chemicals may be a contributing factor towards population decline as their concentration increases in dolphin because of biomagnification.
Climate change and death by strangling in non biodegradable plastics can be considered too as one of the reason for their decreament.
The other significant reason for their decline is the building of more than fifty dams along many rivers , causing the segregation of populations and a narrowed gene pool in which dolphins can breed.

The Ganges river dolphin is important because it is reliable indicator of the health of entire river ecosystem as dolphins live at least in 5ft to 8ft deep water. The ministry of environment and forest declared the Gangetic dolphin the national aquatic animal of India in 2009.

It is listed by the IUCN as endangered on their red list of threatened species. International trade is prohibited by listing them on appendix 1 of the convention on international trade in endangered species. On 20 May 2013, India's Ministry of Environment and Forests declared dolphins ‘nonhuman persons’ and as such has forbidden their captivity for entertainment purposes; keeping dolphins in captivity must satisfy certain legal prerequisites.

Bihar is home to around half of the estimated 3000 Gangetic dolphins in the country.

As an incentive to the fishermen, the government of Bihar has already declared a policy to compensate and reward them if they save Gangetic dolphins from death when the animals get trapped in fishing nets. The compensation will be paid in lieu of the net that the fishermen will have to cut to release the trapped animal. They will also be rewarded for releasing the mammal back in the river.

A stretch of the Ganges River between Sultanganj and Kahlgaon in Bihar has been declared a dolphin sanctuary and named Vikramshila Gangetic Dolphin Sanctuary, the first such protected area.
Asia's first National Dolphin Research Centre is being set to open soon in Patna, Bihar. In an attempt to gauge and tackle the problem of the dramatically depleting number of dolphins. The NDRC would be built in Patna University on the banks of the Ganga, at an estimated cost of 28 crores. The NDRC will play an important role to strengthen conservation efforts and help in research to save the endangered mammal.

On the occasion of the 74th Independence Day, 15 August 2020, the Indian Ministry of Environment, Forest and Climate Change announced 'Project Dolphin' to boost conservation of both river and oceanic dolphins.