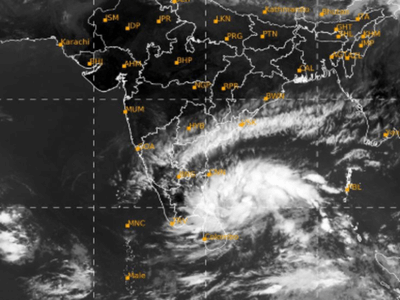 Cyclone Nivar may cross Tamil Nadu and Puducherry in the south-western Bay of Bengal coastal area tomorrow evening, the weather office has predicted. As of 5.30am of Tuesday, the cyclone was located at about 410 kms east-southeast of Puducherry and 450kms southeast of Chennai. “Deep depression has intensified into a cyclonic storm — NIVAR over […]

Cyclone Nivar may cross Tamil Nadu and Puducherry in the south-western Bay of Bengal coastal area tomorrow evening, the weather office has predicted.

As of 5.30am of Tuesday, the cyclone was located at about 410 kms east-southeast of Puducherry and 450kms southeast of Chennai.

At present, the cyclone has weakened into a severe cyclonic storm. It would move northwestwards and weaken further into a cyclonic storm in the next 3hours

The cyclone crossed the coast, now many parts of south coastal AP and Rayalaseema in the are under alert till today evening.

Cyclonic storm Nivar commenced landfall 30km north of Puducherry and 115km south of Chennai around 11.15pm on Wednesday. The core of the storm which hit close to Marakkanam is expected to take three hours to cross over. Heavy rain and winds of 120 to 130kmph, gusting to 145kmph, lashed the coastal areas of Puducherry and Cuddalore. Chennai too saw spells of heavy rain and wind.

Public holiday declared in Tamil Nadu due to cyclone Nivar.

Puducherry Issues Prohibitory Orders, Shops to be Closed till Thursday

The Puducherry district administration imposed prohibitory orders under section 144 of CrPC in this region to prevent movement of people in public places, in the wake of cyclone warning issued by the Indian Meteorological department. All shops and business establishments were directed to be closed from 9 pm on Tuesday to 6 am on Thursday.

Depression over Gulf of Aden and adjoining Somalia weakened into a well-marked low pressure area: IMD

Govt staff instructed to be in their offices to respond to calls for help: Puducherry CM

In a voice message, the chief minister said that he had apprised Prime Minister Narendra Modi of all precautionary steps taken by the territorial government to face the cyclone during a telephonic conversation. Fishermen have been advised against venturing into the sea.

Visuals from Gandhi Beach in Puducherry

Puducherry government Tuesday announced that to prevent loss of life and ensure the safety of general public it will impose a three-day curfew till November 26 as Cyclone Nivar is likely to cross the Tamil Nadu and Puducherry coasts on Wednesday evening. ‘Prohibit the presence or movement of one or more persons in public places in the entire Puducherry region and closure of all shops and establishments from 24-11-2020 9:00 pm to 26-11-2020 6:00 am,’ the release read.

The National Disaster Response Force (NDRF) has sent 30 teams to launch rescue and relief operations for the two states and the union territory, in view of the cyclone Nivar.