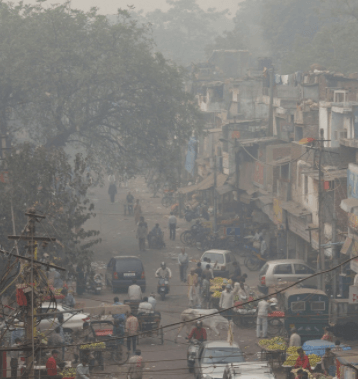 Masks over Masks- Deteriorating Air Quality
October is back with cloud of smoke. The repetitive cycle of pollution has began as the air quality continues to decrease. We must as vigilant citizens help to break this visious cycle.

October enters with a film of smoke in the horizon. The morning air is chilly and is thickly layered with the toxic smog that slowly suffocates the city. Despite the pandemic, roads are blocked bumper to bumper with vehicles producing a variety of harmful gases and construction sites and factories continue to carry on in full swing. The once clear skies of the ghost world seem like a fairy tale, forever lost in the polluted dark skies that look down on the city.

The AQI (Air Quality Index) slowly starts deteriorating from being just unhealthy, to moderately severe and then to hazardous. It happens every year, at the onset of winter thick plumes of poisonous clouds engulf Delhi and other cities across India, more than 60,000 people die every year because of this pollution, schools are shut down, people are advised to stay at home and buy air purifiers, masks, etc.

But this is only looking at it in a short-term perspective, if this happens every year then why are we not learning from our mistakes? It should not be treated as that one rough patch that we get through every year rather it must be removed altogether so that we along with nature do not have to keep facing it. It must be stopped immediately and should not be further procrastinated.

Why is this happening?

First, in order to understand the problem further, we must know what air pollution is. Air pollution is the presence of unwanted particles or gases in the air that make the air toxic and unfit to breathe in. Delhi has been battling this for over decades, this is due to several reasons such as:

1. Stubble burning- Stubble burning is intentionally setting fire to the straw stubble (unwanted part of the plant) that remains after grains, like paddy, wheat, etc.,  that have been harvested. It is an easier and less laborious way to remove the stubble but is adverse affects the environment. It is one of the top reasons for pollution in Delhi.  Since, National capital shares its border with the states of Haryana, Punjab, and Uttar Pradesh the farmers in these states practice stubble burning, they burn huge acres of land, and the wind carries all the smoke, pollutants, and dust particles, which have got locked in the air.

These pollutants reach Delhi and intoxicate the air.  Although recently, scientists at the Indian Agriculture Research Institute (IARI) have come up with a way to tackle crop residue burning by farmers.  They have created the PUSA Decomposer which is a set of four tablets made by extracting fungi strains that help the paddy straw to decompose at a much faster rate than usual, giving farmers the option to shred the straw, spray a solution containing the fungal strains, and mix it with the soil for decomposition, so that it is ecological and reduces the number of pollutants released in the air by stubble burning. Unfortunately, the farmers have not been using this and as a result, we are back at square one.

2. Traffic Pollution- Delhi being one of the biggest metropolitan cities, and having a huge population of 30, 291,000, is highly choked with traffic. Every network of roads that criss-cross the city is congested to the brim at every hour like a system of clogged arteries, proving to be very harmful to the environment. Studies have reported that the fumes from vehicles cause 75% of the pollution.

Cars emit carbon monoxide when the carbon in fuel doesn't burn completely, the car's exhaust emits hydrocarbons, a toxic compound of hydrogen and carbon, and when the fuel burns, nitrogen and oxygen react with each other and form nitrogen oxides which is a toxic gas that pollutes the air. The increase in car congestion worsens this situation.

3. Large Scale Construction- With the increase in population and increasing demands of the people, construction sites have been a common sight in every corner and neighbourhood of the city. This further deteriorates the quality of the air due to the release of large amounts of dust, toxic gases and dirt particles, etc.

4. Festival Crackers- With some of the most celebrated Hindu festivals coming up, crackers become a necessity to burst in order to have a ‘proper celebration’. They become one of the main culprits of poor air quality in the city and though the government has banned the sales of them, people still find a loophole around this. Crackers not only emit toxic fumes but their composition also proves very dangerous

The fine dust that settles after bursting crackers is rich in pollutants like oxides of sulfur and nitrogen, metal dust, and organic pollutants. Their loud noise also creates an inconvenience to people and animals alike.

5. Industrial pollution- Delhi has various industrial estates and each of them is also responsible for the deterioration of the air quality. They produce a huge amount of greenhouse gases. They also produce other harmful gases due to the use of fossil fuels such as sulfur dioxide which is a key ingredient in the formation of acid rain.

In order to bring about a positive change and eliminate the so-called ‘rough patch of the year, we must start pre-planning and helping to solve the problem in little steps throughout the year so it takes off the load during the season of the stubble burning, so if we could reduce the amount of pollution produced through-out the year it would help to reduce the intensity of the bad air quality that happens during specific months especially after festivals.

In order to achieve this, firstly we as conscientious citizens must reduce the amount of pollution that we as individuals emit. Especially since the unprecedented times of the pandemic have given us the opportunity to use cycles more and reduce the number of motor vehicles on the road. Sitting at home allows us to collect our thoughts and reflect on our life choices enabling us to switch to a more eco-friendly lifestyle.

Government policies must also align to this by bringing about solutions to reduce pollution throughout the year and not just after the smog hits. Odd-even can be used as a useful measure in stages through-out the year, more trees should be planted especially along sidewalks to reduce the amount of carbon produced. It should be one of the important traffic rules to switch off the engine at a red light to reduce the toxic fumes produced by cars. Some roads can be temporarily blocked off from cars and other vehicles to promote cycling.

The sales of electric cars should be promoted over diesel and petrol cars. Environmental Management as a subject should be made compulsory and taught across grades to create awareness and look for solutions from the perspective of students of all ages.

Campaigns and protests (if carried out physically precautions must be taken and social distancing norms must be followed, as alternative online strikes and petitions can also take place via social media) can be organized to raise more awareness of this issue, get the attention of the government and change their policies to fit the needs of the degrading environment.

It is a long struggle however we must be strong and put our best and most sustainable foot forward.