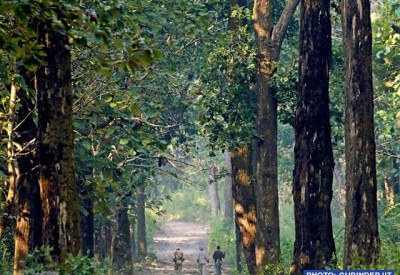 Transfer of 243-acre forest land for expansion of jolly grant airport
1
The move to transfer forest land for airport development comes soon after the Doon Valley is on the verge of losing 2.5K British-era sal trees to facilitate a 4-km stretch of the Delhi-Dehradun expressway.

The Thano Range is a small village located in Forest Dehradun Block of Dehradun district in Uttarakhand. It is situated 15kms from Dehradun's main city and 35kms from Rishikesh.

Surrounded by dense forests, with Queen of the hills, Mussoorie and the gentle sound of flowing river in the backdrop, the picturesque Thano range offers an ideal offbeat travel destination away from hustle and bustle of the city. Trekking, hiking, photography, village tourism, picnic, jungle safari and bird watching are some of the activities well suited for Thano range.

Around 10,000 trees of the Thano range of Dehradun forest division are to be cut for the expansion of Dehradun jolly grant airport.

The Uttarakhand government has sought the National Wildlife Board (NWB) approval to transfer 243 acres of forest land of Shivalik Elephant Reserve to the Airports Authority of India (AAI) for expanding the airport.

The loss of 243 acres will mean more loss of forest and loss of habitat which will further increase human-wildlife conflict.

Thano range is home to not just elephants but also leopards, cheetah, sambhar and several other precious wildlife species.

The area proposed to be given for airport development falls within a 10km radius of the Rajaji National park eco-sensitive zone and notified Elephant corridors are also located within just a 3km radius of the proposed area.

Not only it will be endangering the fragile ecosystem of Doon valley but also shrink the area for the movement of elephants and other wildlife.

“Forests and wildlife are the unique selling proposition of Uttarakhand’s tourism and employment. It is highly unfortunate that they are doing the opposite said Gauri Moulekhi, secretary of uttarakhand chapter of NGO, people for animals. Adding “with the forests and wildlife gone,one piece at a time and consequent shrinking tourism ,who will ever need larger airports? It will be a death blow to the species, already reeling under the adverse impacts of inbreeding due to loss of corridors.

Apart from this 2500 trees of British era over a century old most of which are sal trees, are also on the verge of cutting down for the Delhi-Dehradun expressway stretching over a range of 4 km. It will cause irreparable damage to the shivalik range,causing its slope to become unstable and more prone to soil erosion.

Experts say the British-era trees, some of them 100 to 120 years old, would be nearly impossible to regrow and regenerate as they have “reached their climax”.

Environmentalist Ravi Chopra said, “The slopes of the Shivalik ranges are extremely prone to erosion and therefore need a green cover to remain stable. Cutting the trees here and planting them “elsewhere” will not save these slopes. The instability of the slopes will become a critical issue.”

Experts say that the small Himalayan state has witnessed extensive fragmentation of wildlife due to deforestation.