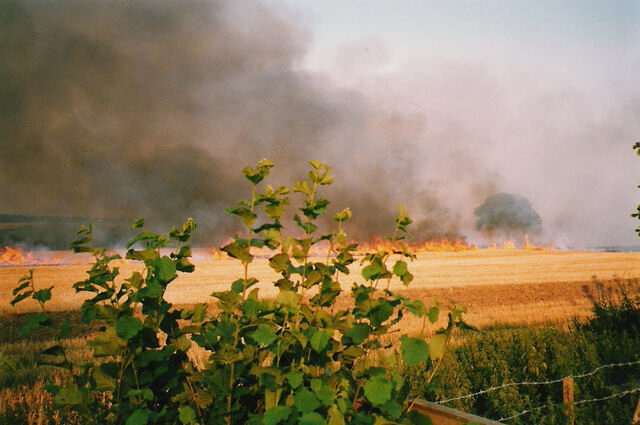 This is Air-Pollution Emergency-Stubble Burning
In the midst of the Covid-19 Pandemic, the Indian Government does not look to take the burden of another crisis. The economy is Collapsed, so many Natural Disasters, etc have made the situations worst than ever before for the governments. I’m talking about the consequences of Stubble Burning. Global Day of Action For Climate Justice […]

In the midst of the Covid-19 Pandemic, the Indian Government does not look to take the burden of another crisis. The economy is Collapsed, so many Natural Disasters, etc have made the situations worst than ever before for the governments.

I’m talking about the consequences of Stubble Burning. Global Day of Action For Climate Justice has passed and the Indian Government has still not taken any action to Solve the Climate Crisis. That is why still the country is facing the worst impacts of the Climate Crisis. People are dying. Lungs of India are depleting because of wrong Environmental Policies. The government is giving auctioning to the Coal Mining as a part of their campaign- “Atma Nirbhar Bharat.”

Now we’re going to become victims of another Crisis. The NASA satellite images showed about seven fresh fires in the farmlands of Punjab between September 13 and 16, hinting at the start of the stubble burning practice by the farmers.

Farmers in Uttar Pradesh and Haryana have also started burning Stubble. Every year in the winters, clouds of New Delhi and its surrounding region called Delhi-NCR get covered with the poisonous Smoke. The smoke comes from Industries, Factories, Cars but majority of it comes from the Stubble Burning by farmers in North-India. The farmers burns the Stubble from harvested Paddy Crop because they thinks that it helps to control Pests for the next crop. The fact is right but it is also the fact that it pollutes the Environment.

According to an August 2019 study titled ‘Fields on fire: Alternatives to crop residue burning in India,’ published in the journal Science, farmers in northwest India burn around 23 million tonnes of rice straw so that they can clear the land quickly for the sowing of wheat.

Last year’s stubble burning in Punjab and Haryana had contributed to 44 percent of the pollution in NCR Delhi, according to System of Air Quality and Weather Forecasting and Research (SAFAR), the Ministry of Earth Science.

Smoke produced by burning Stubble affects the process of Photosynthesis. It also affects the Soil Fertility. The nutrients present in the stubble are wasted in burning and farmers have to spend on chemical fertilizers to maintain soil quality. Burning leads to the ground temperature rising and the soil drying up, necessitating additional water for irrigation. Livestock, too, is impacted by crop burning.

The effects are devastating. Last year, air quality monitoring stations in Delhi-NCR registered above 999 on the Air Quality Index, which is way beyond emergency levels. Schools and offices are forced to shut down for days. From October to December 2019, air quality in New Delhi and other cities in north India reached up to 20 times higher than the safe levels defined by the World Health Organization. Experts said breathing the air in New Delhi is equal to smoking 50 cigarettes a day.

It is enough to say that we’re now a addict of Air Pollution. We knows what’s causing pollution. And we have the Solution to this . This kind of Ignorance is bad than the Addiction of Drugs. Each year Governments Spent Millions of Rupees to control Pollution but still it’s unable to control the pollution.

Are there any solutions? The government should provide some of the Stubble to the Small Scale Industry in making mats, carpets as a part of Vocal For Local.

Governments should Invest in making Bio-Degradable Plates and Papers from the stubble instead of investing in Polystyrene (Thermocol) Plastic Plates.

This is the reason why I’m Saying that India is not so far away from declaring an Air Pollution Emergency because of the failure of Government each year in stopping Stubble Burning.