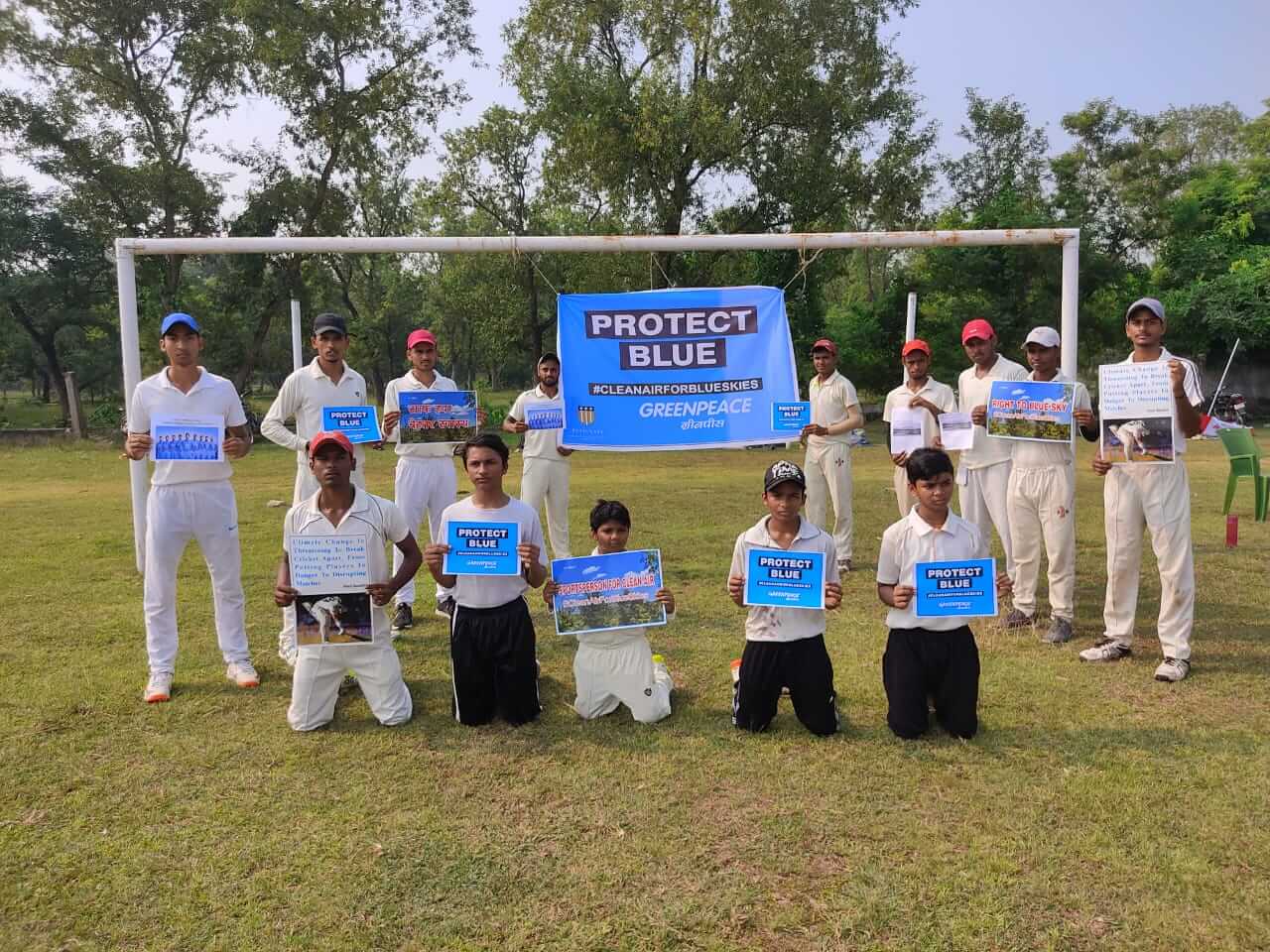 Cricketers and Volunteers all for Clean Air for Blue Skies
Passion for cricket surpasses heat and humidity. This is for the first time in the past five months that players have hit the ground for an exhibition match.

It’s a bright sunny day. Magadh University Hospital ground, around three kilometers from Mahabodhi Temple in Bodhgaya, has geared up for cricket training. The outgrown grasses in the outfield, however away from the thirty-yard circle are no worry for the teams. Passion for cricket surpasses heat and humidity. This is for the first time in the past five months that players have hit the ground for an exhibition match.

They thank the government for the unlock and allow them to carry on their practice sessions. Support staff conducts a temperature check at the entry of the ground. Their hands and kit bags are sanitized. The management has laid down certain protocols such as players would not gather together for celebrating or cheering on fall for a wicket, they will have to put up a mask in the dressing area, kits must be placed at an adequate distance, no public would be allowed to gather in the ground, etc.

I was lucky enough to witness how India’s most loved sports had changed under COVID protocols. Anyway, this year's IPL would be played under such restrictions only.

At 9 in the morning, after the completion of formalities, I see the Professional Cricket Training Academy (PCTC)  players make their way out to the middle. They are followed by the PCTC-I openers Mrityunjay and Rohit Ranawat. They need to get PCTC-I to a good start if they want to give PCTC-II a decent target. Ajit Kumar will start the proceedings for PCTC-II.

Chopped on, but the bails remain intact! What a stroke of luck for Rohit Ranawat. Terrific start for Ajit Kumar. The ball is on a good length on off,  looks to defend but gets an inside edge on it. The ball hits his boot and hits the stumps behind. But the adamant bails won't fall.

Ajit is able to swing the ball. Will he bowl out the PCTC-I skipper? We will have to wait and see as he runs in to bowl the second ball.

PCTC-1 is underway! This time ball hits the pad. The ball continues to swing for Ajit Kumar. Perhaps, Rohit needs to change the strike before he is waved off to the pavilion. This time, Rohit works the ball towards square leg where Amit makes a diving stop and ensures it is not more than a single.

..and the match continues.

The most heartening part of the match was that it was organized on the eve of the first International Day of Clean Air for blue skies, cricketers at Professional Cricket Training Academy, Gaya demanded the right to clean air. In recent years, air pollution has become one of the most pressing issues globally making it the third-largest cause for premature death. In order to raise public awareness of how clean air is important for health, productivity, the economy, and the environment, last year, the United Nations General Assembly during its 74th session, adopted a resolution to organize an International Day of Clean Air for Blue Skies.

Cricketers also cited the Hit for Six report released last year, which highlighted that ever-rising temperatures and extremes of rainfall are increasingly putting at risk India’s most loved sport Cricket. The report combines climate science with heat physiology and accesses the global impact of climate change on cricket. It particularly mentions how batsmen and wicket-keepers are increasingly susceptible to poorer performances.

Commenting on the need for clean air for a sportsperson, PCTC Founder and Head Coach, Satyam Verma said, “Air pollution is a public health emergency. If one talks in the context of Gaya, a global air pollution database released by the World Health Organisation in 2018, rated Gaya as the fourth most polluted city in the world in terms of the concentration of fine particulate matter or PM 2.5. The report said Gaya's PM 2.5 level was 149, much higher than the prescribed WHO standards. The annual Airpocalypse reports by Greenpeace too have highlighted the worsening air quality in the cities."

During the nationwide lockdown, a significant reduction in PM 2.5 across the cities was observed because of the temporary slowdown of economic activities. We are aware that blue skies were unintended outcomes of the lockdown and it had come at the expense of a huge crisis that many are still bearing the brunt of.

Not only this, volunteers across the country, in around 30 districts hit the streets to demand clean air for blue skies. Some moving images also emerged as volunteers dressed up in traditional dresses photo-oped in front of the iconic buildings.

“It’s very heartening to see cricketers and volunteers across the country demanding clean air. The first international clean air for blue skies must be a moment for all of us to acknowledge that human activities such as burning fossil fuels in transport, and the energy sector are the major sources of air pollution. The governments and local authorities in the post-COVID-19 must envisage policies that move us towards better by transitioning from fossils to renewables. Public investments should focus on tackling climate change and expand the dimensions of sustainability from the environmental perspective to protect public health,” said Avinash Chanchal, Climate Campaigner at Greenpeace India.