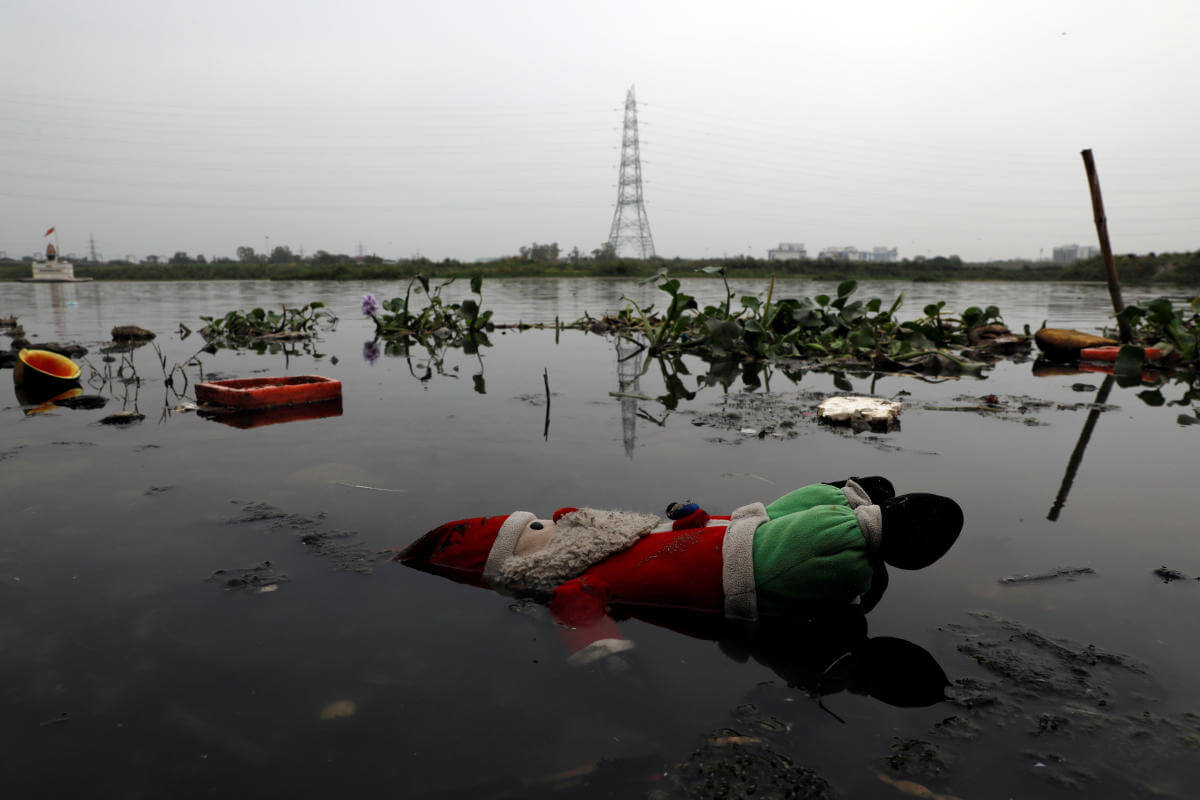 With no adherence for its sanctity, the Yamuna flows polluted as ever
The Yamuna holds a special significance in Hindu mythology. Bathing in River Yamuna frees one from the torments of death, according to the beliefs of Hindus. But with the growing population, pollution, sewage and industrial waste, the river has now turned lifeless.  The river being the main source of water for Delhi is one of […]

The Yamuna holds a special significance in Hindu mythology. Bathing in River Yamuna frees one from the torments of death, according to the beliefs of Hindus. But with the growing population, pollution, sewage and industrial waste, the river has now turned lifeless.

The river being the main source of water for Delhi is one of the most polluted rivers in the country. The largest tributary of the river Ganga, flowing for 1376 km and, Yamuna makes 40.2% of its entire basin. Not only do more than 57 million people depend on its waters but also the river creates an ecosystem for biodiversity to flourish.

We have felt an urgent need to share the story of the river as it is the sole water resource for the 17 million people of the national capital and hence deserves their immediate attention and not a blatant denial for the maintenance of its sanctity, but sorrowfully the situation looks otherwise.

Delhi: a metropolis exploiting the Yamuna

We have observed that Yamuna water is relatively less polluted before entering Delhi via the Palla region but as it proceeds into the city, its water quality consistently deteriorates. As the river moves out of the national capital, its water is unfit for any use.

“What leaves Delhi at Okhla is also no river. It's just a toxic mix of Delhi and Ghaziabad sewage & industrial waste”, says Manoj Misra, head of Yamuna Jiye Program.

Astonishment lies in the fact that despite holding just 2% of the total river basin, as per the conclusive report of the Yamuna Monitoring Committee (YMC), Delhi is responsible for more than 75% of pollution the river suffers from.

What happens as the river transitions into the National Capital Territory (NCT)?

Yamuna basin is stretched for about 56 km in the National Capital Region(NCR). In the length of 22 km between Wazirabad and Okhla barrages, about 22 small and gigantic drains discharge their effluents into the river. Some drains like Najafgarh, Tughlaqabad, Barapullah, Ghazipur, and Western Yamuna Canal are considerably proportionate to the volume of Yamuna water.

Due to high potable water stress in the metropolis, minimal water is released from the Wazirabad barrage for maintaining its E-flow, especially in the dry seasons. Hence, most of the water received by the Yamuna in Delhi comes from these contaminated drains and therefore they make more than 95% of the share of the capital’s contamination into the waterbody.

More than 748 million gallons(MGD) of sewage is generated in Delhi per day and 32 functional Sewage Treatment Plants (STP) can treat only around 490 MGD. As reported submitted to the National Green Tribunal (NGT), 58% of the total waste generated gets dumped in the river untreated.

With such irreparable harm caused by the drains, one might wonder why were these even constructed? Ironically, these drains were created for human welfare.

These are actually seasonal stormwater drains which are meant to translate rainwater into river Yamuna during downpours to prevent flooding in the whole city. Additionally, these drains supply water to the river for providing flow in the mainstream.

Human intervention by industrialization and inadequate waste disposal has made the water quality in the city's drainage system to deteriorate tremendously. A comprehensive 2018 study from IIT Delhi states that until 1976, 201 natural drains discharged water in Delhi’s share of the river but by 2018, 19 of them disappeared and most of the remaining ones were converted into sewers.

Pollution at such a high level is never caused by a single agent, rather it is a cumulative impact of multiple sources intoxicating the water body.

Similarly in the Yamuna, the alarmingly high rates of pollution are due to negligence from various sources that refuse toxics in the river.

Household and Municipal Wastes in Delhi

Until 2014, it is shocking to note that more than 46% that accounts for 4.5 million of National Capital's population lacked an adequate waste disposal system. As per the NGT appointed CPCB panel, more than 90% of the household waste reaching the Yamuna via stormwater drains is untreated. Major contributors to pollution from these households are greywater, blackwater(faecal water), soaps & detergents, paper, and plastic.

As stated in the YMC report 2020, "In some places some JJ s clusters/isolated jhuggies have sprung up which release sewage directly into the drains. Permitting JJ clusters to come up downstream of the point of trapping defeats the very purpose of trapping of drains." The analysis clears the ill effects of encroached lands on compliance and how household wastes make trapping of drains ineffective.

Large produce of municipal waste, due to incompetent solid waste management of the city, is jettisoned in the river which is adding debris in the river bed. As per the current statistics, household and municipal wastes is the largest quantitative contributor of organic, inorganic, and plastic wastes in the river body and are significantly responsible for the turbidity and froth brewing over the river.

As per NGT order dated 02.03.2015, "Hazardous waste generated at the CETPs should be disposed of at the designated hazardous waste sites and no drains should carry industrial effluents."

The city was in dire need of this decision as after the household wastes, second in line come the industries functioning in the urban city. Those industries running without complete compliance for the sanctity of the river also have a major influence on its retarding health.

According to the Delhi State Industrial and Infrastructure Development Corporation Limited (DSIIDC) report, a total of 910 units of industries connected to these drains were recognized and penalized for contaminating the drains with pollutants like grease, acids, oil, plastic, and other toxic chemicals.

The expert committee appointed by the NGT submitted a report further stating that out of the 28 industrial clusters present in Delhi only 17 are connected to 13 common effluent treatment plants (CETP).

Additionally, this report highlighted that 22 industrial units are directly releasing the produced junk into the stream. Most such industries were located in Okhla industrial area. These industries include paper, metal finishing units, chemical units, distillery, pharmaceuticals, textile industries, and thermal power stations.

Religious Offerings and other refuse

A major undetected source of pollution in the Yamuna is agricultural runoffs. While practising unskillful farming on the encroached floodplains of the river Yamuna, some peasants use chemicals like pesticides, fertilizers like urea and DTT inadequately for cropping. Percolation of toxic and nutrient-rich water from these fields remarkably alter the composition of dissolved compounds in the river.

Some of the other most commonly known types of pollutants are religious oblations. The river throughout its course receives heavy immersion of religious offerings such as residues of pyres, flowers, idols, clothes, plastic items, etc. These offerings are an additional reason for trouble to the already befouled river.

Every adulterant in its share contaminates the river. The concern lies not in the production of these wastes but in their coalescence with the river. The only way to keep the river sustain its flow without disappearing is by minimizing the impurities blending into it.

It is clear now that the Yamuna along with its water carries a humongous amount of diverse pollutants stagnating the downstream. Despite being a 'source of life' for many, negligence at our part has risked the river's future.

We call the Yamuna 'a mother' because it is our only lifeline for water requirements yet we have ruined the river water to an extent that it appears irrevocable. With waste merging perpetually like slow poison, the river's resolving into the Earth seems inevitable!

(The Trickling Stream of River Yamuna is a digital campaign under Ailing Delhi that critically analyses reasons for pollution in the Yamuna River and provides solutions of both macro and micro levels to make it change. In the next article, we shall depict the nature of these impurities and the damage they’ve caused to the river and humans.)