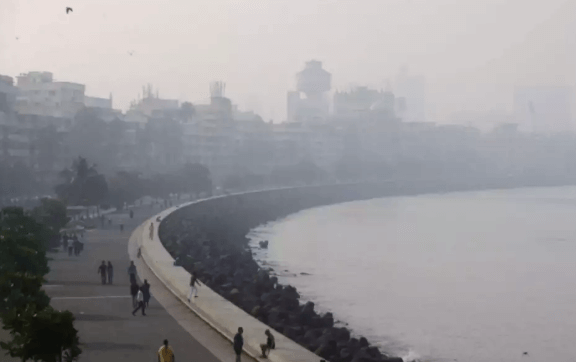 Mumbai’s air pollution is worsening with time
Air pollution has worsened in Mumbai, with the city reporting ‘poor’ air quality for several months now. ‌A study released by the Centre for Science and Environment (CSE) last year said that Mumbai’s air has the highest concentration of PM10 – a particulate matter of size 10 microns – among 24 cities in peninsular India. Another […]

Air pollution has worsened in Mumbai, with the city reporting 'poor' air quality for several months now. ‌A study released by the Centre for Science and Environment (CSE) last year said that Mumbai’s air has the highest concentration of PM10 - a particulate matter of size 10 microns – among 24 cities in peninsular India.

Another study has said that Mumbai has seen an 80% increase in the concentration of PM10 between 2007 and 2018, making it the most polluted of the country’s three major coastal cities (Mumbai, Kolkata, and Chennai). PM10 levels in 2018 were also the highest in 20 years.

In fact, an artificial lung was installed near RD National named as "The Billboard that Breathes "a few weeks ago.

In a span of two weeks, the lungs turned black from white. High levels of particulate matter in the air, caused in large part due to vehicular emissions and dust was all trapped in the HEPA filters. ‌‌

Is the government doing anything? ‌

Mumbai has had a lethargic attitude towards air pollution. Despite the alarming statistics, Mumbai has no plans in place to tackle air pollution. The Central Pollution Control Board has rejected pollution mitigation plans prepared by the state pollution body for the city, calling them inadequate.

After the Maharashtra Pollution Control Board was asked to revise the plan, environmentalists and citizens suggested that the plan should focus on pollution sources like industry, transport, construction and garbage burning.

The government allocated Rs. 4400 Cr for clean air which is just 00.14% of the total budget. Is our life so cheap? ‌‌

What are the causes of air pollution? ‌

1. Burning of Fossil fuels: The overuse of fossil fuels is killing the environment as dangerous gases. ‌

2. Exhaust from Factories and industries: Release of a large amount of chemicals is thereby depleting the quality of air ‌

4. Indoor Air Pollution. ‌‌What are the effects of Air pollution?

According to WHO, one-third of deaths are from stroke, lung cancer & heart diseases. And today the head of the NHS has warned that air pollution is now a health emergency. Every three minutes a child dies due to air pollution in India. ‌

I honestly had no idea before that a staggering nine out of ten people breathe polluted air. I would have said one in ten. ‌Air connects us all and without air there is no life.

Sooner or later, we will have to recognize that the earth has rights too, the right to live without "POLLUTION" . We can't stop breathing but we can do something about the quality of air.

The environment will continue to deteriorate until pollution practices are abandoned, it is time for us to ACT. ‌

BE A PART OF SOLUTION, NOT A PART OF THE POLLUTION. ‌#beatairpollution.

(Sneha is currently pursuing engineering (first year) and is a part of Fridaysforfuture since last year. She tries her best to live a sustainable life and reduce carbon footprints in all ways possible.)