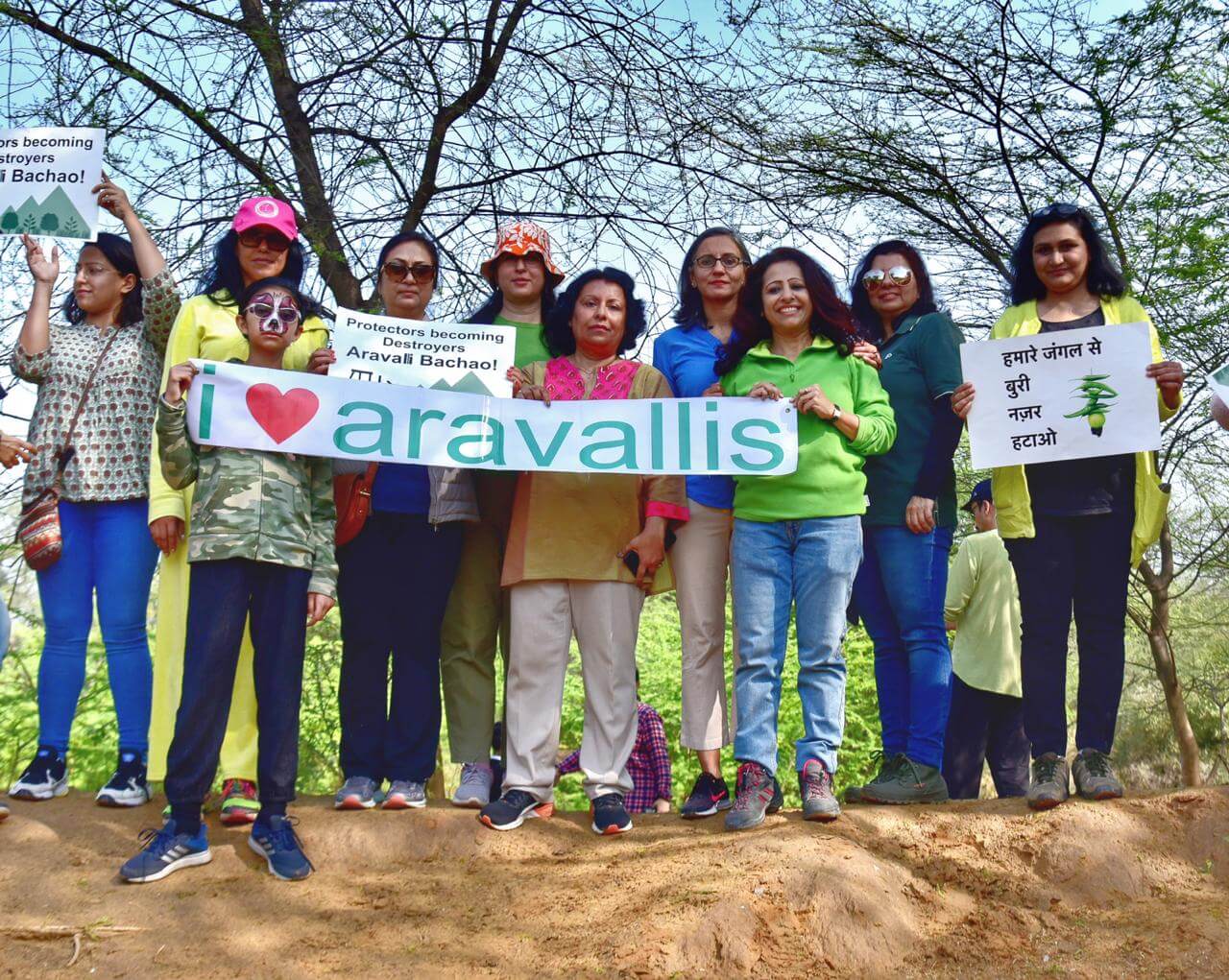 Aravalli Calling: Hugs for trees as citizens protest against PLPA
To mark the one-year anniversary of the disastrous Punjab Land Preservation Act Amendment by the Haryana government in February 2019, more than 100 citizens from the National Capital Region including college students from Delhi University came together to hug the trees, sing songs, recite poetry and embrace the last remnants of the Aravalli forests. The […]

To mark the one-year anniversary of the disastrous Punjab Land Preservation Act Amendment by the Haryana government in February 2019, more than 100 citizens from the National Capital Region including college students from Delhi University came together to hug the trees, sing songs, recite poetry and embrace the last remnants of the Aravalli forests.

The event ‘Aravalli Calling’ was held in the forest behind Suncity area in Gurgaon on Sunday, 1st of March 2020 with the aim of creating awareness about the importance of the Aravallis and the impending threats to them and also to remind the government of its responsibility towards preserving the state’s flora and fauna, said Rahul Khera, one of the organizers from the Aravalli Bachao Citizens Movement.

The event started with citizens forming a human chain on a recently encroached and flattened land, which used to be part of the Aravalli forest till a few months back. Holding hands at the periphery of this encroachment, people showed their commitment to not let this encroachment go any further into the forest and to reclaim the encroached land and revive it through native Aravalli plantation.

Slogans such as “We will save our Aravallis, our healing forests”, “We love Aravallis, our lifeline for clean air and water security” reverberated through the air.

“We are gathered here to form a human chain against the backdrop of the Aravallis and Gurgaon's skyscrapers - a stark reminder of what is at stake. The idea is to bring focus on the plight of the Aravallis threatened by illegal tree felling and constructions and educate people on how the regressive amendments made to the 118-year-old Punjab Land Preservation Act (PLPA) will open up nearly 60,000 acres of the Aravalli hills to real estate development. In a state that already has the lowest forest cover in India of a mere 3.6%, the PLPA Amendment Bill is the final death knell,” said Gaurav Sarup, one of the Aravalli Bachao campaigners.

Citizens then proceeded for a walk into the forest, where Professor Robin from Delhi University informed the group about the ecology of the landscape, including how to differentiate native and invasive tree species. Inspired by Sunderlal Bahuguna and the women of Uttarakhand, the group then re-enacted the Chipko Andolan of the 1970s, in a symbolic commitment of their love for these urban forests.

By this time the forest had begun to weave its magic across the group. People sang odes to the trees celebrating the life-giving entities. Ayush, Anurag, Zenith, Megha, Sarika, Gaurav, Rahul, Vikas and many others articulated their sentiments in poetry. Megha Consul recited David Wagoner’s poem called Lost.

“If what a tree or a bush does is lost on you, then you are surely lost. Stand still. The forest knows where you are. You must let it find you.”

Dr. Sarika Verma recited her adaptation of Rabindranath Tagore’s famous poem, “Where the mind is free’ addressing Mr. Khattar, Chief Minister of Haryana: “Where the breath is without the taste of smoke and PM 2.5 is low, where lungs don’t shrivel up and arms don’t reach out for the nebulizer.
Where the mind is thinking straight and free into clear skies and lush green trees…into that heaven of freedom, Mr. Khattar, let my Gurgaon awake”

Incidentally, March 1st also marks the one-year anniversary of the Supreme Court order to repeal the PLPA Amendment. While the Haryana government has gone ahead with impunity in defiance of SC’s directive not to take any action on this amendment by getting the bill signed from the Governor in June last year, the citizens have sworn to protect the Aravallis, the shield that acts as a natural barrier against the dust storms coming from the Thar desert.

“The citizens of NCR are not going to give up on these forests. As people who have brought this government into power, we demand that the government takes back this disastrous Amendment to protect 60000 acres of forest, notify the remaining 50000 acres of Aravallis in South Haryana which have no legal protection, increase Haryana’s abysmal forest cover of 3.6% to 5% in the next 5 years and increase forest check posts and surveillance by drone cameras to put an end to illegal encroachments in the Aravallis,” said Zenith Chaudhary, one of the Aravalli Bachao campaigners.