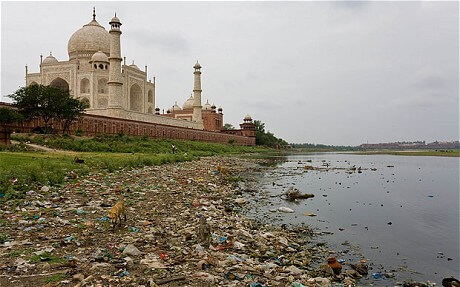 Why the Yamuna needs to be an agenda in the Delhi election?
1
The environmental crisis is not something which we have to face in the near future, it has already knocked our doors. May it be air, water, soil or any other medium we are witnessing a drastic change in our surroundings. This year during November The Ministry of Earth Sciences’ air quality monitor, SAFAR, said the […]

The environmental crisis is not something which we have to face in the near future, it has already knocked our doors. May it be air, water, soil or any other medium we are witnessing a drastic change in our surroundings. This year during November The Ministry of Earth Sciences' air quality monitor, SAFAR, said the city's overall AQI reached as high as 708 around, which is 14 times the safe level of 0-50.

Although the condition has improved (still much above the recommended level) now but still the damage done is irreplaceable. The level of water pollution is at its peak. Waste dumping, oil spillage from tankers, etc. has led to the extinction of many aquatic animals and changes in the ecosystem.

Among another such issue, one of the most significant is of River Yamuna.

River Yamuna originates from Glacier Yamunotri from Uttar Kashi in U.P and has an elevation of approximately 6387 meters. It has a total length of around 1370 km and is the largest tributary of the Ganga River in North India. The Yamuna is the principal source of water in mountain ranges. It flows through states of Delhi, Haryana, and Uttar Pradesh before merging with the Ganges in Allahabad.

Right from its origin to its amalgamation in Ganga, the water quality goes on deteriorating. The central pollution control board (CPCB) has recently identified Yamuna as one of the worst polluted rivers in the country. CPCB in one of its other report has stated Yamuna water quality is worst at Okhla and Nizamuddin Bridges, the same report says that level of dissolved Oxygen in the Yamuna was less than 4MG/L and it was 0.0 MG/L at few locations downstream of urban settlement due to discharge of untreated and partially treated wastewater. Such is the condition of the Holy River which is widely worshipped by devotees.

Why is Yamuna so polluted?

Discharge of untreated or partially treated domestic and industrial wastewater is poured down into the Yamuna through more than 1700 drains. There are thousands of industries located on its bank at Delhi, Mathura, Faridabad, and Agra they dump the immense amount of untreated effluents into the river directly.

A report of CPCB indicates that there are about 42 industrial units in Delhi only which is polluting the river directly. According to a survey, Delhi contributes 23 percent of total waste generated by class I Cities (cities having a population of 1 00,000 and above), this is 47 percent of 101 class I Cities.

And a major chunk of this waste is disposed of in the Yamuna. This also results in an increase in level of Ammonia in the river. Ample amount of agricultural activities takes place in its catchment area, during summer when river shrinks there is a lot of farming activities on its bank thus directly contributing pesticide residue in the river.

As per reports of Yamuna Action plan, the content of suspended solids in the river is around 1000-10,000 mg/L which should not be more than 100 mg/L. The reason behind this is the high density of population living in cities and dumping untreated water and solid wastes into the river, these waste are generally composed of human fecal matter, cow dung and other solid waste generated from various colonies of Delhi, Noida, Sonepat, Panipat, etc.

Every year lakhs of people take holy baths in the Yamuna and leave behind them Idols made of Plaster of Paris, account books, human excreta polythene bags, worship materials and so on, which increases suspended materials in water.

Zero levels of oxygen in the Yamuna river

It is only be used for recreation purposes or Industrial cooling. Water has become toxic and the level of oxygen has gone as low as zero, leading to the mass death of fishes, the condition has become such that hardly any existence of fishes is reported now. Affecting thousands of people in coastal areas who were dependent on the river.

Due to large scale dumping and uneven flow of water from the hilly region, water in the Yamuna remains stagnant for approximately 9 months a year, as this contaminated water seeps in underground water also get affected. People worship Yamuna and take holy baths here, causing various problems to them too. To summarise it, we can say the Yamuna which was once a life-giving river has reduced to a small stream draining industrial effluents, dirt, sewage, and other toxic substances.

Are there any solutions?

Cleaning Yamuna is a war that cannot be won overnight. It’s a long battle and both government and citizens have to work hand in hand in order to curb this problem.

Firstly, people should sensitize themselves about the issue. They have to take the initiative and stop throwing domestic waste into rivers, they should stop dumping idols made of plaster of Paris into the river as it does not gets dissolved. There are many programs sanctioned by the state and national government which is not visible on the ground.

Catchment area delineation is an important component of water quality management. In order to reduce pollutant loadings at an outfall, it is necessary to examine and improve water use practices in the areas where pollutants originate. Instant ban on untreated industrial dumping should be imposed, and strict rules should be made for imposing the same.

Steps must be taken to relocate the existing settlements near the flood plains and no further encroachment should be allowed. Last but not least it should be the government’s duty to increase public awareness.

Should it be an agenda in Elections?

Yes! Environment is not something which can build in 4 or 5 years, it takes decades. It is our fundamental right to have a clean environment, and its duty of government to provide us with the same. Moreover, it is high time to make the environment our primary concern because it’s already too late now. “We the people” are beneficiary here we should stand and ask our representatives if not today, then when? It’s high time act now!