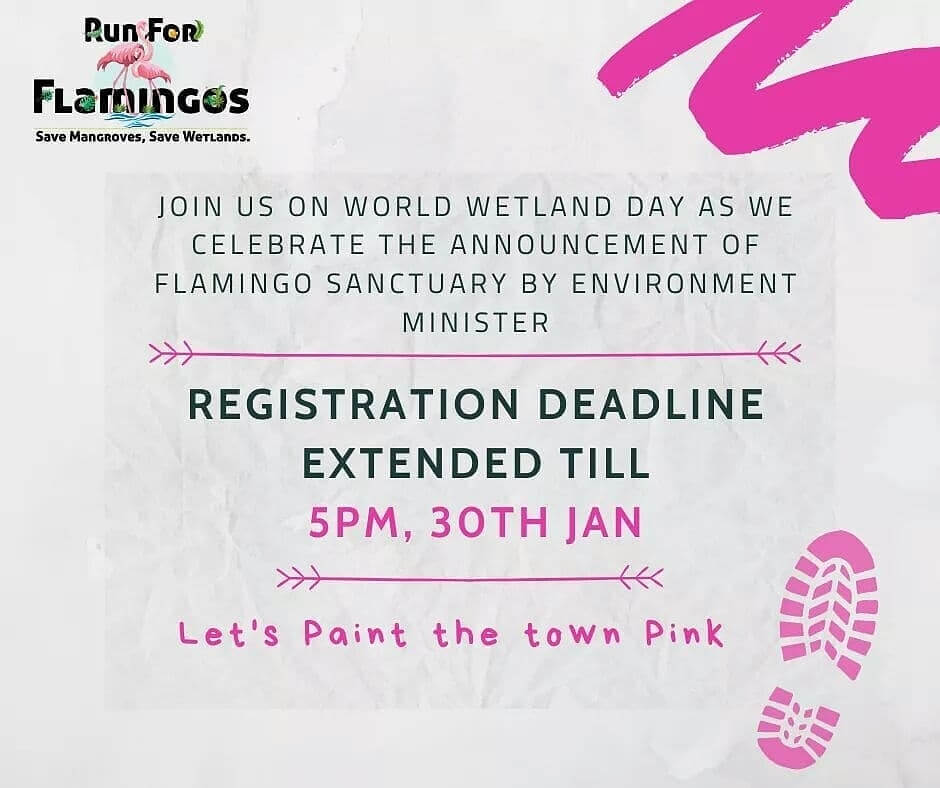 Mumbai set to Run For Flamingos on World Wetlands Day
With the ever-increasing destruction of wetlands in Navi Mumbai, residents are all set to put on their running shoes on World Wetland Day to create awareness about wetlands, mangroves, and the visiting flamingoes. Mumbai has lost a lot of its mangroves due to reclamation, encroachment, and garbage dumping, among other causes. The International Union for […]

With the ever-increasing destruction of wetlands in Navi Mumbai, residents are all set to put on their running shoes on World Wetland Day to create awareness about wetlands, mangroves, and the visiting flamingoes.

Mumbai has lost a lot of its mangroves due to reclamation, encroachment, and garbage dumping, among other causes.

The International Union for Conservation of Nature says mangrove forests, along with other coastal wetlands like tidal marshes and seagrass meadows, are long-term carbon sinks, storing carbon in the plants themselves but more importantly in the soils below for thousands of years. It can help control global warming by reducing carbon dioxide (CO2) levels in the atmosphere, according to scientists.

These ecosystems also are important in coastal protection, habitat, food security, biodiversity, and tourism. The world is losing coastal wetlands on a large scale.

Studies have shown that the city is losing its mangrove forests. A study by Godrej and Boyce estimated that private mangrove forests in their industrial estate in Vikhroli absorbed 50,000 tonnes of CO2 annually. It found that mangroves and the soil they are rooted in have absorbed thousands of tonnes of CO2 from Mumbai’s air, effectively cleaning the air of emissions released by vehicles, industries and unsafe burning of wastes.

Keeping all this in mind, ‘Run for Flamingos- Season 2’ is being organized by Save Navi Mumbai Environment Group and Wandering Souls to celebrate World Wetlands Day on 2nd Feb 2020 to once again create awareness and to educate people about the importance of mangroves, wetlands, and flamingos and to give maximum publicity to Hello Forest 24x7 helpline number 1926.

The event will also spread the strong messages to highlight essential environmental issues like the right way to dispose of E-waste, the importance of proper waste segregation and recycling, ill effects of plastic overuse and its long-term damage to the environment and importance of having clean surroundings.

Navi Mumbai is blessed with a number of Wetlands and mangroves that have been protecting Navi Mumbai from floods. However, people are not aware of the important role played by these ecosystems.

Last year, we celebrated Bombay High Court order which had scrapped the Golf Course and Residential Towers project planned by the destruction of 33 hectares of  Wetlands in Nerul and this year we are celebrating the announcement by Shri Aditya Thackeray, Environment minister to declare these Wetlands as a Flamingo sanctuary.

The run is planned in and around precious mangroves and wetlands of Navi Mumbai which is rich in biodiversity, having reserved mangrove forests and habitat of many bird species including migratory birds like flamingos. Around 1500 to 2500 runners of different age groups and gender are expected to participate in the event of a 1 km carnival run and 5 km, 10 km and 21km run.

The last year's event season one of Run for Flamingos was very successful with the participation of more than 1500 runners.