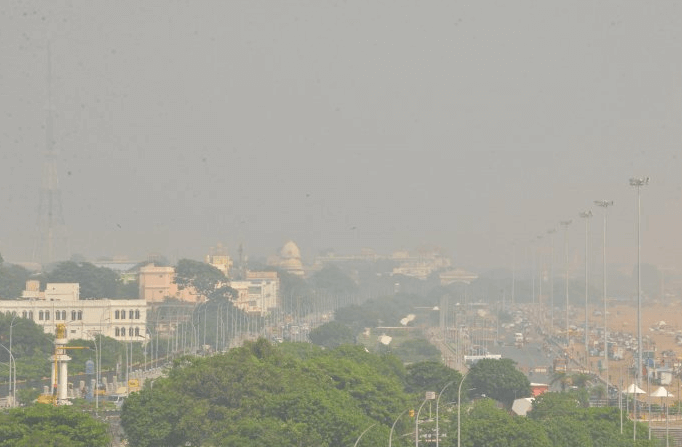 Chennai is Choking!
SO2 combined with other particles can infiltrate your lungs, damage its lining, and cause respiratory conditions like asthma and even worsen heart disease

As a resident of Chennai, if you have suddenly been feeling breathless more often, find that you can’t run even short distances without panting, or huff and puff your way up the stairs, you may have more reasons than your fitness level to blame.

One of the key factors that could be taking a toll on your breathing capacity is air pollution. The presence of particulate matter in the air can cause a range of issues. Especially worrisome among these is a toxin called Sulphur dioxide (SO2), which can cause wheezing, coughing, breathlessness, irritation of the eye and respiratory system even with short-term exposure.

India is the largest emitter of SO2 in the world: Study

In the long term, SO2 combined with other particles can infiltrate your lungs, damage its lining, and cause respiratory conditions like asthma and even worsen heart disease. In large concentrations, it can lead to pulmonary oedema, a life-threatening condition where a fluid accumulation in the lungs leads to its failure. Children and the elderly are especially at risk from SO2 because of their vulnerable immune system.

A Greenpeace study from August 2019 found that India is the largest emitter of SO 2 in the world, contributing to over 15 per cent of all human-induced causes for this toxin. Chennai ranks number seven among all Indian cities.

If you’re wondering what the top-most contributor to SO2 emissions is, well, that’s no rocket science. It is fossil fuels, of course! Burning coal in power plants and other industrial units releases the maximum amount of SO2 into the atmosphere.

While some natural phenomena like volcano eruptions also lead to SO2 emissions, about 60 per cent is due to anthropogenic factors.

Chennai is home to one of four coal-fueled thermal power plants in Tamil Nadu, which dump generous amounts of SO 2 into the air in its surroundings. The annual SO 2 emission in Chennai for 2018 was found to be 215 kilotons per year, which is five times that of the amount in Mumbai.

It is no surprise then that respiratory conditions like Chronic Obstructive Pulmonary Disease are on the rise.

The good news though, is that there may be a solution, at least in part, to this issue. Installing thermal power plants with a flue-gas desulphurization technology can reduce the Sulphur levels from the exhaust gas.

Although the government had put in place a plan, requiring all thermal power plants in India to have an FGD system by 2017, a Supreme Court order extended the deadline to 2022 for some units.

Pushing back these deadlines can have severe consequences for the public. The World Health Organization has estimated that air pollution caused 4.2 million premature deaths worldwide in 2016. Closer to home, the environmental think tank Centre for Science and Environment found that the average life expectancy of a person living in India has dropped 2.6 years because of air pollution-related diseases.

While we as individuals might be doing everything in our capacity to remain healthy, the environment around us is not conducive enough. Air pollution is not just a climate change issue or a community-specific problem to deal with.

The everyday lives of individuals are being affected. The clock is ticking. The time symbolic gestures have long passed. The government needs to stop its mollycoddling and enforce a strict plan that tackles the problem we reach a point of no return.