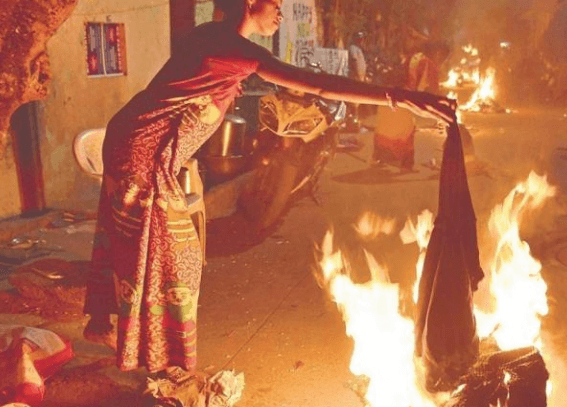 When I came to Chennai from Patna in 2008, I suffered from serious allergic conditions leading to serious health issues. Having pursued Mechanical Engineering, and going to various industries on industrial corridors for in-plant training; I finally understood that I was also somewhere going to be a part of this in the future.

Moving forward to 2020; after having shifted to the periphery of Chennai with much-improved air; I feel much better now. But things are not looking good in Chennai.

Today morning I woke up to see the Air Quality Index Scale and found out to be one of the highest in the World with 175 AQI which is Unhealthy in every sense.

Bhogi is the beginning of the harvest festival of Pongal which is celebrated on the first day of Tamil month of Thai. The AQI in Chennai worsens every year on the Bhogi day owing to the lighting of the bonfire.

Hundreds were seen lighting bonfires contributing to the increase in carbon emissions. Residents even burnt old clothes and articles outside their houses!

At 11 am, the air Quality Index (AQI) was 170 enough to cause breathing discomfort to people with lung problems and asthma.  This is the second consecutive day when air pollution spiked under unfavorable weather conditions. Tamil Nadu Pollution Control Board (TNPCB) data showed a minimum AQI value of 155 (moderate) to maximum value 349 (very poor).

Chennai is nicknamed termed as the Detroit of India and Asia! No doubt, the presence of the vast number of automobile and allied companies; the pollution level and on-road coupled with the highly unsustainable and undeveloped and mad expansion of the city has made the air quality and city life quite dilapidated in the past decade.

Adding to that, climate change and rising sea levels have made every current citizen of Chennai, including me to rethink the permanent settlement here.

One of my neighbors from Korea who left their jobs in Hyundai started a Cafe here back in 2017 but soon packed their bags to leave back to their country mainly on account of bad health their children experienced during their stay.

I request every citizen of Chennai or expatriate to have a low lit Bhogi this time so as to lessen the impact of smog in the air.

I really wish our leaders see this and take urgent action before the companies which have led to the increased government revenue in the past start selling their stakes of land and move to other cities in India.