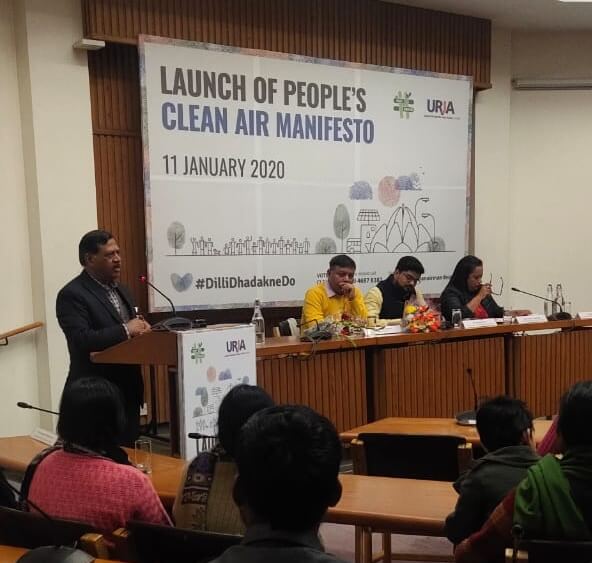 Delhi Citizen Groups Release Clean Air Public Manifesto 2020
As the National Capital, Delhi must set an example for the country, not lag behind with poor air quality and weak environmental policies, says the manifesto

Citizen groups in Delhi, My Right to Breathe and United residents Joint Action (URJA) released a Clean Air Public Manifesto ahead of the upcoming assembly elections. This manifesto was released at the India International Center, New Delhi on 11th January 2020.

Representatives of major political parties, including AAP, BJP, and Congress, together with the presidents of Resident Welfare Associations were present at the release.

New Delhi’s greatest challenge is air pollution and the deterioration of its citizens’ health. As the National Capital, Delhi must set an example for the country, not lag behind with poor air quality and weak environmental policies, says the manifesto.

According to the manifesto, these are the priority action points which needs to be taken up by the new Delhi government:

2. Pathway to 100% clean electricity for all

9. Delhi and neighbors tackling pollution together

Szarita Laitphlang, Spokesperson of Indian National Congress said, "I think that every citizen of Delhi has the right to breathe clean air. Not only for Congress, but it also has to be an agenda for every political party because the air that you breathe does not ask you to which party or religion you belong to."

"I think air pollution will be a major agenda in the upcoming elections. The present has not worked on this major issue. BJP will definitely work on environment and pollution and bring up the solutions in its manifesto", said Jayram Viplav, Spokesperson of BJP.

"We have reduced 25% pollution in Delhi. Air pollution is a very big issue and we all should address it together. Our CM has said that the prime agenda for the next five years for us would be ending air pollution." said Ghanendra Bhardwaj, Spokesperson of Aam Aadmi Party.

Few citizens, however, had other concerns on how the ban on various activities affects their income.

Vighnesh Jha who is the Principal Administrator at Federation of Rickshaw Pullers' Association pointed out that there is not even a single charging e-rickshaw station in Delhi and they need to be created.

"Citizens are working on the pollution issue but when it comes to resources, Government fails to provide them with it. They don't have tools, so let's see what the new government does," said Atul Goyal, President of URJA.

He added that the RWA's keep on doing things like rainwater harvesting etc on their level but government has to take major decisions to curb pollution at a bigger level.