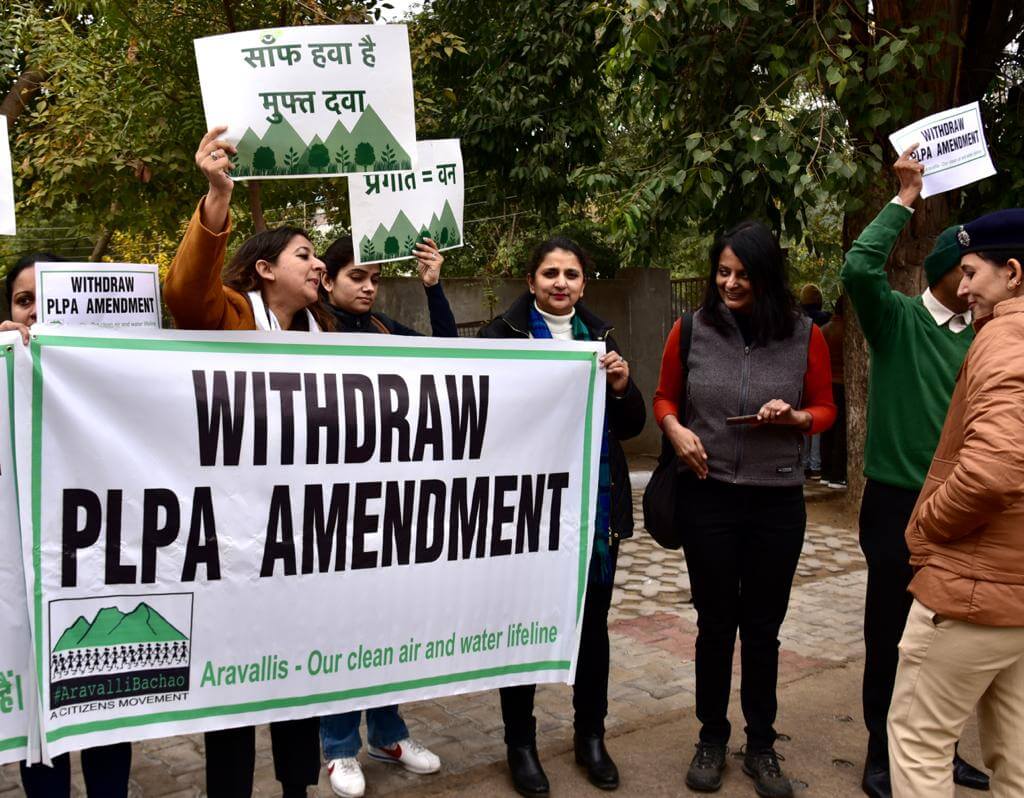 Residents Protest to Save the Aravallis in Gurugram
A group of concerned citizens of Gurugram came together for a silent protest in front of Town Hall in Civil Lines on Thursday, 9th January 2020 where Mr. Manohar Lal Khattar, the Chief Minister of Haryana was attending a grievance redressal meeting. Lowest forest cover in Haryana “We are here to convey to our Chief […]

A group of concerned citizens of Gurugram came together for a silent protest in front of Town Hall in Civil Lines on Thursday, 9th January 2020 where Mr. Manohar Lal Khattar, the Chief Minister of Haryana was attending a grievance redressal meeting.

“We are here to convey to our Chief Minister that we have elected this government to power to work for the welfare of all the citizens of Haryana. The Punjab Land Preservation Act (PLPA) Amendment Bill 2019 passed in the state assembly in February 2019 goes against the interests of the citizens and it needs to be withdrawn in the next assembly session,” said Dr. Sarika Verma, a concerned citizen of Gurugram.

The Haryana Governor has given his approval for the PLPA Amendment Bill despite the Supreme Court putting a stay on it. It seeks to open 33% of the forest cover in Haryana for real estate development. This has come as a big blow to the citizens.

Another citizen Vaishali Chandra Rana said, “Haryana government is currently in violation of the Supreme Court orders. Instead of demolishing the illegal constructions on PLPA protected Aravallis, the government is trying to legalize them by opening our forests for the builder mafia through this amendment bill.

Haryana already has the lowest forest cover in the state, a mere 3.59 percent.

“Aravallis are the lungs of the National Capital Region and natural barrier protecting us from the sand storms coming in from the Thar desert. If the Aravallis are destroyed, NCR cities will turn into a dust bowl and become completely unliveable’, said Anuradha Prasad Dhawan, local resident of Gurugram.

“Aravallis are critical for maintaining water security in NCR cities where extraction is 300% more than the recharge. High levels of cracks and fissures in the Aravalli hills make it a superior zone for recharging groundwater in the National Capital Region which is running dry”, said a local resident, Chandramouli Basu.

Prem Singh Tanwar and Rajbir Singh, residents of villages in the Gwal Pahadi area said, “A lot of illegal encroachments have come up on Aravalli forest areas and water bodies. How will the groundwater get recharged with all these illegal constructions destroying the johads which were traditionally made for rainwater harvesting and recharge? We have complained to the authorities but nothing has been done.”

“Aravalli forests cover less than 10% of Gurgaon and South Haryana and less than 2% of the entire state of Haryana. As citizens we demand that the regressive PLPA amendment bill is withdrawn and the entire Aravallis is protected under law so we can leave this natural heritage for our future generations,” said Neelam Ahluwalia, another concerned citizen.