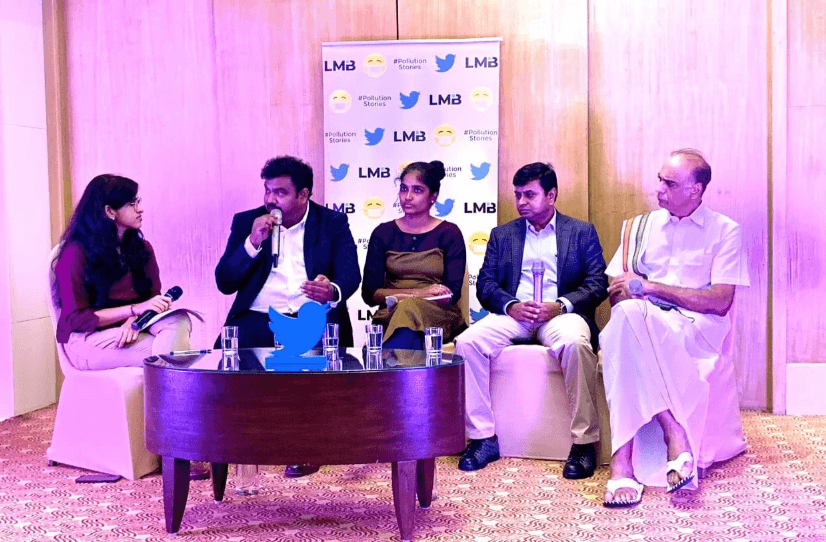 Chapter 6: City Session Chennai
City Sessions is a collaboration of a live show between Twitter India and Let Me breathe, where decision makers, experts and citizens come together to find short term and long term solutions to city level climate change, air pollution and other environment issues collectively.

Let Me Breathe hosted its sixth city session with Twitter India in Chennai on November 23, 2019, with the aim of finding collective solutions to all kinds of environmental issues in Chennai.

Previously held in Nagpur, Mumbai, Varanasi, Gangtok and New Delhi, the City Sessions are aimed at building a talking space between decision-makers and young people that are focused on climate change in a particular city.

The panelists interacted live with citizens on twitter to tackle some of the most unanswered questions online and also the new upcoming schemes of the Government to tackle pollution in Chennai.

According to Saravanan Annadurai, rainwater harvesting should be inculcated and awareness about it needs to go on the ground level.

While Raj Satyen talked about how the Chennai Government has been very cautious in managing the water resources in Chennai.

“200 water bodies in Chennai have been restored by the government and authorities,” he said.

We shouldn’t look at air pollution as just a weather phenomenon. Constant solutions need to be looked at for it.” said Vishvaja Sambath

Looking about the solutions, Satyen said that the Tamil Nadu Government was the first to provide an electric vehicle policy.

“Transition to renewable sources for power needs to be looked at and implemented as a decentralised issue.” said Vishvaja Sambath.

Americai V Narayanan said, “We should bring e-rickshaws to Chennai as an electric mobility solution for the city and transport problem.”

"From this City Session, we realised that collective action is crucial to solve any kind of climate issue. The participants discussed water, air and renewable energy issues and provided solutions to it. We aim to take this conversation forward in Chennai and on letmebreathe.in," said Tamseel Hussain, Founder of Let Me Breathe.

The next chapter of the city session takes place in Kolkata in December.

With City Sessions, we are trying to make the environment a mainstream topic. If you want city sessions in your state/city, let us know.