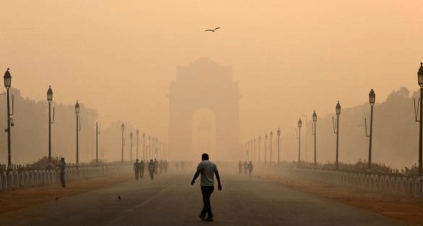 How Air Pollution Affects You: Steps To Protect Yourself From The Unhealthy Air
Here are some simple, effective tips for protecting you and your family from the dangers of air pollution

As pollution levels crossed the dangerous levels in Delhi-NCR, with nearly 44% of the city’s PM2.5 load coming from stubble burning emissions, the Supreme Court-appointed Environment Pollution (Prevention and Control) Authority declared a public health emergency in the region and banned construction activity till November 5.

Schools will also remain shut during the same period, the Delhi Government announced.

From respiratory disorders to effects on the reproductive cycle to even hiking chances of diabetes, air pollution has a head-to-toe negative effect on human health.

A 2018 report by the World Health Organisation (WHO) revealed that breathing in toxic air kills about 600,000 children every year under the age of 15 years. That is how many children died from lower respiratory infections caused by air pollution in 2016 alone.

Another 2017 report by the Centre for Science and Environment (CSE) found that 30 percent of all premature deaths in India are caused due to air pollution.

He added that there are two broad categories of air pollution - Particulate matter and Gaseous matter. They enter through the lungs and cause damage to them. They also get absorbed from the lungs and into the circulation from where they reach every organ of the body.

Here are some simple, effective tips for protecting you and your family from the dangers of air pollution:

1.Morning walk is a big No - Exercising while breathing toxic air is of no benefit and is rather harmful. The air pollution is said to be the highest in the morning. Shift outdoor activities to evening hours when pollution is slightly less.

2. Invest in anti-pollution masks- With such poor quality of air, it’s mandatory for everyone to use a mask when going outdoors. Using the right mask is important.

5. Make sure there is proper ventilation inside- How many of you know that indoor air pollution is as dangerous as outdoor air pollution? It can also be worse than outdoor pollution. It is very important to make sure that the air inside is recirculated properly. Put a chimney in the kitchen and an exhaust in the bathroom.

6. Watch what you eat- One should also be careful about the diet around this time. It is necessary to have enough immunity and nutrients to make the body strong enough to fight pollutants. Consume foods rich in vitamin C, omega 3 fatty acid and magnesium.

7. Ayurvedic Solutions- Apart from vitamins, certain herbs, and spices are also known to have antioxidant qualities. Turmeric is a well-known antioxidant. Mixing turmeric and ghee can relieve cough and aid during asthma. Jaggery mixed with onion juice is another useful medicine, useful during both wet and dry cough.

8. Hydrate your body enough- Keeping the body hydrated is a very important step to be taken care of. One could also consume vegetable juice and fruit juice.

9. Consult a doctor if symptoms persist- If you experience any symptoms like shortness of breath or hay fever or any other after exposure to an outdoor environment for a long time, consult a doctor and take medical advice as soon as possible.