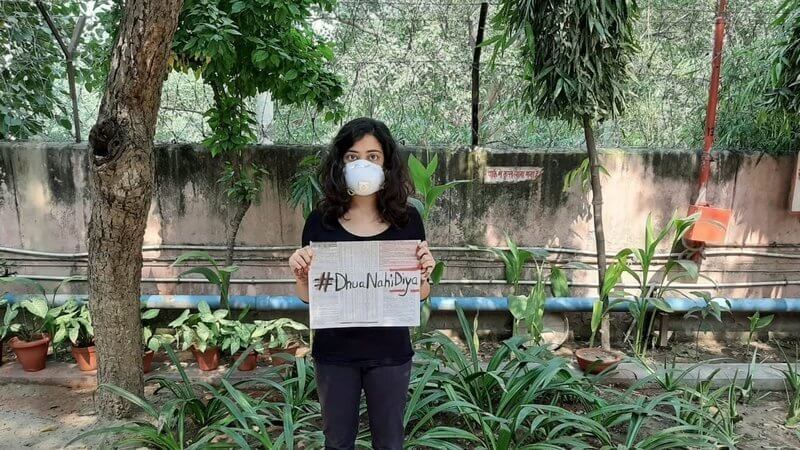 Why I Launched a Campaign Against Bursting of Firecrackers #DhuaNahiDiwali
Growing up, Dussehra used to mark the beginning of the time of festivities for me. The burning of the Ravan signified winter uniform in school, crack of autumn and, of course, the onset of three months of celebration. Air pollution on the rise However, the feeling was soon replaced by dread – dread for the […]

Growing up, Dussehra used to mark the beginning of the time of festivities for me. The burning of the Ravan signified winter uniform in school, crack of autumn and, of course, the onset of three months of celebration.

Air pollution on the rise

However, the feeling was soon replaced by dread – dread for the overnight increase in pollution, the severe coughing and wheezing and the likes of it, all of it multiplying several folds over the next three months.

It was around the year 2005 that I swore completely off crackers. This was also the time when most of the public schools in Delhi and NCR supported the #SayNoToCrackers Campaigns.

Little did our naive minds know that this small step that we had taken to ‘save’ the environment would be saffronised in the decades to come.

The following are the four points that I have raised in my petition:

I started this petition around Diwali time to make a small contribution to the mammoth task of controlling pollution.

While it is true that majority of pollution and smog in Delhi is due to crop burning in the neighbouring states, one cannot deny the role played by crackers. So it really surprised me when the petition was met by some resistance from staunch supporters of ‘freedom of religion’.

In the last few weeks, I have managed to gather substantial support for the petition. Over 8500 individuals have signed the petition. Comments for extending support range from wanting a pollution free environment for their children to grow in, to battling global warming collectively.

However, much to my surprise, there are quite a few people who have active engaged in whataboutery and given this entire campaign a religious colour.  While some have questioned why regulate burning of crackers only for Diwali, there are some who have openly declared that they will buy and burn more and more crackers!

Will your religion shield you from pollution?

My question to all those people is – when time comes, are you sure your religion will shield you from pollution? When you say that regulating bursting of crackers is an attack on your culture, are you endorsing that your religion openly promotes pollution?

Every fight is met with resistance.  Every battle sees hardships. Sometimes, however, we need to take a step back and see the bigger picture. When the enemy is pollution, we must join hands to fight it, in whatever way we can.

Regulation of firecrackers is the easiest step to curb air pollution

It is easy to say stop using private transport, ban plastic, but these things are easier said than done. We cannot possibly ban plastic overnight (think of your phones, your laptops, the shampoo bottles, the water bottles, the cold drinks – reduction in using of plastic will have to be gradual!), we cannot take only public transport at all occasions, but what we can do is regulate burning of crackers.

Here are a few ways in which you make can this Diwali a 'Happy Diwali' for you and for those around you:

In the end, all we are looking at is ‘mere, tumhare, sabke liye, #HappyDiwali’.

(Mishika is a lawyer practicing in Delhi and has been actively working in the field of gender based violence and environment degradation, two burning issues for Delhi NCR, for the past decade.)