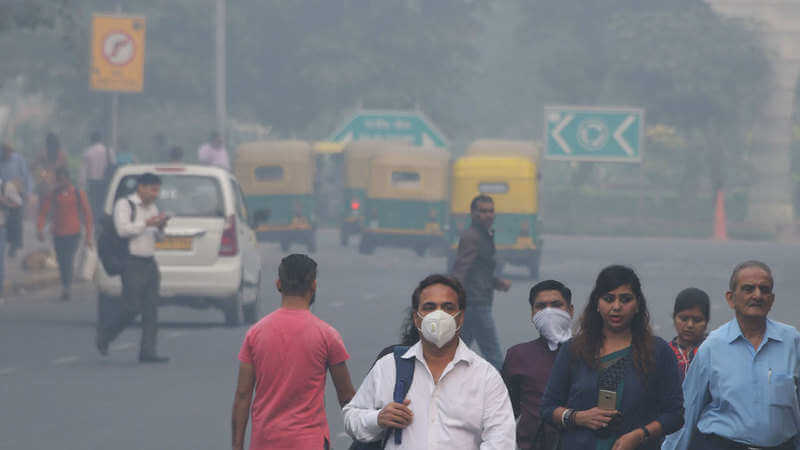 Delhi Air Pollution Makes a Comeback, Kejriwal Asks Citizens to Be Prepared
A layer of haze covered the national capital for the fourth day as air pollution makes its comeback. The air quality went from “poor” to “very poor” category with AQI crossing the 300 mark in most areas in Delhi and neighboring regions. AQI crossed the 300 mark The AQI in Anand Vihar, Wazirpur, Vivek Vihar, […]

A layer of haze covered the national capital for the fourth day as air pollution makes its comeback. The air quality went from “poor” to “very poor” category with AQI crossing the 300 mark in most areas in Delhi and neighboring regions.

Stubble burning in Punjab and Haryana has also contributed to the rise of air pollution and PM2.5 levels - atmospheric particulate matter with a diameter of fewer than 2.5 micrometers - with the concentration of the pollutant expected to rise to 6 percent.

"The fire counts in Punjab and Haryana have increased significantly over the last two days. The wind direction in Delhi is westerly which is unfavorable thereby carrying the smoke from the stubble burning towards Delhi," LS Kurinji, a research analyst with the Council on Energy, Environment and Water (CEEW), was quoted by news agency IANS.

"Delhi will probably encounter poor air quality in the coming days due to the prevailing wind direction and the stubble burning," she added.

The latest images from US space agency, NASA show quite a few numbers of fire incidents occurring in the North-western region of India and adjoining regions in Pakistan. They are likely due to crop burning in the area and will bring pollution to different parts of India, including Delhi-NCR.

Kejriwal asks Delhi to be prepared

Delhi Chief Minister Arvind Kejriwal has issued a statement warning the people of the national capital and adjoining areas to be prepared for the upcoming months.

He added that the smoke from crop stubble burning in neighboring states has started reaching Delhi and our air quality has started deteriorating from Good to Moderate to Poor to Very Poor.

"This is not just a question of the air quality in Delhi. Perhaps the largest health impacts of the stubble burning will be faced by the residents of Karnal and other parts of Haryana. Delhi gets the most attention because it has more media, it has the Central Government," Kejriwal added.

"People with heart or kind diseases and children should avoid longer and heavy exertion. Everyone may experience health effects. Significant increase in respiratory problems," it said in a statement.