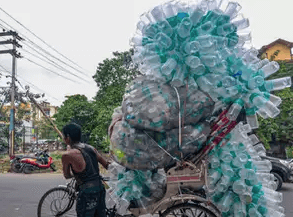 The Real Reason Behind Plastic Pollution!
Plastic cups/bags, the biggest environmental polluters Writing about the plastic ban, look at the things which are getting worse. It’s the basic stuff and we are talking about single-use plastic here. Plastic straws or plastic cups, plastic bags are the biggest polluters and one of the most unnecessary things which we have been using for […]

Writing about the plastic ban, look at the things which are getting worse. It's the basic stuff and we are talking about single-use plastic here. Plastic straws or plastic cups, plastic bags are the biggest polluters and one of the most unnecessary things which we have been using for the last three to four decades!

I don't think the plastic ban might reduce the burden on landfills and how it would create any difference because if we are not segregating waste, then, even the plastic ban is of no use. Most of the things which people buy come in single-use plastic, be it flowers, grocery or any other stuff. I think till the time we don't change the system, it would not create much of a difference.

Banning single-use plastic is advocating change on a very superficial level. If you see, plastic bans have happened a lot of times and then what happens? Things go back to the same thing. Single-use plastics were banned previously in Mumbai. But the situation was still back to the same because the major question always remains how it's going to be implemented and what results will be visible.

Segregation of waste: The most important step

Even if the plastics get banned, there's not going to be a major change till the time, segregation becomes the most important aspect. Till, the time you are not segregating waste, you CANNOT manage waste. The basic first step is to segregate waste, which no one does in India.

Basically, everyone is just putting all the waste together in one bin and giving it to the ragpicker and it's going to the landfills, getting out in the air and releasing toxic gases. So, the situation, even after the ban will more or less be the same.

The Economic Structure is the root cause

Also, it won’t really affect the climate situation which we are facing right now because trash is still going to be there. Plastics are being eradicated on a very superficial level. We are not talking about the whole economic structure, which is based on this: to create toxins and to dump the toxins because it's a linear system, not a circular system.

If we really wanted real change, we have to shift to the circular economy pattern because if you look at every business right now existing in the world, it's gaining profits by destroying the planet and exploiting resources and then dumping those resources, all in the name of profits. They don’t create things which last for long because if they will, companies won't work. That's why I think that's plastic straws exist or not metal straws!

When we live in such a hazardous or wasteful system, which is designed by the economy, climate change cannot be eradicated. Nothing can be done about it. It's the system! No matter how you try to go zero waste or try to reduce your waste, you will end up creating some.

When a business is created, it's always profit over the planet and they will plan it over a profit. Until the time, we don’t think holistically and focus only on money, it's going to be as bad as it is today!