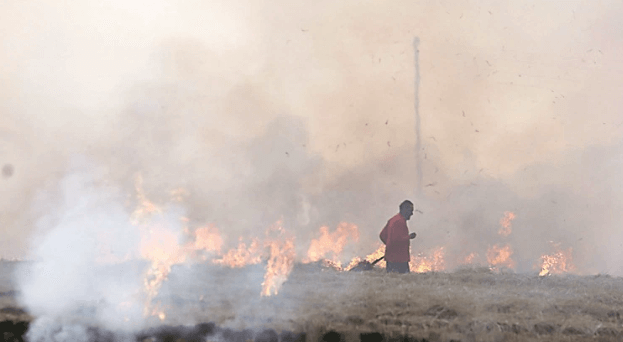 It’s that time of the year again when if you’re in Delhi your eyes burn, throat itches and even breathing becomes laborious. Often blamed for this are the farmers of Punjab who burn the stubble left in the ground after they harvest their paddy. They, however, are doing all they can to ensure stubble burning […]

It’s that time of the year again when if you’re in Delhi your eyes burn, throat itches and even breathing becomes laborious. Often blamed for this are the farmers of Punjab who burn the stubble left in the ground after they harvest their paddy. They, however, are doing all they can to ensure stubble burning does not take place. But it’s a lonely battle for C. S. Grewal, a farmer in Punjab. He spoke to Siya Bhatia from Let Me Breathe:

How does stubble burning affect you?

I am a farmer and I’m also an asthmatic. I am affected by the problem from both sides. On one side, I have a very short window of time to harvest my paddy and plant the next crop, which is wheat. And, there really is no economical and viable, cost-effective solution, which I can implement to remove my paddy stubble.

Now there’s mechanization, but machines just cut the paddy from the top where the grains are, and they leave the rest of the plant in the ground, which is what really causes the problem.

How we are using our paddy stubble?

Earlier, when people used to cut the paddy by hand, they used to cut the whole plant from the ground right next to it. Then, they had to hold the plant and they had to beat it against a drum. This process is called ‘Threshing’ and is used to get the grain out.

So, if you’re doing it in by hand, then you have to cut it from the ground. In that case, once the seed is out, you have the entire plant left. We use it for the plant as mulch. We use it for Manure Composting. So, that is basically how we are using our paddy stubble.

I have to free my land for the next round of seeding and have a very short window for that. So the time I spend on becomes an opportunity cost.

Is the Government doing anything?

The government has taken several steps to assist in managing the stubble. But, all of those solutions place a financial burden on the farmers, having to go out and buy machinery which he doesn’t own.

So, according to me, there is no proper solution in which the government has come out to favor of the farmer. For example, in the case of the happy seeder, it requires a tractor of at least 45 horsepower. And most of the farmers have smaller tractors. So, they need to upgrade their tractors.

Secondly, these machines are required for only a few days, every year. So, the farmer is not able to make an investment in a machine which he has to use only for two to three days. So, in case all these solutions that are being provided, money is flowing out of the farmer’s market. That’s why the steps have not been successful and the problem persists.

Stubble burning is not the only reason for pollution

The other thing people should realize that it is only for a few short days that a farmer burns its stubble in a year. And then for the rest of the year, he’s actually putting back oxygen in the air. We all know every plant takes in carbon dioxide and gives out oxygen.

So, all our crops are putting back oxygen in the air. Why is this not taken into the equation? Clearly, the amount of oxygen our crops have put in the air around the year is actually more than the pollution caused by stubble burning.

Be sensitive to a farmer’s struggle

There is no sensitivity being shown towards the problems of farmers. There is a huge burden of expectations on the farmer as if he’s some kind of a magician who will solve everybody’s problems, which is not right.

If that community does not support him, understand his struggles, then what is the purpose of his existence.