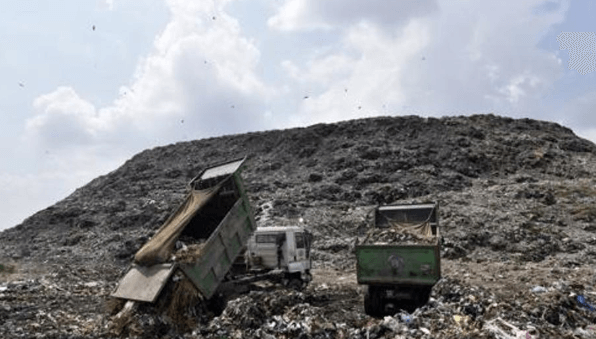 Mount Everest Of Trash Is The Latest Tourist Attraction In New Delhi
New Delhi’s Ghazipur landfill which currently stands 213 feet tall, has grown at an alarming rate since it opened in 1984 and reached capacity in 2002. The pile is so dangerously large that India’s Supreme Court has said warning lights need to be added for aircraft visibility. The rubbish mountain is in fact on course […]

New Delhi's Ghazipur landfill which currently stands 213 feet tall, has grown at an alarming rate since it opened in 1984 and reached capacity in 2002. The pile is so dangerously large that India's Supreme Court has said warning lights need to be added for aircraft visibility. The rubbish mountain is in fact on course to rise higher than the Taj Mahal by 2020, becoming a fetid symbol for what the UN considers the world's most polluted capital.

According to the Press Information Bureau, India generates 62 million tonnes of waste (mixed waste containing both recyclable and non-recyclable waste) every year, with an average annual growth rate of 4%.

The overflowing Ghazipur landfill impacts lives of more than 30 lakh people living within 10 km area of the landfill and the nearest residential settlement is just 200 metres away. The landfill is polluting the local air, groundwater, and poses a serious threat to Sanjay Lake, which is around 2.5 km away and the already dying Yamuna River, which is around 7 km away.The landfill grows at the rate of approximately 33 feet every year. Also, the hazards and threats that the Ghazipur site poses can’t be ignored.

In 2018, a section of the garbage hill collapsed in the heavy rains, killing two people. Fire outbreaks on the rubbish mountain is a common site. Also, It is a regular sight for residents around the yard to spot fire outbreaks which days days to go off, covering the entire area in a blanket of smoke. Shambhavi Shukla, senior researcher at the Center for Science and Environment in New Delhi, said methane belching from the garbage can become even more deadly when mixed with atmosphere.A recent study said the dump was a health risk for people living within five kilometres, including for cancer. Leachate, a black toxic liquid, oozes from the dump into a local canal.

Ghazipur isn't the only mountain of garbage that New Delhi has to deal with. New Delhi's other dumps are no less as with nearly 80 billion pounds of trash spread across four official dumping sites, India is facing a waste crisis that is killing its citizens and worsening air and water quality. It's not uncommon for doctors to see multiple patients a day, many of whom are infants and children for respiratory and stomach problems caused by the polluted air and contaminated water. According to Science Alert, "it's estimated that Delhi saw 981 deaths from acute respiratory infection," from 2013 to 2017.

Pluc Creator, Pallavi Pant visited one of the landfills in New Delhi, telling us how dangerous they have become for everyone and also breaks down the pollution cloud.

India does not have strong laws on waste segregation and recycling. It’s too far for Gazipur now. India needs to make laws so that no more landfills like Gazipur exist in India.