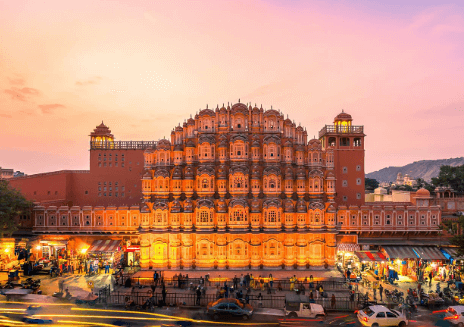 Jaipur is a major hub of commercial, crafts and tourism activities and is also a gateway to other cities in the state of Rajasthan. Lately the city has witnessed rampant construction and its IT sector has also been growing exponentially. With a population of over 40 lakh Jaipur has over 20 lakh vehicles, which is […]

Jaipur is a major hub of commercial, crafts and tourism activities and is also a gateway to other cities in the state of Rajasthan. Lately the city has witnessed rampant construction and its IT sector has also been growing exponentially. With a population of over 40 lakh Jaipur has over 20 lakh vehicles, which is  a higher vehicular density than even New Delhi, with a majority of the road space taken up by parking. In 2018, Jaipur ranked 30th out of 111 Indian cities in the Ease of Living Index. While the people of Jaipur are cognisant of environmental degradation it has still not become a political issue or poll agenda mainly  because other issues have taken primacy. Jaipur has been included in various prestigious national schemes such as Smart Cities, NCAP, and AMRUT that is expected to enhance the urban quality of life.

Featuring in the non-attainment cities list of the NCAP, Jaipur has PM10 and PM2.5 pollutants above the nationally approved safe limits. In 2018, as reported by Rajasthan State Pollution Control Board (RSPCB) – the air quality has degraded to critical levels in the city. The Comptroller and Auditor General of India (CAG) audit in 2018 observed that RSPCB failed to initiate any effective program to address air pollution in the state. A report by the British medical journal Lancet t found that Rajasthan had the highest death rate in the country due to air pollution thus reducing life expectancy by 2.5 years.

Jaipur as an NCAP city has 3 continuous monitoring stations (CAMS) which reports on data for all types of pollutants, and it has 11 and 6 manual stations reporting data on PM10, SO2 and NO2. Sources of air pollution include vehicular emissions (cars, auto-rickshaws, old trucks & buses), construction, road dust, rampant mining, sand storms, Brick kilns, Industrial emissions and diesel generator sets, garbage (household, street & biomedical) and leaves burning, the burning of wood as fuel and deforestation, crop stubble burning and a lack of green spaces. The Rajasthan pollution control board’s chief environment engineer and officer in-charge (planning) AK Puri said, “The main reasons of pollution in Jaipur were emission from vehicles, burning of solid waste in open, climatic conditions (dust in air), use of unclean domestic fuel and lack of adequate green spaces.”

“There was a lack of coordination between the RSPCB and other relevant departments which led to non-identification of sources of air pollution along with their quantification through source apportionment studies.. In the absence of which, the RSPCB was not in a position to prepare comprehensive programmes for prevention, control or abatement of air pollution,” the CAG report on the last fiscal tabled in the Rajasthan state Assembly in February 2018 said.

A study titled ‘Global Burden of Disease Study 2017’ by Lancet revealed that air pollution is now the second largest cause of premature deaths in India after cardio-vascular diseases. In the 1990s, air pollution was the third largest cause of such deaths in India. Rajasthan is leading the country with the burden of COPD and asthma induced deaths which in turn is linked to air pollution in more than half the cases followed by smoking for a quarter of the cases. According to the Annual Health Survey 2012-13, 32.99 per cent of the children in Jaipur suffered from acute respiratory infection (ARI) which has been on the rise. Overall, in Jaipur, there has been an increase in Rhinitis, asthma, bronchitis, pneumonia, COPD, Chronic cough, sneezing, itching, eye problems ARI and other respiratory issues.

Actions and Policies taken by the Rajasthan State Government

The government of Rajasthan banned the registration of all kinds of E-rickshaws due to a large number of them (4,000) already running without training or driving licenses, leading to an increase in accidents. The Department of Transport has also ordered that the E-rickshaw dealers will have to submit an affidavit with a declaration that it will conduct a compulsary10-day drivers training programme for E-rickshaw drivers. “These e-rickshaws have become very popular in various parts of the city since they are slow moving, cost effective and are non-polluting with ease of availability,” said Gajanan Sharma, a regular commuter.

Former Rajasthan  Chief Minister Vasundhara Raje launched RajVayu, a mobile app, on the occasion of World Environment Day to provide air pollution-related details such as the level of pollutants to citizens. CM Raje also launched Drishti, another mobile app that would monitor the air quality in industrial areas. It was announced that 16,000 saplings would be planted under the Dravyawati River rejuvenation project.

The government of Rajasthan released a new solar policy, aimed at developing 25,000 MW of solar energy in order for the state to attain self-sufficiency. Rajasthan Solar Policy 2014 would act as an extension to the Jawaharlal Nehru National Solar Mission (JNNSM) and the Rajasthan Solar Energy Policy, 2011 and will remain in force until dismantled.