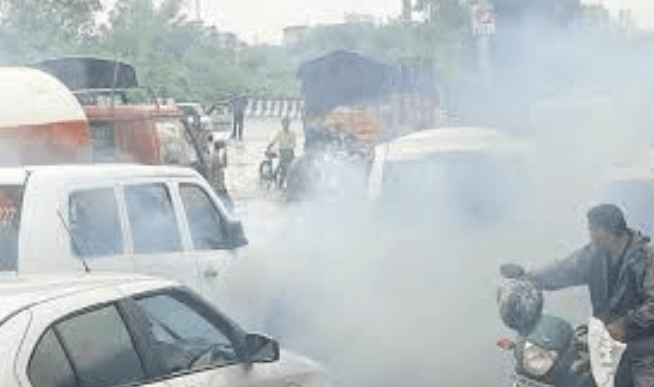 Muzaffarpur, A City On The Rise, Must First Tackle Air Pollution

Muzaffarpur is the largest town in northern Bihar and is the fourth most populous city in the state. The district is a major producer of agriculture and horticulture products such as leech , mangoes, roses, marigold and jasmine. Other industries include tobacco, railway engineering, leather and dairy besides a booming wholesale cloth trading business. The city […]

Muzaffarpur is the largest town in northern Bihar and is the fourth most populous city in the state. The district is a major producer of agriculture and horticulture products such as leech , mangoes, roses, marigold and jasmine. Other industries include tobacco, railway engineering, leather and dairy besides a booming wholesale cloth trading business. The city also has another claim to fame – Muzaffarpur ranked 9th in a list of the top 15 most polluted cities in India released by the World Health Organisation in 2018. The city, which features in the NCAP list of non-attainment cities on air pollution, had bad quality air on more than 50 per cent of the days in 2017, and reached the ‘severe’ category in the Central Pollution Control Board’s Air Quality Index on multiple occasions in 2018.

Studies have identified PM2.5 and PM10, which come from multiple sources, as the main air pollutants. NO2 has also been observed at alarming levels which is linked to vehicular emissions from old vehicles and traffic congestion in the city. Muzaffarpur, as an NCAP city, has 1 continuous monitoring station (CAMS) reporting data for all types of pollutants  and 1 manual station reporting data on PM2.5, PM10, SO2and NO2. The Bihar State Pollution Control Board (BSPCB) has identified the need for at least 12 CAMS for efficient and comprehensive reporting.

Muzaffarpur is a city on the rise which hopes to benefit from the Smart City and AMRUT schemes launched by the central government. Muzaffarpur bagged the 79th spot out of 100 smart cities evaluated on the implementation status of the scheme and was ranked 387 out of 425 cities in the national cleanliness survey Swachh Sarvekshan 2019 while it was ranked 25th in the Mukhya Mantri Saat Nischay (The Chief Minister’s Seven Decisions) Scheme for 38 districts in Bihar. More recently in 2018, it ranked 63th out of 111 Indian cities in the Ease of Living Index.

But much will depend on what measures the local administration will take to tackle air pollution and make the city more liveable. “Preventive measures are being taken to improve the air quality. We are highly concerned over the poor air quality in the town. We will leave no stone unturned to keep the air cleaner and healthier for every human being. We are working on the issue with officials from Bihar State Pollution Control Board (BSPCB) and Muzaffarpur Municipal Corporation. Some of the reasons for this pollution have been identified,” said Md Sohail, the District Magistrate of Muzaffarpur.

Whether the situation on ground improves in the near future or not, what cannot be denied is the long-lasting impact of air pollution on health. In a study titled ‘Global Burden of Disease Study 2017’ by the British medical journal Lancet revealed that over 33 per cent of deaths in Bihar in 2016 (the national figure nearly 27 per cent) occurred because of pollution-related diseases. Air pollution is now the second largest cause of pre-mature deaths in Bihar after cardio-vascular diseases. In the 1990s, air pollution was the third largest cause of such deaths in India. In Muzaffarpur, there has been a noticeable increase in the number of reported cases of asthma, lung cancer, cardiovascular disease, hypertension and stroke. Respiratory issues such as bronchitis, viral cough, pneumonia are on the rise as are cases of skin allergies, headache, fever, eye issues, skin problems and stomach issues.

The State Pollution Control Board says it has an action plan to tackle identified causes of pollution. Some of the actions taken and policies introduced by the Bihar Government include:

2018:  Sushil Kumar Modi, Deputy CM of Bihar, who also holds the forest and environment portfolio, said brick kilns which do not have ‘zig-zag technology’ will be banned from September 1, 2018. The technology reduces coal consumption by 2 tonnes per one lakh bricks made. BSPCB estimates 80 per cent of brick kilns have adopted this technology, which has lower levels of emission. “Zigzag design for brick kilns has been used since the 1970s and is a well-tested technology. In West Bengal, for instance, 2,500-3,000 brick kiln owners have been using it for years without waiting for any government order,” says Sameer Maithel, director of Green-tech Knowledge Solutions, a clean energy research and advisory firm based in Delhi. “Bihar too has been trying to make its kilns shift to zigzag technology since 2016. As per the last order passed by the state government on August 30, 2018, all kilns must shift to the cleaner technology by August 31, 2019. Of about 6,500 brick kilns in the state, 450-500 have converted to zigzag technology so far. But despite the cost and labour issues, most kiln owners are keen to shift to zigzag. According to our survey conducted around Patna, about 65 per cent of those who made the transition found that the zigzag technology was more fuel efficient and produced better bricks,” Maithel added.

The Deputy CM also sought that changes be made in rules and regulations which concerned permissions to set up captive biomedical waste plants by big hospitals and medical colleges. He also pushed for states to be given the power to ban motor vehicles older than 15 years. The Bihar government has announced that it is coming up with an “Electric Vehicles policy” to promote the manufacturing and use of such automobiles in the state.

2017: The Bihar government announced a new policy for 3400MW power from renewable/non-fossil fuel sources by 2022.

2015: The Bihar government released an action plan for climate change that involved major changes in its transport and energy systems in order to reduce emissions that will benefit the air quality in the state.