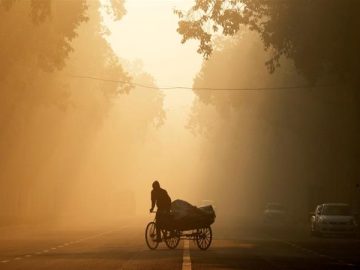 Patna was ranked the 5th fastest growing city in India in a 2018 survey by the City Mayors Foundation, and can boast of being the political power centre of Bihar but when it comes to quality of life Patna’s air has left its citizens simply breathless.   In an Annual Survey of India’s City Systems (ASICS) […]

Patna was ranked the 5th fastest growing city in India in a 2018 survey by the City Mayors Foundation, and can boast of being the political power centre of Bihar but when it comes to quality of life Patna’s air has left its citizens simply breathless.

In an Annual Survey of India’s City Systems (ASICS) by Janaagraha, a Bengaluru-based NGO, that evaluates urban governance which influences the quality of life in Indian cities, Patna was ranked 20th out of 23 cities in 2017.

The air quality of Patna has deteriorated rapidly over the past few years. In 2013, the World Health Organisation (WHO) classified Patna’s outdoor air pollution as carcinogenic. The city occupied the 48th position among 1,600 cities in the WHO’s database on urban outdoor air pollution released in 2014. Two years on it reached the 6th position in the world before becoming the 5th most polluted city in 2018. In February 2019 a study by IIT-Kanpur and Shakti Foundation placed Patna ahead of Kanpur, Varanasi and Delhi on PM2.5 levels during October-November 2018. Data available with the Central Pollution Control Board (CPCB) for Patna in 2018 shows that 48 per cent of the days in the year had either “moderate” or “satisfactory” air quality, while the remaining 52 per cent saw a “poor” or “severe” quality of air. Patna had no day in the year with ‘good’ air quality.

Featuring in the non-attainment cities list of the National Clean Air Programme, (NCAP) Patna clocked an Air Quality Index (AQI) of 423 for the dangerous PM2.5 pollutant just behind an AQI of 445 in Muzaffarpur in November 2018. As per the guidelines of CPCB, an AQI above 400 is categorized as ‘severe’ which means it can affect healthy citizens and seriously impact those with existing diseases.

Some of the factors which have contributed to this deterioration of air quality in Patna include, vehicular traffic (cars, auto-rickshaws, old trucks and buses), construction, stone quarrying and road dust, brick kilns and diesel generator sets, wood burning for fuel and domestic needs, garbage burning by municipal workers and residents, industries and crop stubble burning. As per findings based on data from the real-time air quality monitoring station in Patna, the city in the month of December witnessed the worst air when 51 per cent of days had air quality in listed in the “severe” category.

An AQI bulletin issued by the CPCB reported that Patna was the most polluted city in India in December 2018. According to the health index of the government of India, a prolonged exposure to this level of pollution is hazardous, even for healthy citizens. Research by the India State-Level Disease Burden Initiative published in The Lancet Planetary Health estimated that over 96,000 deaths in Bihar could be attributed to air pollution in 2017. In Patna, there has been a noticeable increase in tonsillitis, allergic pharyngitis, bronchitis, chronic cough, burning sensation in throat, breathlessness, asthma, chronic respiratory and cardiovascular issues, sneezing, itching, eye problems and various other allergies.

In the meanwhile, the Bihar State government has started various initiatives to combat the issue.

2019: Bihar Deputy Chief Minister and Environment Minister Sushil Kumar Modi informed the state legislative council in reply to question from RJD member Ramchandra Purve and CPI MLC Kedarnath Pandey that a work plan had been prepared for improving air quality is the state capital and aimed to make it pollution-free by taking into account various sources of pollution.

GAIL has been making arrangements for setting up 5 CNG stations in Patna by June 2019, 200 new pollution check centres will be set up, road flanks were being painted to deal with the problem of dust particles on roads, while the Patna Municipal Corporation is cleaning roads with sweeping machines, he added.

2018: Sushil Kumar Modi, Deputy CM of Bihar, who also holds the forest and environment portfolio, said brick kilns which do not have ‘zig-zag technology’ will be banned from September 1, 2018. The technology reduces coal consumption by 2 tonne per one lakh bricks made. BSPCB estimates 80 per cent of brick kilns have adopted this technology, which has lower levels of emissions. Patna has 300 kilns in its urban air-shed.

2017: The Bihar government announced a new policy for 3400MW power from renewable/non-fossil fuel sources by 2022.

2015: The Bihar government released an action plan for climate change that involves transition in transport and energy systems to reduce emissions that will benefit the air quality as well.

At the national level the Central government has taken action and put policies in place in a bid to improve the situation.

2019: In collaboration with the Bihar Chief Minister, Prime Minister Modi announced the Patna Metro Rail project, CNG and LPG supply projects as well as the electrification of railway lines.

The National Auto Policy is released which includes EV, CNG, biofuels and hydrogen vehicles, though without timelines and no link with EV 2030 vision, FAME II or Make in India. Under the FAME II India scheme around Rs. 5,500 crore over a five year period has been set aside to provide grants for all kinds of electric vehicles

2017: The Railways Ministry announced new reforms and services such as Roll On Roll Off and long-term contracts to enhance freight traffic and reduce dependence on commercial vehicles.

2016: The Government of India announced the advancement of vehicular emissions and fuel quality norms to BS-VI levels by the year 2020 across the country.

All non-attainment cities were given a set of 42 action points to improve air quality and as a follow-up, 94 cities were asked to prepare detailed action plans. The states concerned had been urged to steer implementation of action plans in these cities. The CPCB has also launch a mobile app – SAMEER – for grievance redressal.

2015: The Government of India announced the FAME scheme under NEMMP to promote electric vehicles. EV manufacturers and sellers were expecting a policy and regulatory framework which would lay out a road map to create an ecosystem comprising, most importantly, of charging stations, as well as rolling out incentives for both the manufacture and purchase of EVs.