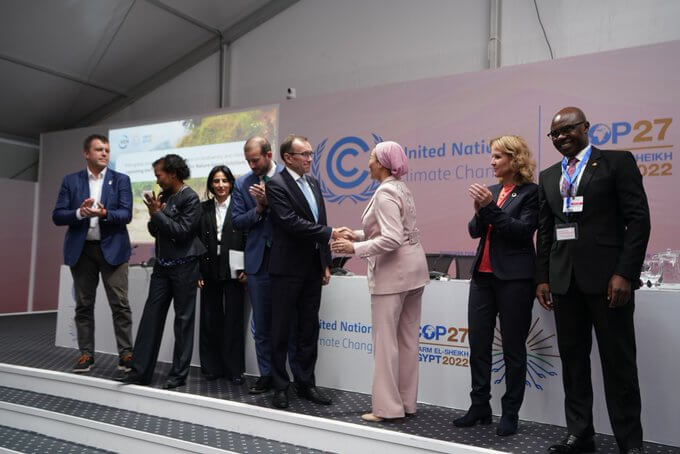 The COP27 Presidency connected climate and biodiversity on Wednesday, marking the opening of Biodiversity Day at COP27. The day kicked off with a high-level opening on “Connecting Climate and Biodiversity” that set the agenda to address the urgent need for integrated responses at scale. The day also saw the launch of the ENACT initiative for nature-based solutions, along with Germany and the International Union for Conservation of Nature (IUCN)

Over the course of the day, three pillars – Present, Hope and Vision – set the context for the nexus between biodiversity and climate change, shared solutions, and defined pathways to scale up action that addresses biodiversity loss and climate action. Speakers throughout the day include government ministers and representatives from international institutions, NGOs, environmentalists, and civil society.

Commenting on Biodiversity Day, COP27 President HE Sameh Shoukry said: “Biodiversity on our planet is at the heart of people’s economic, social, and cultural wellbeing, but climate change is accelerating biodiversity loss around the globe. The rapid destruction of ecosystems is increasing our vulnerability to the impact of climate change. We cannot address biodiversity loss without ramping up our implementation of climate solutions. They are not mutually exclusive. Through initiatives such as ENACT, the Egyptian COP27 Presidency will champion the integration of well-coordinated nature-based solutions on a global scale that are as urgent as our response to climate change.”

The ENACT initiative aims to enhance the protection from and resilience to climate impacts of at least 1 billion vulnerable people, including at least 500 million women and girls.Secure up to 2.4 billion hectares of healthy natural and sustainable agricultural ecosystems, through protection of 45 million ha, sustainable management of 2 billion ha, and restoration of 350 million  It also looks at significantly increasing global mitigation efforts through protecting, conserving, and restoring carbon-rich terrestrial, freshwater, and marine ecosystems.

A session on ‘The Biodiversity and Climate Change Nexus’ brought together ministers and scientists to discuss the role of conservation, restoration and management of ecosystems in conserving carbon stocks and sequestering carbon. The panel also presented the socioeconomic costs on biodiversity and the nature-based solutions to address climate change and sustain biodiversity.

Coral reefs also came under the spotlight as they are home to the highest biodiversity of any ecosystem globally and directly support over 500 million people worldwide, mostly in poor countries. Among the most threatened ecosystems, the only chance for their survival is limiting global average temperature to well below 2C above pre-industrial levels.

With COP27 taking place at Sharm El Sheikh, coral reefs take on a special significance. The Red Sea’s corals are amongst the last surviving reefs in the 21st century and the Red Sea Initiative launched by the Egyptian government in partnership with the United States, through USAID, UNDP, and the Global Fund for Coral Reefs last week, is an example of preserving precious biodiversity and ecosystems.

Session on ‘Hope for Coral Reefs’ saw discussions on the effects of climate change on the coral reefs of our oceans globally, particularly in Egypt's Red Sea along with the work being done to make the difference through science and innovation. The session also looked at the value of conserving the cornucopia of marine life.

A session on ‘Scaling up Urgent Action to Address the Biodiversity and Climate Crises’ looked at how private sector and governments can address the urgency and scale of implementation needed to secure biodiversity. Panellists discussed the essential need to deploy innovative approaches and financing mechanisms, as well as highlighting the significance of Public-Private Partnerships (PPP) towards the conservation and restoration of biodiversity.