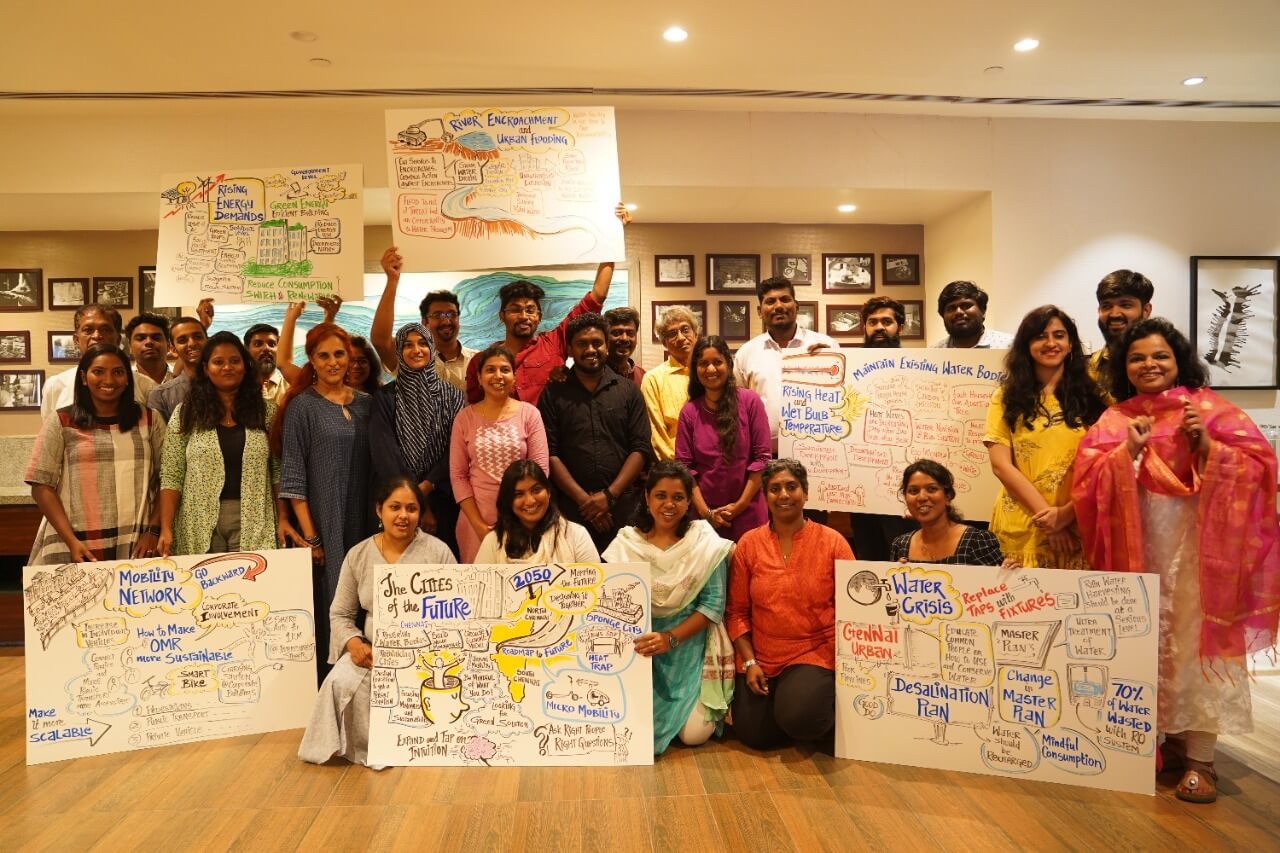 Chennai climate enthusiasts converge for a sustainable city by 2050
2
Some of the participants had travelled for two hours to reach the destination. Some of the mentors prepared several hours in advance for the brainstorming sessions. Neither the heat nor the distance deterred climate enthusiasts from Chennai who gathered together for a day-long design jam “City Sessions: The Future’ where how to build a sustainable […]

Some of the participants had travelled for two hours to reach the destination. Some of the mentors prepared several hours in advance for the brainstorming sessions. Neither the heat nor the distance deterred climate enthusiasts from Chennai who gathered together for a day-long design jam “City Sessions: The Future’ where how to build a sustainable Chennai by 2050 was deliberated upon. “It was a great platform to ideate with over two dozen strangers who share a similar passion for the upkeep of the environment. We need to have more such events,” echoed several voices.

The event was organised by LetMeBreathe, a global storytelling platform on climate change, pollution and sustainability in partnership with Climate Trends, a capacity-building initiative on environment conversations. The Chennai edition, held on October 15, gathered individuals from different sectors– energy startups to social work, environmental engineering to urban planning– under one roof, to build a sustainable city.

The team concerned with the rising temperature and wet bulb temperatures dwelled on the seriousness of adverse effects of the rising temperature. Their solutions involved having each housing society adopting a few trees, providing water kiosks at bus stops and also building eco-friendly colour-coded buildings in green, blue and white. Their mentor NK Sudheendra, director of Madras Terrace Architectural Works concluded that city development cannot overlook sustainable development and the need is for changes being incorporated at all levels from government to individuals.

Each team with a designated mentor worked on problem statements, decoding issues that led to the problem and what were the best solutions that can be built upon. For the team which worked on rising energy demands, led by Anupama Mohanram, co-founder and head-architecture, Green Evolution, the focus area of solution was built around three verticals— individual, community and policy level. At the individual level the suggestions moved from reducing energy consumption to planting green roofs, at community level solar energy was suggested while in terms of policy changes the team suggested incentives and subsidies to boost efficient consumption of energy.

The group which was working on urban mobility looked at ways to decrease private transportation and boost public transport infrastructure. The mentor for the team, Aishwarya Soni, Deputy Manager- Strategic & Visual Communications, ITDP India, led her team to put together solutions ranging from shared e-rickshaws to building a corridor for bicycles. Their solution also involved corporates in the stretch, who could take the onus of providing charging stations to boost electric vehicles' adoption. Tree lined streets to boost the network and higher tax rates or parking fees for private vehicles were other points mooted upon.

The event ‘City Sessions: The Future’ will now head to Mumbai and is slated for October 29. The Delhi edition was held on October 1.