The death toll from the catastrophic flooding in Pakistan has crossed 1,400.

About a third of Pakistan is submerged by melting glaciers and record monsoon rains that began in June. According to Pakistan’s National Disaster Management Authority, the flood affected over 33 million people with close to a million rendering homeless.

The latest statistics in a report show that over 1,600 have been injured, 3,25,000 homes destroyed, 7,35,000 livestock lost and 2 million acres of crops damaged — numbers which are likely to increase.

With a world getting measurably closer to 1.5°C  of warming, there is mounting evidence that climate change has affected these record floods.

In April, Pakistan also experienced a different extreme: record-breaking heat, with temperatures reaching over 40 degrees Celsius. On one day, the country recorded one of the highest ever temperatures – 49 degrees Celsius. The monsoon rains have lasted for twice as long as normal, and are predicted to continue until mid-September.

Extreme weather events are happening more frequently all over the world, putting more and more people in danger.

On September 6, India’s IT capital, Bengaluru, experienced traffic bottlenecks, power outages and flooded houses as a result of additional rain during an unusually heavy monsoon season. Every year, in the months of September and October, Bengaluru is extremely susceptible to flooding.

According to the National Emergency Response Centre, as of August 3, the death toll in India reached over 1,354 due to landslides and flash floods. The worst affected states have been Himachal Pradesh, Assam, Madhya Pradesh, Gujarat, and Maharashtra.

Up Next
VIDEO
Building affordable clean cooking solutions for Uganda 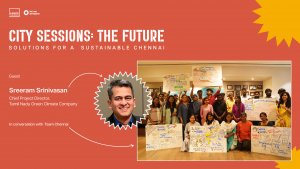 Radhika Deonalli
Do you have a story to tell?