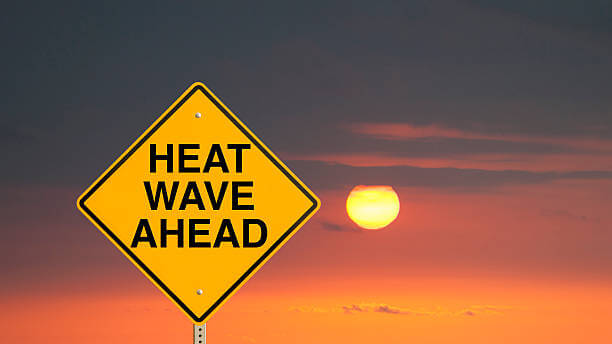 Stay alert against heatwave, warn experts
As the deadly heatwave makes its appearance again across northern India and Pakistan, one can’t ignore the extreme climatic conditions anymore. As per India’s weather department, heatwave spells are likely to prevail over northwest and central India during the next four days. Recent analysis by climate scientists has directly connected the heatwave with human-caused climate change. Temperatures are forecast to rise […]

As the deadly heatwave makes its appearance again across northern India and Pakistan, one can’t ignore the extreme climatic conditions anymore. As per India's weather department, heatwave spells are likely to prevail over northwest and central India during the next four days. Recent analysis by climate scientists has directly connected the heatwave with human-caused climate change.

Temperatures are forecast to rise to 50°C in Jacobabad, Pakistan - one of the hottest places on the planet - approaching the temperature record for the city. India’s capital, New Delhi, could reach 44 - 45°C - approaching its record April temperature - while some parts of northern India could reach 47°C. Heatwave warnings have been issued, with public health experts warning that extreme heat so early in the year is particularly dangerous.

New analysis by Dr Mariam Zachariah and Dr Friederike Otto looked at the high temperatures seen in India earlier this month and found that this  extreme heat in India is already much more common as a result of higher global temperatures caused by human activities:

Dr Zachariah, Research Associate at the Grantham Institute, Imperial College London, said, “The recent high temperatures in India were made more likely by climate change. Before human activities increased global temperatures, we would have seen the heat that hit India earlier this month around once in 50 years. But now it is a much more common event - we can expect such high temperatures about once in every four years. And until net emissions are halted, it will continue to become even more common."

Dr Friederike Otto, Senior Lecturer in Climate Science at the Grantham Institute, Imperial College London, said, “India's current heatwave has been made hotter by climate change that is the result of human activities like burning coal and other fossil fuels. This is now the case for every heatwave, everywhere in the world. Until net greenhouse gas emissions end, heatwaves in India and elsewhere will continue to become hotter and more dangerous."

Dr Otto leads the World Weather Attribution group and was named as one of TIME magazine’s most influential people of 2021.

The forecast temperatures are similar to those seen in the deadly heatwaves that hit India and Pakistan in May-June 2015, which killed at least 4,500 people. Recently, New Delhi airport reached 44.6°C, while the hottest temperatures in India were seen in Jharsuguda, Odisha at 49.4°C. In Pakistan, Karachi saw temperatures of 45°C, while other cities in the Balochistan and Sindh provinces reached 49°C.

India has already suffered the hottest March in 122 years of weather data, and parts of the country are seeing wheat yields drop 10-35% in part due to the unseasonal heat - as they try to make up the shortfall caused by the Russian invasion of Ukraine.

Experts in India are also stressing the need for actions to help people survive the climate change-driven extreme heat.

Dr Abhiyant Tiwari, Assistant Professor & Programme Manager, Gujarat Institute of Disaster Management, said, "While taking mitigation measures is a must to limit future warming, the extreme, frequent, and long-lasting spells of heatwaves are no more a future risk. It is already here and is unavoidable. Our heat action plans must ensure adaptation measures like public cooling areas, ensuring uninterrupted electricity, access to safe drinking water, and changing the work hours of labourers for the most vulnerable ones at the bottom of the pyramid, especially during extreme heat days."

People need to watch out for these advisories, stay indoors, keep themselves hydrated and rush to the nearest health centre if they feel moderate signs of heat-related illness. There's a special need to monitor the old and vulnerable, just like we did during COVID as they can develop heat strokes even when sitting at home."

Cities should monitor all-cause mortality data daily along with data for hospital admissions and ambulance calls to compare it with the last five years of data to get the real indication of heat stress on mortality. "This is a very early heat wave and these normally have a higher rate of mortality since adaptation and preparedness is lower during these months of March and April. The central, state and city governments should also focus on this, especially when IMD alerts are in orange and red and they should put out warning advertisements in newspapers, TV and radio to warn the public. This is a warning signal for what is to come in May and June. If we take effective action now we can prevent a lot of morbidity and mortality," he added.

In West Bengal, the local government has advised schools to shift classes to the cooler morning hours and stock up on oral rehydration salts, in case children become sick. Some schools are even moving classes online, so children don’t have to venture outside in blistering conditions. Meanwhile, in Odisha, higher education classes have been stopped completely.

While the temperatures in South Asia are likely to be the most extreme seen around this time, the subcontinent is not the only place being hurt by heat right now. In Argentina and Paraguay there is an exceptional heatwave as it is  in China and  in Turkey and Cyprus. As emissions drive further heating, these dangerous extremes are likely to become ever more common.