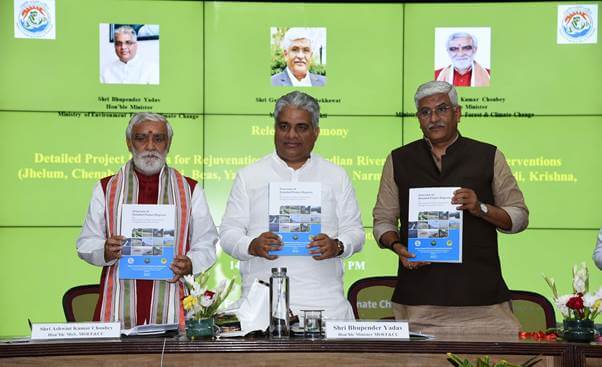 Rejuvenation plan for 13 Indian rivers by forestry interventions released by the government
India’s Environment, Forest and Climate Change Minister, Bhupender Yadav and the Minister for Jal Shakti, Gajendra Singh Shekhawat jointly released the Detailed Project Reports (DPRs) on Rejuvenation of 13 major rivers through forestry interventions on March 14, said a press release by the Ministry of Environment, Forest and Climate Change. The 13 rivers for which […]

The 13 rivers collectively cover a total basin area of 18,90,110 sq. km that represents 57.45% of the geographical area of the country. The length of 13 rivers including 202 tributaries within the delineated riverscapes is 42,830 km.

As per the press release, Yadav said "The projects will alleviate the growing water stress and help achieve national goals related to climate change and sustainable development."

"These DPRs are in line with the holistic vision of Prime Minister, Narendra Modi of making the coming 25 years as ‘Amrit Kaal’ as these DPRs will create a target of green cover expansion for upcoming 10 years and 20 years, then the future generations will get a ‘Green India’ through the ‘Van Bhagidari and Jan Bhagidari’ of the current generation." Yadav added.

The DPRs were funded by National Afforestation & Eco-development Board, (MoEF&CC) and prepared by Indian Council of Forestry Research & Education(ICFRE), Dehradun.

Growing water crisis on account of depleting fresh water resources especially due to shrinking and degradation of river ecosystems is a major impediment to achieving national goals pertaining to environment, conservation, climate change and sustainable development.

"The day we stopped thinking about what we give back to the rivers, when we did not balance the need for development with environmental sustainability, when we stopped becoming custodians of nature and rather forced our ownership on it, we have started exploiting and over exploiting our resources," said Shekhawat.

A total of 667 treatment and plantation models are proposed in all the 13 DPRs meant for the proposed forestry interventions and supporting activities, in different landscapes.

Each DPR incorporates detailed geospatial analysis of the delineated Riverscape, exhaustive review on the river environment, factors responsible for the current state and prioritization of areas using Remote sensing and GIS techniques along with field verification for proposed forestry interventions and other conservation measures.

The proposed cumulative budget outlay of thirteen DPRs is Rs. 19,342.62 crore. The DPRs are expected to be executed through the State Forest Departments as nodal departments and with convergence of schemes of other line departments in the states.

The activities proposed in the DPRs shall help achieve potential benefits of increasing the green cover, contain soil erosion, recharge water table and sequester carbon dioxide in addition to benefits in the form of non-timber forest produce.