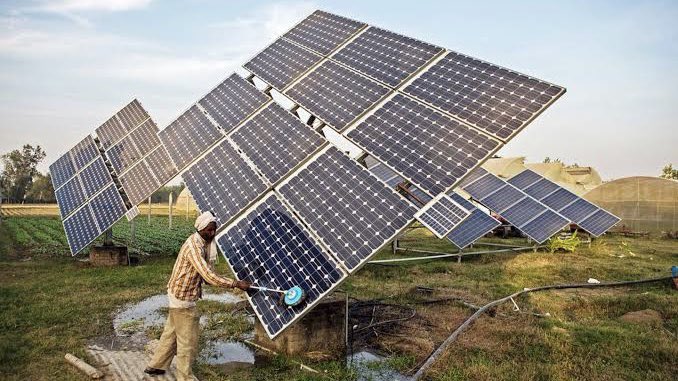 Installed capacity of solar energy increased more than 18 times in India over the past seven years: Ministry

From March 2014 to October 2021, India’s installed capacity for solar energy increased more than 18 times, said a press release by the Ministry of Environment, Forest and Climate Change.

While addressing the Lok Sabha on December 6, 2021, India’s Minister of State for Environment, Forest and Climate Change, Ashwini Kumar Choubey said that the country is committed to development along a low-carbon pathway while maintaining its commitment to sustainable development.

Through the National Action Plan on Climate Change (NAPCC) and its various National Missions, India is addressing climate change mitigation and adaptation across a range of sectors.

As per India’s third BUR submitted to the UNFCCC in February 2021, total GHG emissions, excluding Land Use Land-Use Change and Forestry (LULUCF) in 2016 were 2,838.89 million tonne CO2e and 2,531.07 million tonne CO2e with the inclusion of LULUCF.

India is making every effort to decouple its growth from emissions, by steadily lowering the emissions intensity of its GDP over the years. This keeps India’s GHG emissions below what would otherwise have been emitted.

“As a developing country Party under the UNFCCC and its Paris Agreement India is committed to development along a low-carbon pathway while maintaining its commitment to sustainable development. To meet this objective, India has undertaken a number of programmes, initiatives, schemes and other steps,” said Mr. Choubey.

Under Unnat Jyoti by Affordable LEDs for All (UJALA) scheme, a total of 36.78 crores LED bulbs have been distributed to enhance energy efficiency. Perform Achieve and Trade (PAT) scheme for energy efficiency in industries and other energy-intensive sectors resulted in total savings of approximately 13.28 million tons of oil equivalent, translating into 61.34 MtCO2 of avoided emissions in the PAT Cycle II.

Further, the Government has also initiated a project across the States of Andhra Pradesh, Maharashtra, and Odisha on Enhancing climate resilience of India’s coastal communities at a total cost of US $130.269 million which includes a grant of US$ 43.419 million by Global Climate Fund (GCF) covering 24 ecosystems in these selected States which aims to strengthen the climate resilience of coastal communities by protecting and restoring India’s natural ecosystems such as mangroves and seagrass.