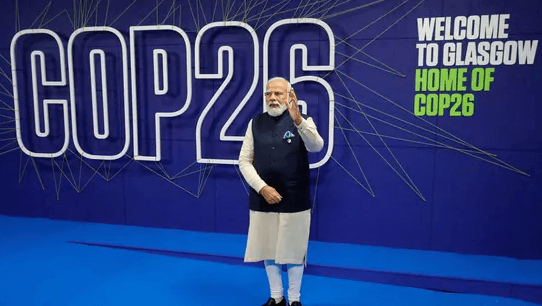 India is all geared up to transition to Zero Emission Vehicles
1
On Wednesday (10th November), governments and stakeholders continued to hold meetings and sessions, with a special focus on transport. India has joined over 30 other countries in signing a declaration at COP26, that promises to work towards ensuring that only zero-emission cars and vans are sold by the year 2040. India has also joined a […]

On Wednesday (10th November), governments and stakeholders continued to hold meetings and sessions, with a special focus on transport.

India has joined over 30 other countries in signing a declaration at COP26, that promises to work towards ensuring that only zero-emission cars and vans are sold by the year 2040. India has also joined a Zero Emission Vehicle Transition Council that will discuss ways to accelerate the push towards early adoption of zero-emission vehicles.

What is interesting to note is that this timeline is meant mainly for the developed country signatories, and is not a legally-binding commitment. Emerging markets like India have only promised to work “intensely towards accelerated proliferation and adoption of zero-emission vehicles”.

The declaration formed a sideshow at the UN climate conference (COP26) currently underway at Glasgow, and is one among the many voluntary initiatives that different sets of countries launch at these meetings.

In the past, India had announced that it planned a 100 per cent transition to electric vehicles by the year 2032. Considering the target as an impossible task, it has since been modified — 30 percent of all passenger cars and 70 percent of commercial vehicles are now supposed to become electric by 2030. This has been topped with the introduction of electric two-wheelers and three-wheelers, which is also being pushed in a big way.

COP26 President, Alok Sharma appreciated the move and said, “Climate vulnerable countries on the front line of the climate crisis will continue to bear the brunt. Before it engulfs us all. We are not seeking to reopen the Paris Agreement. The Paris Agreement clearly sets out the temperature goal. Well below 2 degrees and pursuing efforts to 1.5 degrees. We seek to chart a path that is balanced across the three pillars of the Paris Agreement: finance, adaptation and mitigation."

Road transport accounts for about 10 percent of global greenhouse gas emissions. A significant reduction in this sector will be essential to meet the goal of keeping global temperature rise within 2 degrees Celsius from pre-industrial levels.In the declaration, emerging economies like India called on developed countries to “strengthen collaboration and international support to facilitate a global, equitable and just transition” towards zero-emission vehicles.

Major automobile companies like Ford, General Motors, Mercedes-Benz, Jaguar Land Rover and Volvo, have also signed the declaration, promising to work towards “100 percent zero emission new car and van sales in leading markets by 2035, or earlier”. However, three of the leading car markets — United States, China and Japan — are not a part of this initiative.

Here are six other announcements that were made following those discussions -

1. At the World Leader Summit, 30 countries have agreed to work together to make zero emission vehicles the new normal by making them accessible, affordable, and sustainable in all regions by 2030 or sooner

2. A number of emerging markets are agreeing to accelerate the transition to ZEVs in their markets (including India, Rwanda, Kenya)

3. This goal is guiding the Zero Emission Vehicle Transition Council (ZEVTC) on the transition in Emerging Markets and Developing Economies (EMDEs), to discuss how international collaboration can support a global transition. The ZEVTC will launch its first annual Action Plan, which sets out areas for sustained international cooperation to accelerate the transition during 2022. The US has today joined the UK as a co-chair of the ZEVTC.

4. Launch of a new World Bank trust fund that will mobilise $200 million over the next 10 years to decarbonise road transport in emerging markets and developing economies.

5. Nineteen governments have also stated their intent to support the establishment of ‘green shipping corridors’ – zero-emission shipping routes between two ports. This will involve deploying zero-emission vessel technologies and putting alternative fuel and charging infrastructure in place in ports to allow for zero emission shipping on key routes across the globe.

6. The UK has pledged to shift to clean trucks by committing to end the sale of most new diesel trucks between 2035 and 2040.