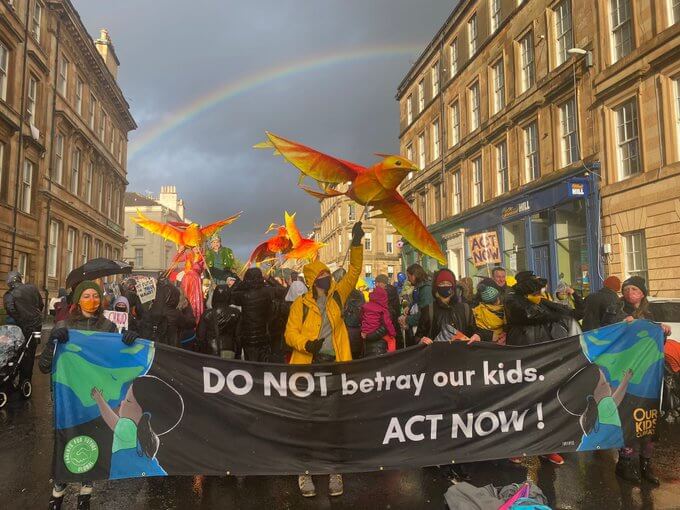 These mothers want clean air and took a historic stand at COP 26
Glasgow: If I ask you, what do countries like Brazil, Nigeria, India, UK, Poland and the US have in common? I wouldn’t expect an answer claiming rising air pollution.  Recently, around 500 parent groups from 44 countries (including India, Brazil, United States, United Kingdom, South Africa, Poland, and Nigeria) delivered a letter to President of […]

Glasgow: If I ask you, what do countries like Brazil, Nigeria, India, UK, Poland and the US have in common? I wouldn't expect an answer claiming rising air pollution.

Recently, around 500 parent groups from 44 countries (including India, Brazil, United States, United Kingdom, South Africa, Poland, and Nigeria) delivered a letter to President of COP 26, Alok Sharma, demanding  an end to new fossil fuels financing for the sake of their children’s health and clean air.

Rosamund Adoo-Kissi-Debrah, who lost her nine-year-old daughter Ella due to severe asthma linked to air pollution, led the delegation. Addressing the delegation, she said, “We are calling on world leaders at COP26 to implement the new WHO Guidelines, clean up our air and stop our children dying. This means ending new fossil fuels right now. Governments cozying up to fossil fuel companies and wasting taxpayers’ money to look for even more is just unacceptable.”

Each woman in the delegation has a reason to be there - they have first-hand experience of watching their own children suffer as a result of air pollution caused by the burning of fossil fuels.

“We are worried about the future of our children” was a common war cry for a delegation of mothers as they delivered the letter.

Amuche Nnabueze, a parent and teacher at the University of Nigeria, was standing next to a creative action led by doctors, demanding clean air. In our brief conversation, she highlighted the impact of new fossil fuel exploration on bad air and an urgent need for collective action to create a better future for the next generation.

“As a child my younger sister used to have asthma attacks. Luckily she outgrew it, but I see the impact on the children in our care. When the air quality changes drastically, you find a lot of cases of asthma attacks or the need for nebulisers. Pollution affects their lives individually.”

Worried about the lack of credible air pollution data in Nigeria, Amuche is aware of Nigeria's unique situation - the country's inherent dependency on Fossil Fuel and the massive food insecurity. Being an optimist, she was hopeful and optimistic about the outcome of the COP 26 conference.

“We continue to live like it is all okay, like it is normal. But it is going to get worse. Science has already told us - we don’t have time, we have to act now. We don’t have to wait until it is too hot or it is too late to do anything. This is why we are here and we want to bring all fossil fuel exploitations to an end.”

Marianna Menezes, a parent from Brazil said, “Air pollution has impacted every home, every family and Brazil is no different. Our children don’t have to deal with pollution in the future, it is an issue of the present. They are already innocent victims of fossil fuel burning. The letter wants to share stories of mothers from across the globe to tell people - it is time to think about which planet do you want to give to our children and in what condition will we hand it over.”

Marianna moved from a big city like Sao Paulo to a smaller city Porto Alegre in Brazil and is in the process of moving to an even smaller town now. She had many health issues, which she connected to bad air, but mentioned how all her health problems went away as soon as she moved to a smaller town. Connecting this to her cause which is lower dependency on fossil fuels for development. According to her vehicular pollution is one of the biggest causes of bad air in many Brazilian cities and seeks better transport regulations for cleaner fuel as an urgent need.

The recent burning of forests in the Amazon  has also increased air pollution in many Brazilian cities, But, Marianna is concerned about the lack of action amongst citizens, stating that if everyone comes together there's hope.

Lets not forget that the ‘air pollution exodus’ is already a reality. We have seen people moving to newer places in search of cleaner air.

One of the early signs of what’s to come if we don't cap it at 1.5? Psst. Are you listening? You know who you are!

Bhavreen Khandhari from Warrior Moms, India, a group of mothers fighting air pollution in India, observed,  “My girls live with a very high risk of developing respiratory infections that stem from Delhi’s excessively polluted air. For children to have the lungs of a smoker by their teens, through no fault of their own, just by breathing air is absolutely unacceptable. We need governments to listen to us.”

Bhavreen is in Glasgow where air quality ranges between 20-30, but back home in New Delhi her kids woke up to an air quality above 500. Since it is air pollution season in many Indian cities right now.

Some 93% of children worldwide breathe toxic air. Air pollution is the most significant health crisis facing children today and is directly related to the climate crisis: fossil fuel burning is the lead cause of both. Children are especially vulnerable because they tend to spend more time outside and are more active than adults. Children in marginalised communities and those in the Global South are exposed to higher levels of air pollution, and most vulnerable to the accelerating climate crisis.

“My children are growing up in the country that is the most polluted and one of the biggest polluters in Europe. My children cough and suffer respiratory diseases because of toxic coal pollution. I can't stop them getting sick unless our leaders make bold choices. This COP26 needs to consign new fossil fuels to history. My children are too small to demand that today, so I am here for them, and for the millions of other children living in polluted regions of the world. Please protect our children's health now and give them a brighter, safer future,” said Kamila Kadzidlowska, a Polish mother from Rodzice Dla Klimatu, whose children have suffered as a result of air pollution from coal-fired power stations.

The letter from parents says that there are “already more than enough fossil fuels discovered to dangerously heat our planet beyond 1.5ºC and keep poisoning our children’s air.” It calls on leaders to listen to experts such as the International Energy Agency, which has warned that there should be no more coal, oil or gas investments if we want to keep 1.5ºC in sight.

In the letter, the parents told delegates, “We make decisions every day for our children’s long-term future, and here at COP26, so do you. You have a unique responsibility and opportunity to protect all children, present and future.”

While governments continue to approve licences for new mines, wells and infrastructures. Just last year, fossil fuels received $5.9 trillion in subsidies in 2020 (around $11 million every minute). The parents have urged governments to radically rethink.

Xoli Fuyani, Our Kids’ Climate in South Africa knows the disproportionate burden that children in the Global South are experiencing as they have front row seats to the brunt of the climate crisis. She said, “Act to give them a future. Why are governments still subsidising the search for more fossil fuels with public money every year? Why are they approving licences for new mines, wells and infrastructure? Our children deserve better!”

Molly Rauch, Public Health Policy Director, Moms Clean Air Force in the US, wants to focus on the bigger picture. Urging everyone to act now, she said, “Climate change is an urgent public health crisis, and our children are in the crosshairs. The good news is that if we solve for one of these problems, we solve for the other, and the health benefits will be enormous. But, as the world's scientists have told us, there isn't a single moment to waste."

Rosamund, Amuche, Bhavreen, Molly, Xoli, Kamila and so many more mothers continue to be optimistic for a cleaner future for their children, but demand immediate collective action to do so.

And as Dr Maria (WHO Director, Public Health, Environmental and Social Determinants of Health) said today “When you have moms fighting for something you’d better watch out, because we are going to win.”