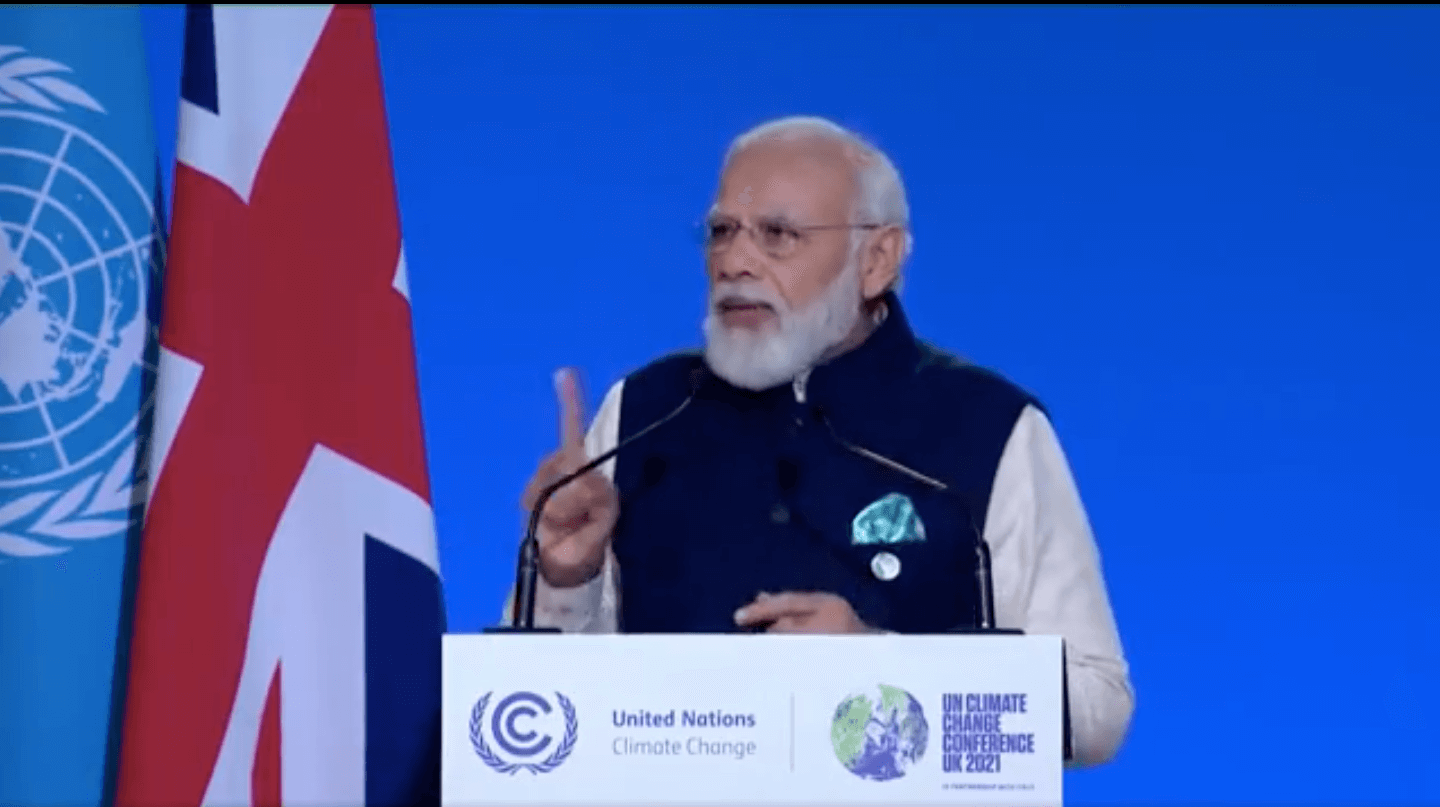 Let’s make adaptation the centre of our development policies: PM Modi shares his ‘Panchamrut Ki Saugat’ at COP26 Summit
Prime Minister Narendra Modi addressed at COP26 on Monday emphasising on the need of focusing on adaptation measures. Modi at the event said that in the global climate debate, ‘adaptation’ did not get as much space as ‘mitigation’. Offering a new mantra and raising its pledge for combating climate change, Prime Minister Narendra Modi addressed […]

Prime Minister Narendra Modi addressed at COP26 on Monday emphasising on the need of focusing on adaptation measures. Modi at the event said that in the global climate debate, ‘adaptation’ did not get as much space as ‘mitigation’.

Offering a new mantra and raising its pledge for combating climate change, Prime Minister Narendra Modi addressed world leaders at the COP26 that India will target a net-zero goal by the year 2070 and aim at increasing its non-fossil fuel energy to 500 GW in its energy mix by 2030.

Terming it as 'Panchamrut Ki Saugat' - India's contribution to climate action called as Nationally Determined Contributions (NDCs), PM Modi while speaking on the first day of the high-level segment at the COP26 said India will reduce its carbon intensity by 45 per cent by 2030 starting with reducing projected carbon emission from now till 2030 by 1 billion tonnes and committed to have renewable energy component of 50 per cent by 2030.

The Prime Minister gave certain key goals or panchamrut to be adapted by India to counter climate change:

Talking about the effect of climate change on small farmers in India, PM Modi said it was forcing them to change their cropping patterns. “For the farmers of developing nations such as India, climate change is a big challenge. Floods come at an unexpected time and simultaneous storms are causing crop damage,” said Modi.

He then called for local support for global adaptation.

Addressing the COP26 Summit, he stressed on the need to include climate change adaptation policies in the school syllabus to make our next-generation aware of key global issues. "From sources of drinking water to affordable housing, all need to be made resilient against climate change," he added.

Modi emphasised on three key points in his speech- first, adaptation should be at the centre of development policies and projects. Talking about the same, Modi said that in India ‘tap water for all’, ‘clean India mission’ and ‘clean cooking fuel for all’ have not only given the adaptation benefits but have also made the quality of life better for the people.

Second, the prime minister said that several traditional communities have the knowledge of living in harmony with nature. “These traditional practises should get due importance in adaptation policies,” said Modi. He emphasised that such a knowledge should be passed on to the generation by adding it into the school syllabus.

Emphasizing on the third key point, PM Modi said that even as the methods of adaptation may be local, the developing nations should get global support for the same. “With the very same thought, India initiated Coalition for Disaster Resistant Infrastructure (CDRI)”, said Modi. He urged all nations to join the initiative.

As mentioned in an article by IndiaSpend messages from the ministry in the last few days have conveyed that India is expected to announce an enhanced NDC factoring in its overachievement of its 2022 pledges and ambitious renewable energy targets of 450 GW, scaling up hydrogen production, and including sector-specific emission reduction goals -- but no net-zero target.

The goals stated by Modi are not only ambitious in nature but also a big step taken up by a developing country in terms of climate change. Renewable energy has been accepted as a medium of change by the environmentalists of the country.