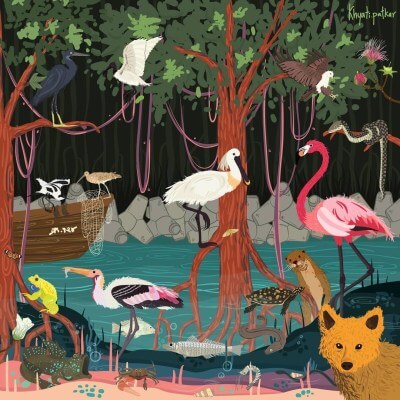 A virtual art gallery launched in support of Mumbai’s wetlands
Biodiversity by the Bay’s campaign #MakeArtforMumbaisMangroves launched a virtual gallery on World Environment Day (June 5th) to showcase the diverse artworks that the movement has received from young creatives in support of Mumbai’s unique green ecosystems. The campaign to create a conversation around Mumbai’s rich biodiversity began on 22 April (Earth Day). Over the course […]

Biodiversity by the Bay’s campaign #MakeArtforMumbaisMangroves launched a virtual gallery on World Environment Day (June 5th) to showcase the diverse artworks that the movement has received from young creatives in support of Mumbai’s unique green ecosystems.

The campaign to create a conversation around Mumbai’s rich biodiversity began on 22 April (Earth Day). Over the course of the next one and a half months, it reached over 4 million viewers, engaged over 240,000 audiences, and received over 80+ submissions.

A zine featuring select 50 artists is also in the works with the aim to be presented to Mumbai's Environment Ministry and drive citizen action in favor of the city's wetlands.

Among 22 Indian cities, Mumbai had lost the maximum number of wetlands – 71% – between 1970 and 2014, according to a study (2020). Wetlands in Maharashtra, especially Mumbai, are threatened by a high level of water pollution and solid waste dumping, combined with developmental threats.

Further, Mumbai’s mangroves are indispensable to the city - with the inevitable rise in sea levels, and the recent Cyclone Tauktae that flagged the west coast of the country, it is only more evident that mangroves form natural barriers against such extreme weather events. As climate scientist Dr. Roxy Mathew Koll suggested recently, “Mangroves act as the sponge of the city, breaking the flow of flash floods and absorbing the impact. Mumbai lost a lot of its mangrove cover and freshwater drainages, and we need to recover them.”

The artists used various mediums and artistic expressions - From Koshy Brahmatmaj’s embroidery work, Aditi Mali’s comic strip art to Samya Ghosh’s use of playing with negative space and typography - their artworks highlight the important role mangroves play in maintaining the ecological balance of the city.

While some artists like Nitasha Nambiar and Mrinmayi Dalvi focus on how mangroves act as natural buffers against coastal erosion and flooding, others like Tanya Timble and Khyati Patkar paint a picture of them as the thriving home to countless species of flora and fauna.

The aspect of sustaining the livelihoods of Mumbai’s Koli communities, who are dependent on the mangroves for their survival, has been vividly captured by artists like Gary Curzai and Niyosha Bhagat. A need for better urban planning to tackle the inevitable rise in sea levels is dramatically displayed by illustrators like Harmeet Rahal and Sid G. The campaign is also supported by well-known artists like Rohan Dahotre and Parag Kamal Kashinath Tandel.

“Art has a way of speaking to people. It draws their attention, visualizes their thoughts and weaves a sense of belonging. With the inevitable rise in sea levels, protecting Mumbai’s mangroves and biodiversity is crucial for the city. In the midst of a pandemic when our future looks so uncertain, it's important to protect the things we can depend on,” said Suma Balaram from the Ministry of Mumbai’s Magic Team.