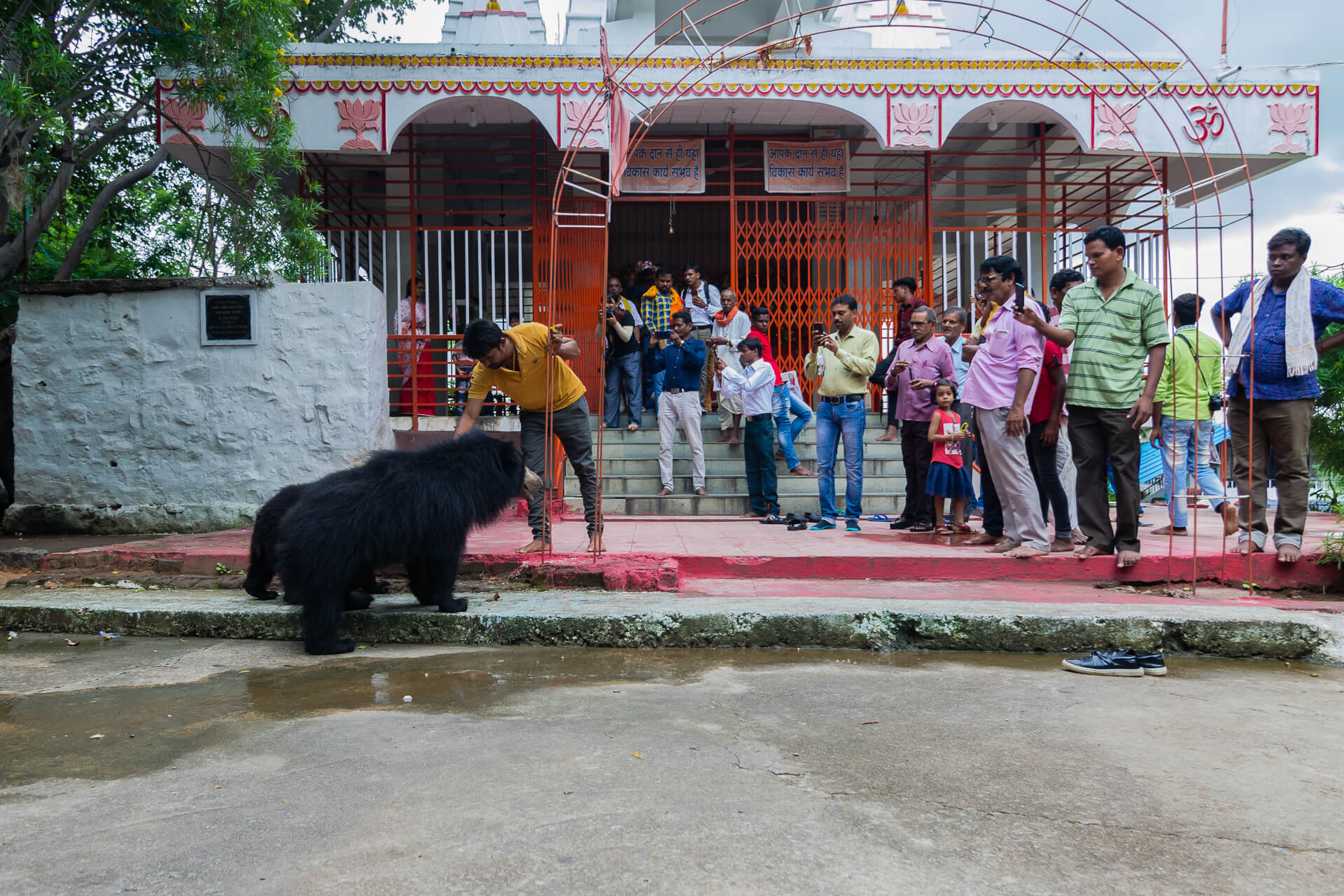 How we met the wild bears of Bagbahara
Ever heard of Wild bears visiting a temple? They are taking ‘prasad’ from priests and roaming freely in the temple premises? People taking selfies with them and surprisingly they are not hurting humans or vice versa? As strange as it might sound, All these are actually happening somewhere in India and that too in the […]

Ever heard of Wild bears visiting a temple? They are taking ‘prasad’ from priests and roaming freely in the temple premises? People taking selfies with them and surprisingly they are not hurting humans or vice versa? As strange as it might sound, All these are actually happening somewhere in India and that too in the 21st century. Unbelievable…. isn’t it?

We were just not ready to buy any of these when a friend of mine told me that she came across ‘junglee bhalu’ in a temple near Raipur, Chattisgarh. But when she showed a selfie with bears it baffled us completely. We immediately decided to go there and witness this on our own. Without wasting time, we packed our bags, booked tatkaal tickets and almost blindly landed at Raipur in the middle of a week. All we had was information that the bears visit the Chandi Mata temple of Bagbahara which is approximately 100 km away from Raipur as learned from Google.

After reaching Raipur an auto driver agreed to take us there. As we were enquiring about the place, during our 3-hour auto journey we came to know a few things about the temple and its majestic guests; the Indian Sloth Bears.

The Chandi Mata Temple is situated in Ghunchapali village of Mahasamund district in Chhattisgarh. It is located atop a hill surrounded by lush green forests and rocks. The Chandi Mata idol is approximately 150 years old and according to locals, the idol is completely naturally formed. Until any permanent temple structure was made here, this was a place for ‘Tantra Sadhana'. The temple was made during the period of 1949-50 and it was opened for common people in the same year.

The entrance of the temple is furnished with some rock paintings which are of different wild animals. Some paintings were “warnings” about the presence of wild bears and not to disturb them. One flower-seller mistook us as reporters and told us to wait for ‘darshan’ of bears till afternoon as he promised us that this temple would show us something that the whole world can’t illustrate.

We waited with suppressed anxiety and exhilaration in the big hall inside the temple premise. The premise itself was enormous, clean, and beautiful. Other than Mata Chandi's temple there was also a Hanuman Mandir, Bhairavnath’s temple, and a big Dharamshala made for the pilgrimage.

We were almost dozing and suddenly someone’s voice ……“bhaloo aa gaya” hit our ears and in no time we rushed out of the waiting hall and joined a small crowd who were converging on the backside of the temple. Following them we reached the place and got dumbstruck to see one wild sloth bear with her two cubs(around 6 months old) peacefully sitting upstairs and people waiting with eatables and prasad to feed them.

Two men deployed by Forest Department were managing the crowd so that they don’t go overboard in excitement. Visitors started to give foods like dates, bananas, biscuits, coconuts to the momma bear One by one, while the two cubs were totally disinterested in foods and were busy wrestling amongst themselves. Mandir priest offered Prasad, some took selfies and some did ‘pranams’ to the Bears.

I totally thought they were pets though the cubs were not at all human-friendly. But Forest Dept. people ensured us that they were absolutely wild and told two of us to follow them as they would show us the actual ‘bear-house’. After taking prasad, the bear family returned back through the rocky trails and greens and vanished behind the temple. We noticed from a distance that it was a ‘Chattan’ (a cliff eroded gradually making a smooth stony yard type place naturally) with greens peeping hither and thither and big and small rocks studded over the place providing them a perfect place for staying and hiding.

Mahesh Chandrakar Ji, who was in-charge of the bears as well as the humans here from Forest Dept., showed us another hill nearby and told us another bear family stays there who visit the temple in the morning. The next day also, at around afternoon we saw another lone, comparatively aged female bear to visit the temple for food. But we came to know that the bear family we already met the other day keeps a certain distance from this individual for some reason. Though she couldn’t pose any threat to even a stray dog living in the temple, who kept on sharing the food with her!!

it was really something incredible and satisfying to see this extraordinary coexistence of man and wild. Such wonder of wild bears visiting temple area is happening since last 5 to 6 years. In initial days, visitors and pilgrims were too frightened to pay their visit to the temple and offer pujas.

At that crisis, the-then priest took the responsibility of building the mutual trust and love between bears and humans by putting it up in view of religious context and divine occurrence. The priest noticed that bears meant no harm and only were interested in foods and he made others believe that there must be some divine connection between the bears and the Chandi mata and urged people to treat them reverentially.

Gradually, a mutual trust grew between the local human inhabitants and the wild and to date not a single case of humans getting attacked by the bears have reported so far. Some of the devotees think that the bears are ‘shaapit vakht' (cursed disciples) of Mata who might find mukti (absolution) if they visit regularly ‘mata ki mandir'. Some believe they are re-incarnation of Jambuban (a mythical character from the Indian epic Ramayana) and their presence makes the temple more powerful, sanctum and pious.

Of Course, the Forest Dept. persons have altogether a different and more practical say on this. According to them, there were more bears (6-7) in the hills and they might have started to visit the temple for scarcity of natural foods or perhaps they had become lazy to find food by themselves as they got easier options here in the temple.

Though they are afraid that continuous ingestion of sweet foods might harm them and they claim nowadays they have curtailed bears' shares which are offered by devotees. But they could not completely stop that because of the religious faiths and emotions attached to it. volunteers from the Dept. also give them medicines if they fall or get injured in a unique way. They punch medicine in Fruity mango drink as the adult bears are die-hard fans of it!

Although wildlife experts would obviously argue that this is not a healthy way to treat wild animals who are always better left untouched by humans.

But, in this present scenario of India where every day we come across reports of conflicts and subsequent deaths or injuries to either wild animals or humans, where our zero-understanding about the behaviors of wild animals leads to miscellaneous problems and brutalities, this unfamed temple in a remote and isolated village of Chhattisgarh could be a model of man and wild co-habitation, where mutual trust, even if it comes from deep religious views and minds, has led to this wonderful co-existence.