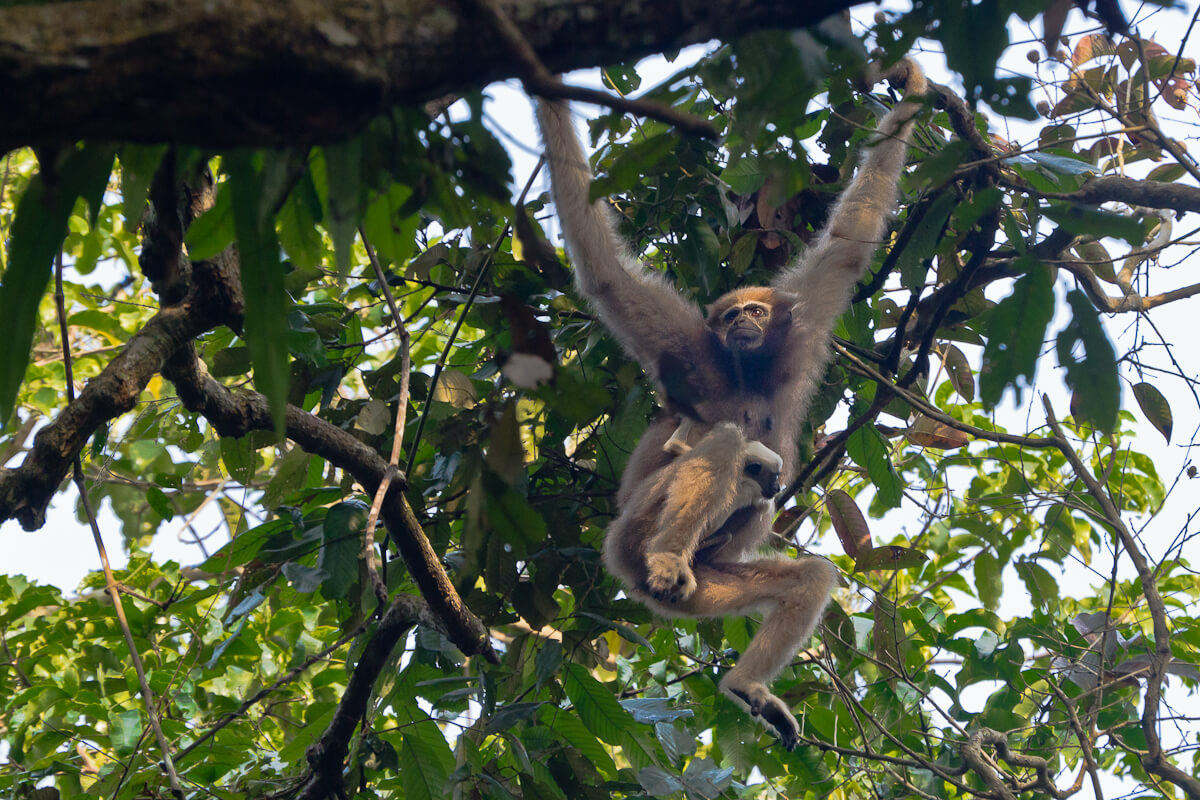 In quest of the only Ape in our country
Tucked in an isolated place of North-East India, wrapped up with semi-evergreen forests, guarded by the long prideful Hoollong trees, embraced with carols of birds, one will suddenly be startled with a weird yet exotic chant in the unique wildlife destination Hoollongapar Gibbon sanctuary. That strange chant will adrift from one tree to another ambushed […]

Tucked in an isolated place of North-East India, wrapped up with semi-evergreen forests, guarded by the long prideful Hoollong trees, embraced with carols of birds, one will suddenly be startled with a weird yet exotic chant in the unique wildlife destination Hoollongapar Gibbon sanctuary.

That strange chant will adrift from one tree to another ambushed in the dense canopy. Looking keenly one will behold the sight of a deep black coat swinging from tree to tree; India’s only ape the Hoolock Gibbon.

Following those slender arms eyes will soon detect an orange coat that is the female Hoolock gibbon and then a few more high atop the tree.

This is the sanctuary which is dedicated to the conservation of Hoolock gibbon besides being home to 6 other primates. This was formerly known as Hoollong forest which was declared as a reserve forest in 1881 and then declared a sanctuary in 1997.

Expanded over 21 sq. km, this sanctuary is a prime habitat of the Western Hoolock gibbon which is an endangered species according to IUCN Red data list 2000. Roughly 20 km away from the Jorhat town of Assam this sanctuary houses 7 primates of our country namely Assam Macaque, Pig-tailed Macaque, Stump-tailed Macaque, Rhesus Macaque, Capped Langur, Western Hoolock Gibbon, and extremely rare and nocturnal slow Loris.

This sanctuary is unique in it’s way of safari. One has to trade through the colored leaves of the forest where Malayan giant squirrel, Occasional pugmarks of Leopard will keep company. It is a walking safari.

We spotted a male Gibbon high on a tree sun basking and breakfasting with figs. They are frugivorous in nature; i.e they feed on fruits, leaves, tender buds, small berries to large elephant apple fruits. After a few minutes the orange coat of female appeared with a baby in her lap. She started to move fast from one tree to another and to get a better glimpse of it we had to rush through the thick under growths.

It sat on the highest branch of the tree and sun basked, a way to waver off the winter. Our guide Ananta Baruah da told us that they use the top canopy for roosting, basking and for taking rest. For movement they prefer middle and lower canopy and for food they prefer the middle canopy. This species is strictly arboreal.

With the help of their strong arms using the terminal branches of the close canopy, they swing from branch to branch, which is known as Brachiation. They are one of the smallest apes of the world weighing only 7-8 Kgs. Mostly they use 6 to 20-meter heights for their locomotion.

While we were trying to observe a new born gibbon’s inquisitive activity one furry black tail was seen in another tree. Few seconds after, one curious face peeped up from the branch. It was a Malayan Giant Squirrel which was obviously a lifer for us.

Though it was sitting in such a place from where making a photograph of the species was almost impossible, still trying our best we somehow managed a record shot of it. In the meantime, we spotted another Gibbon family on another tree calling loudly. Their strange loud, chaotic ‘Hoku’ ‘Hoku’ call was resounded among the trees. We came to know that by this call they defend their home territory. This actually defines a particular groups’ inhabited area. However, the old jungle myths offer a different angle.

There are many such myths of the tribes centering around the gentle Hoolock. The local Mishing tribe believes that Konkan and Konkani, a boy and a girl from a Mishing village fell in love with each other and consummated their love without marriage.

This act enraged the Mishing God Hokou, who transformed the couple into monkeys, cursed to spend their lives on trees. In dismay, the couple prayed to God by chanting ‘Hokou’ ‘Hokou’….a call that has since remained the distinguishing feature of Hoolock Gibbon.

Other than the Hoolock Gibbons, two other primates were quite common in the sanctuary. One is the ubiquitous Rhesus Macaque, which was commonly seen in groups carrying on with their various daily activities. Noticeably their population was mostly distributed near the entry points/gates of the sanctuary and none of them was seen deep inside the forest.

Another one is the Capped Langur. This species resembles with the more commonly seen Grey langur but the notable difference being the furry outgrowth on their head and cheeks and also the complexion. Dark grey to black fur of the back, fading to creamy white or golden yellow on the belly is the normal coloration of this species. They were much more cooperative in terms of photography than the Gibbons and always very much full of actions. They seemed quite accustomed to seeing human beings from a close distance.

While walking through the jungle at one point we saw a rail track ripped through the heart of the forest. This track is here since 1881 constructed during British rule for transportation of coal, oil, tea etc. We noticed a lone male gibbon is sitting atop a tree just aside the rail track looking on the other side of the forest.

We learned from our guide that he might be lovelorn as his lover might be on the other side of the rail track which he cannot cross. Gibbons need continuous forest canopy to move freely and any lacuna in the canopy hinders their locomotion.

Because of the presence of the rail track, gibbons are trapped in one small part of the forest. Although after many kinds of research forest Dept. with the help of the Indian Railway has built a tall bamboo bridge hoping that this would enable them to seamlessly move on both sides of the track, till now gibbons and other primates haven’t used that bridge at all.

We can hope that in near future this lovelorn gibbon will find his love on the other side and so will the others.