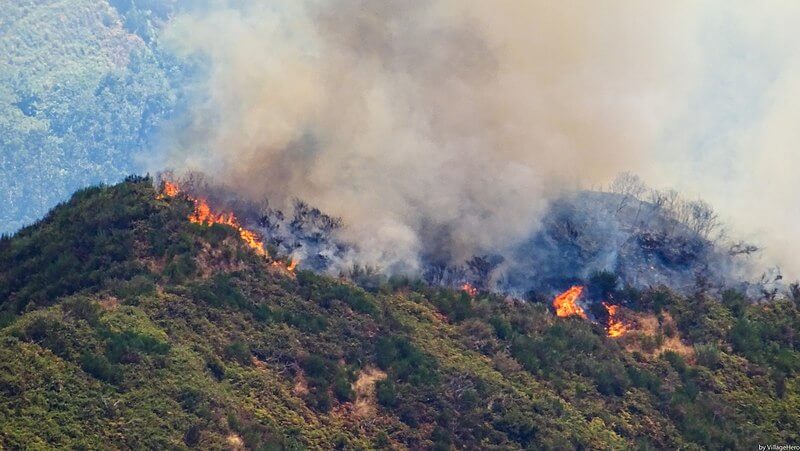 Decoding forest fires and how can we nip them in the bud
2
Forest fire is a natural phenomenon though in recent scenario, almost 98% of such incidents are induced by human activities. The low intensity Forest fires are significantly important as it clears build-up fuel material and also promote fire tolerant species while Forest fire of high intensity is major natural disturbance for the native biodiversity. According […]

Forest fire is a natural phenomenon though in recent scenario, almost 98% of such incidents are induced by human activities. The low intensity Forest fires are significantly important as it clears build-up fuel material and also promote fire tolerant species while Forest fire of high intensity is major natural disturbance for the native biodiversity.

According to FSI Report, in 2019 around1.45 a million hectares of forest area are affected annually in the country, and crores of economically worth timber and forest produce burns to ashes. Moreover, wildfires affect air quality, vegetation, human/animal habitats, and local climate. According to Global Forest Watch, India recorded 82,170 forest fire alerts in 2021, which is almost double the previous year's numbers.

The long dry spell, with low soil moisture and low humidity level, are some of the natural factors that determine the intensity of Forest Fire and during these sensitive months, even a small spark from cigarette butts or carelessly discarded lit matchsticks can set uncontrolled fire.

Many forest officials reported that forest fire is deliberately put on by locals to obtain good grazing land for livestock, recreational activities, ward off animals and sometimes they lit fires to take revenge from forest staff.

With respect to H.P., where I recently worked on Forest fires in Chail and Col Sher Jung National park both under the administrative control of Shimla wildlife division it is observed that the hilly terrain, inaccessible areas with no motorable roads, practicing traditional fire control practices are few reasons that contribute to non-effective measures to check wildfires.

Also, this state is dominated by coniferous vegetation which adds up a huge amount of pine needles that are rich in nitrogen content. This fuel ingredient is always a challenge to the forest department for its collection and proper disposal.

The forest fire has some positive effects, as found during my study, this includes -generation of fire-tolerant species, greater diversity of shrubs species in burnt areas and also of insects and butterflies while some of the serious negative effects were- opening up niches for invasion by non-native species and lower diversity of higher vertebrate species in burnt areas. A controlled fire is always prescribed to the forest department that reduces the changes in an intensified wildfire that cause damage a greater extent.

Though many preventive measures have been followed by H.P. forest departments such as involvement of locals for collection of fuel material and creation of fire lines now the focus should be shifted to the adoption of new and effective firefighting techniques such as- drone services, one to two firefighting helicopters deployed at the state level, reliable weather monitoring system, etc. along with regular awareness workshops with locals, managements of grasslands, etc.

Further as per section 26 of the Indian Forest Act, 1927 kindling of fire in reserved forest is illegal and anybody found to have committed this offense willfully can lose all rights to pasture and collection of forest produce of that area. Section 79 of IFA, 1927 also mandates that the local individuals assist the forest department in case of forest fire occurs.

As per Wildlife Protection Act, 1972, section 27 mandates any person living in or within the vicinity of the sanctuary to extinguish forest fire, and section 30 prohibit setting the fire, kindling fire or leaving any fire burning in the sanctuary area.”

Forest fires have increased over the years and as per studies, it has been concluded that 98% are human-induced which not only lead to financial losses but also contributing to the loss of biodiversity,  habitat, and microhabitat changes.

The anthropogenic factors leading to forest fires can be reduced to a much greater extent by applying the principle of awareness, educating people towards the cause and making them understand that the future of the human race lies on long-term strategies not on short-term gains.