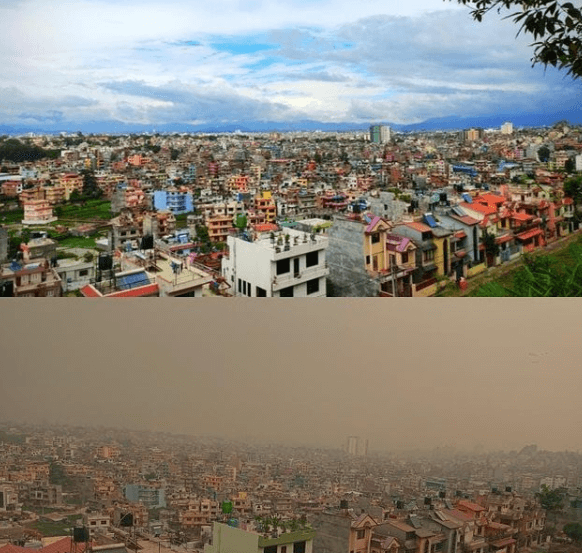 Why is Nepal witnessing extreme air pollution?
My country is going through a crisis. No, its not COVID pandemic. It’s air pollution. Nepal saw the worst pollution levels since 2016! At the end of the Nepali year, the weather starts changing, the transition of getting into summer has a variety of changes going on around, so the first thought of me and […]

My country is going through a crisis. No, its not COVID pandemic. It's air pollution. Nepal saw the worst pollution levels since 2016!

At the end of the Nepali year, the weather starts changing, the transition of getting into summer has a variety of changes going on around, so the first thought of me and my family was that this change is a part of that weather change that's happening.

The next thing we knew was news channels covering the news of Kathmandu witnessing extremely high levels of air pollution. The first response or the reaction was obvious, it was to minimize going out of the house. We also got an idea of why it is so bad when the government imposed a four-day holiday on educational institutions. About eight million students were affected by these closures. I was also pretty concerned because I've migraines and dealing with occasional headaches. As the atmosphere was full of smog, I knew what kind of difficulty I'll have to face in the upcoming days.

Talking about the reasons of this pollution crisis, reports suggest that there've been over 2,700 wildfire incidents in 73 of its 77 districts in Nepal since November 2020. Now, according to reports, Nepal received only 25 percent of normal rainfall in three months between December 2020 to February 2021. Obviously, this makes the weather dry, hen

While this remains a cause of this current crisis, pollution in Kathmandu is not a new concern.

The fuel run automobile density of Kathmandu city is so high with a minimal amount of quality control and this adds a lot to the pollution level. Pollutants increase from the smallest grassroots and yes it accumulates with time and everything has a peak so ultimately a crisis situation as now occurs.

The health effects related to this current pollution crisis range from short term to long term. When we talk about short term, it's so harmful that just ten minutes of walk outside can cause your eyes to start burning as if something is penetrating below your eyelids and also it's extremely difficult to have good vision because the whole atmosphere is full of smog.

Also, spending some time outside causes headaches and sometimes even dizziness while doing some work outside. Talking about the long-term effects, it's extremely dangerous for the respiratory system as oxygen level decreases by a big margin and also to the vision of the eyes.

Yes, the government doing what best it can to control the pollution levels but when it comes to the control of pollution, it's the people. People first need to understand that sustainability is a thing, they need to realize that sustainable development ways are possible but only one thing that needs to be penetrated inside the minds is 'long term thinking'.

Currently, people have been too impulsive on most of the life aspects and it applies to the environment too, until and unless we don't see any drastic changes, we don't care about it much but if we have to be even close to controlling a small percentage of existing pollution, that we must think sustainable. And the only way government can help is by constant monitoring and also incentivizing people for doing anything good for the environment at grass root levels.