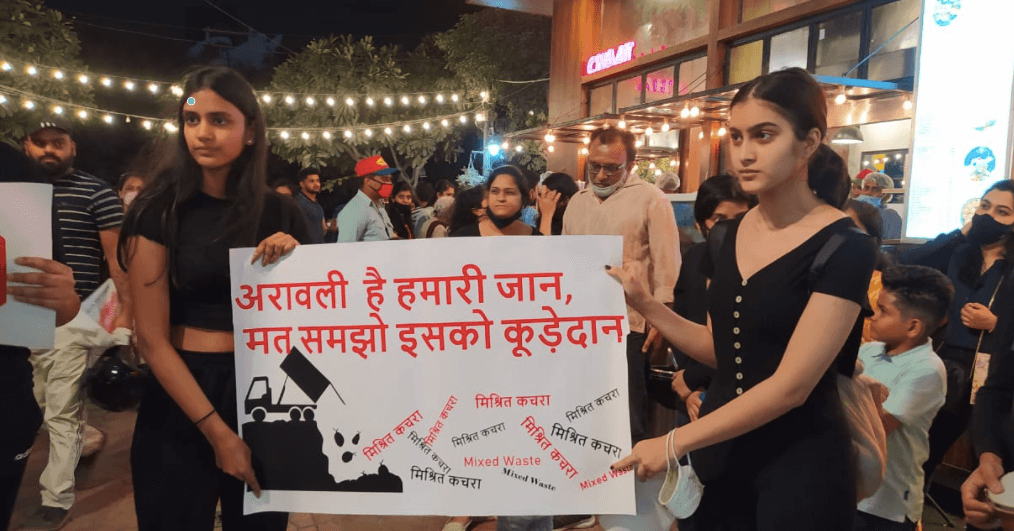 On February 28, 2021, to mark the 2nd anniversary of the Punjab Land Preservation Act Amendment (PLPA) Bill which was passed on 27 February 2019, students of Grade 11th, Heritage Experiential Learning School presented a demonstration at different locations in Galleria Market in Gurgaon. They recited a poem and gave a talk on the implications […]

On February 28, 2021, to mark the 2nd anniversary of the Punjab Land Preservation Act Amendment (PLPA) Bill which was passed on 27 February 2019, students of Grade 11th, Heritage Experiential Learning School presented a demonstration at different locations in Galleria Market in Gurgaon.

They recited a poem and gave a talk on the implications of the regressive Punjab Land Preservation Act Amendment Bill passed by the Haryana government which seeks to legalize all the illegal constructions in the Aravallis and open the Aravalli forests which only occupy 2 percent of Haryana’s land area for real estate development.

Shivika Chopra, a 17 year old member of the Students 4 Aravallis group working with the Aravalli Bachao Citizens Movement emphasised on the disastrously low forest cover of Haryana by saying, “Whereas the target of the Haryana Forest Department is to have 20% forest cover which is also the national average, our state’s forest cover is only a measly 3.6%, lowest in India.”

The students said that they want the government to implement native planting on war footing to increase the forest cover of the state to reach 20 percent to improve air quality and water security in the state at a time when climate change impacts are worsening.

“The earth has already warmed by 2 degrees as of 2020. Day by day we come closer to our doom and our government has the power to change this. It is of the utmost importance to save our Aravallis from the PLPA Amendment Bill 2019 and the upcoming Waste to Energy plant in Bandhwari to save the Aravallis, North India’s climate regulator, shield against desertification and critical water recharge zone to protect millions of people from the impacts of climate change,” said Tarushi Agrawal, another student who was part of the demonstration.

Awareness was also spread regarding the issues which the people who live near the Bandhwari landfill face with regards to their health as a result of the toxic underground water and also how the waste to energy plant being built in the Aravallis will not solve the issues but aggravate them further. Students explained to the people that waste to energy model is a failed model in India and how there is not one plant which is running successfully anywhere in the country.

Out of 11 waste to energy plants set up in India, more than half have closed down and the few that are operating like the 3 plants in Delhi are flouting environment and pollution norms releasing cancer-causing dioxins in the air. Students warned the people that the poisonous dioxins, furans, and bottom ash emitted by the waste to energy plants in the Aravallis will destroy NCR’s green lungs and critical water recharge zone and add more toxicity to the bad air residents of Gurgaon, Faridabad, Delhi, and other NCR cities breathe.

Aanya Jain, a 17 year old shed light on the fact that development without conservation and protection of environment is a waste of time and resources and said, “Government’s mindless real waste and infrastructure development at the cost of our forests is low on my list of priorities. The waste to energy plant that is set to be established in Bandhwari is an example of how this so called development is only going to worsen air and water pollution.”

Anoushka, another member of the Students 4 Aravallis team further explained the failed waste to energy model by saying, “In a country like India, where 60% of the waste is wet food waste and segregation practices are not properly enforced or followed, a waste to energy plant is a recipe for disaster as burning mixed waste cannot produce electricity. A WTE coupled with the Bandhwari landfill would cripple the Aravallis beyond repair.”

Arshia Sikka another student present at the protest said, “We demand a better future from our elected leaders where we can breathe fresh air and have right to water security in this time when the climate crisis is looming on our heads. We need the Aravallis for our sustenance in the National Capital Region. And that’s why we are here protesting to demand our right to life.