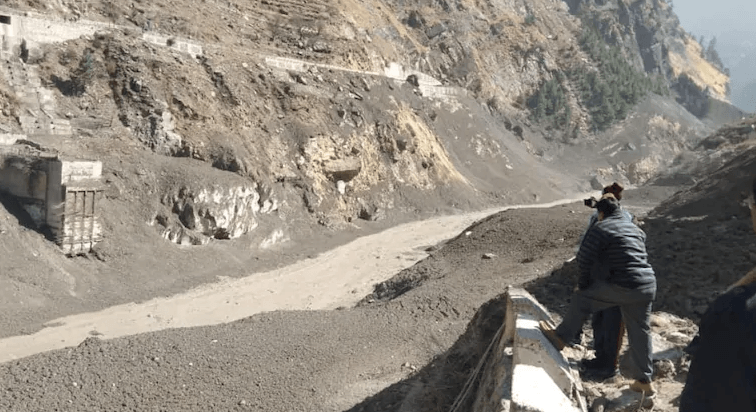 What caused the Uttarakhand Glacier Burst?
On a clear winter morning, a catastrophic deluge came crashing down in the Chamoli district of Uttarakhand. The sudden flood of dust, rock and water inundated the Rishi Ganga river, dhauli Ganga river and one of the main streams of Ganga , river Alaknanda leading to devastating destruction in the remote mountainous area. Two of […]

On a clear winter morning, a catastrophic deluge came crashing down in the Chamoli district of Uttarakhand. The sudden flood of dust, rock and water inundated the Rishi Ganga river, dhauli Ganga river and one of the main streams of Ganga , river Alaknanda leading to devastating destruction in the remote mountainous area.

Two of the main power projects in the region, the Rishi Ganga power project of 11 MW  and the barrage of the Tapovan Vishnugad hydroelectric project were damaged flooding the intake tunnels. The Indo-Tibetan Border Police (ITBP),(National Disaster Response Force) NDRF and other forces started to search and rescue operations in the region immediately.

Close to 34 bodies have been recovered in the region, with over 190 people still missing. The rescue operation is underway in the 2.5 km Tapovan NTPC tunnel where 35 people are feared trapped. Excavators are deployed round the clock to remove the slush.

On 10th February, the strategy of rescue was changed after NTPC shared the last known worksite of the laborers, a silt filtration tunnel 12 meters below. Drilling is to commence in the SFT and lights with cameras to be lowered into the area. Rescue agencies also will be now using remote sensing technologies such as a helicopter carrying a laser with electromagnetic pulse imager and drones. The national crisis management committee (NCMC) said that no imminent danger of floods is expected in the lower reaches of the areas. Food was airdropped to about 13 villages where the roads have been cut off, with roughly 2,500 people trapped.

Soon after the flood many theories have been floated by various sources. In the early wake of the disaster, the cause of the flood was ascertained to be Nanda Devi glacier breach. Nanda Devi National park is a UNESCO World Heritage site. The jökulhlaup or glacial lake outburst flood (GLOF)
was said to been caused due to climate change.

The GLOF theory is supported by the Divecha Centre for Climate Change at Indian Institute of Science, Bengaluru. The centre used a tool to map the depression in the bedrock below the north Nanda Devi glacier which may have caused the flooding. Jimmy Kansal, deputy director, The Snow and Avalanche Study Establishment of the Defence Research and Development Organisation, further reiterated the theory by adding that " There was no landslide or avalanche. There could be a glacial lake which led to the breach, but we are still investigating that.”

Dan Shugar from the University of Calgary suggested that it was an ice avalanche that descended upon the valley because of a landslide.
Meanwhile According to Pradeep Srivastava, a scientist at Wadia Institute of Himalayan Geology Dehradun the initial data shows that the flood happened due to sliding of the rock mass exposed on the top of the glacier and an avalanche.

“Due to freezing and thawing, a rock mass broke away and slid down."
"This created a melting layer near debris. An avalanche was evident from the huge clouds of dust that came down with the flowing muck and debris,”
The depredation of the fragile ecology due to anthropogenic activities seems to be one of the main causes of the flash flood. Scientists have been sounding alarm bells much before the deadly surge.

The Garhwal region falls under high seismic hazard zone 4 and  5. With Chamoli district falling under the very severe intensity zone 5. According to research by ISRP due to global warming in recent years the glaciers have been depleting at an accelerated speed increasing the risk of landslides and flash floods. Scientists have been warning about the haphazard increased development of the sensitive region.

According to the Chopra panel report of 2014, Chairman of the committee Dr. Ravi Chopra had written that “Seventy-six HEPs of more than 3,100 MW capacity in the State is in the paraglacial region. In our report, we have proposed that no HEPs should be built in the paraglacial region(7,000 feet above sea level) as it has loose glacial debris which when carried downstream can be disastrous.”

However,  the director of People’s Science Institute in Uttarakhand said that "Both of the hydroelectric projects hit by Sunday’s flood one obliterated and the other badly damaged were built in that zone"

D.P. Dobhal, a former scientist at the government-run Wadia Institute of Himalayan Geology, echoed most scientists and experts when he said, “When we develop such projects in the Himalayas such as hydro projects or roads and rail, in detailed project reports the glacier study data is never taken into consideration or included.”

Meanwhile, The residents of the Raini village near the Rishi ganga power project were one of the hardest hit. The village is famous for starting the "Chipko movement" in 1973 by Gaura Devi which stopped the cutting of trees by the local residents of the village. In 2019 a public interest litigation was filled by Kundan Singh on behalf of the villagers in the high court requesting the court to overlook the situation in Raini village concerning the construction of the hydel project and the rampant stone crushing and blasting that lead to animals from Nanda Devi reserve to flee and enter the villages.

The court had asked the District magistrate and member secretary of state pollution board to form a team for the inspection of the hydel project to check the impact on the environment. The court had also put a stay on the blasting in the project area till further orders. However, Abhijay Negi, the counsel of Raini village said that despite bringing into notice that things were not good in the area and the court subsequently issued two orders including a stay, no action was taken. He said that "I got a call from my petitioner in Raini village telling me that what we had been worried about has finally come true and Nature has replied to the apathy of the government,”

Having two cataclysmic floods in one decade is a cause for concern. The disastrous devastation of the Himalayas will soon get bigger and deadlier until we don't stop the mindless development of the fragile region and incorporate scientists, experts and environmentalists to form a holistic model of sustainable advancement in the region.