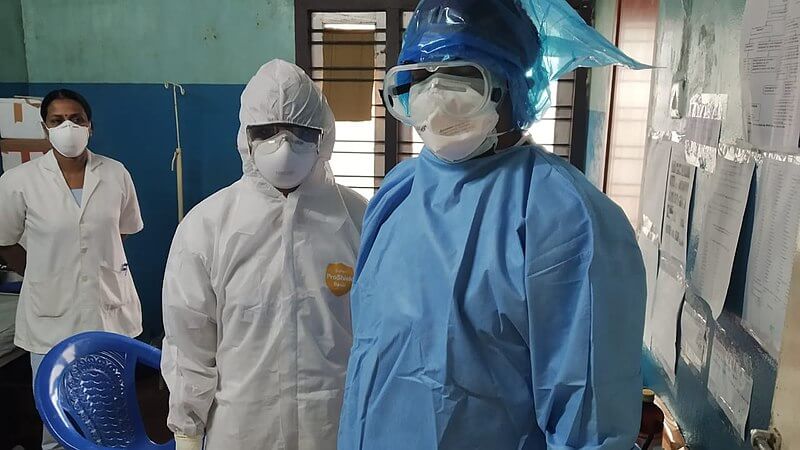 Surge in coronavirus cases, a reminder of the adverse impacts of air pollution on our health

Barely weeks after a fire at Delhi’s Ghazipur landfill took firemen nearly 36 hours to control, a fire broke out at the city’s Bhalswa landfill a few days back. Amid concerns of rising Coronavirus cases in the backdrop of Delhi’s poor air quality, air quality levels in parts of the city dipped to ‘severe’ levels […]

Barely weeks after a fire at Delhi’s Ghazipur landfill took firemen nearly 36 hours to control, a fire broke out at the city’s Bhalswa landfill a few days back. Amid concerns of rising Coronavirus cases in the backdrop of Delhi’s poor air quality, air quality levels in parts of the city dipped to ‘severe’ levels on the Air Quality Index.

The fire marks the second landfill fire in less than a week, part of an emerging trend of annually recurring landfill fires over the past few years. In November 2017 and October 2018 and 2019, major fires had broken out at the Bhalswa landfill. There’s been a similar situation at the overexploited Ghazipur landfill – with a history of major fires in October 2017, March 2018 and April 2019.

Anumita Roy Chowdhury, Executive Director at the Centre for Science and
Environment explained that huge amounts of mixed garbage make landfill fires more dangerous and polluting than ordinary fires. Experts believe that Delhi’s landfills are prone to fires since they continue to be used despite having surpassed their maximum capacity, thus providing the suitable temperature and pressure conditions for the combustion of methane and oxygen.

The combustion of toxic waste results in persistent fires which throw off plumes of smoke that can worsen health conditions. Although Coronavirus cases have been decreasing across the country, Delhi has been among the
outliers. On November 11th, Delhi recorded 8,593 cases, marking its highest single-day spike in infections.

Experts say air pollution is one of the primary reasons for what doctors are calling the ‘third peak’ of cases in the city. Dr. Rajesh Bhardwaj, Head of MedFirst ENT (Ears-Nose-Throat) Centre, said, “air pollution helps to disperse the virus farther since it can piggyback on PM 2.5 and PM 10 particles.”

According to air quality standards, PM 2.5 concentration should be less than 60 micrograms per cubic metre of air. Following the fire at Ghazipur, PM 2.5 levels shot up by roughly 200μg/m3, with Anand Vihar and Patparganj recording levels of 462 and 421 respectively. With stubble burning, road dust, and vehicular emissions contributing to the region’s poor air quality, the increasing frequency of landfill fires increasing is yet another cause for concern.

Initial findings by the Indian Medical Association revealed that air pollution was responsible for 13% of the increase in Coronavirus cases. International research appears to support these claims. A study by Harvard University revealed that prolonged exposure to air pollution was responsible
for an increase in the death rate of Coronavirus patients by at least 8%.

Since 28th October, Delhi has recorded 2,300 deaths – accounting for a staggering 26% of its Covid-deaths. In the context of a study by Cambridge University that found a link between long-term exposure to air pollution and the degree of severity of the virus, Dr. Vivek Nangia, Head of Pulmonology at Max Healthcare, said, “There is no doubt that these studies hold true. If anything, the surge in Coronavirus cases presently is proof that the implications of these studies are likely much worse for Delhi, with air pollution being as bad as it is here.”

While it is true that air pollution in Delhi has increased susceptibility, vulnerability and mortality with regard to the Coronavirus, air pollution hasn’t just become a health concern during the pandemic. A 2018 study revealed that India’s capital city loses as many as 80 lives to air pollution every day. Air pollution reduces general immunity and poses health risks such as strokes, heart attacks, diabetes, lung cancer and chronic lung diseases.

According to doctors, particulate pollutants such as PM 2.5 – which are 30 times finer than human hair – can enter the bloodstream through the lungs and hamper organ functionality. Doctors Nangia and Bhardwaj explained that air pollution can have several short-term and long-term effects. Residents near the Ghazipur and Bhalswa landfills complained of short-term symptoms such as eye irritation, throat, nose and skin itchiness following the fires.

Some of them told media that they experienced breathing difficulties, nausea, and dizziness. Long-term effects can include liver and kidney damage, higher risk of urinary and bladder cancer, lung damage, and brain and nerve damage.

The State of Global Air Report 2020 revealed that 1.67 million people died due to air pollution-related complications in 2019 in India alone. 1.16 lakh from among them were infants. With air pollution levels as high as Delhi’s, infants are particularly vulnerable since the polluted air can overwhelm their developing respiratory systems.

Written by
Abhiir Bhalla
Abhiir is a youth environmentalist and sustainability consultant. Presently a Sophomore at Ashoka University, he is pursuing a degree in Political Science and International Relations. Working in the field of environmental conservation and protection since over 7 years, some of Abhiir's key projects have included working at the International and National level with organisations such as the UN Environment Programme, Delhi Metro Railway Corporation, WWF and CSE. Currently the Director - Operations and Community Engagement at Care for Air India, he has a keen interest and experience in environmental issues pertaining to air pollution and waste segregation.
Recommended Articles