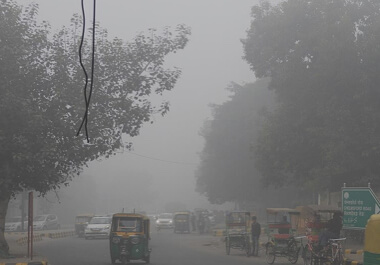 A fresh inquest into the death of an asthmatic nine-year-old girl has started after a medical report suggested a direct link between her illness and poor air quality near her home, not far from a busy road. Ella Adoo-Kissi-Debrah could now become the first person in the UK – and possibly in the world – […]

A fresh inquest into the death of an asthmatic nine-year-old girl has started after a medical report suggested a direct link between her illness and poor air quality near her home, not far from a busy road.

Ella Adoo-Kissi-Debrah could now become the first person in the UK – and possibly in the world – to have “air pollution” listed as a cause of death.

Ella Kissi-Debrah lived 25m (82ft) from the busy South Circular road in Lewisham, south London. The nine-year-old had suffered numerous seizures – making 27 visits to the hospital with breathing problems in the three years before her death.

A first Inquest, in 2014, ruled that Ella died of acute respiratory failure caused by severe asthma. This was quashed in 2019 and a new Inquest ordered after new evidence into the risks of air pollution was revealed in a 2018 report by leading expert Professor Sir Stephen Holgate.

Giving evidence, David Edwards, the head of environmental health at Lewisham, accepted that levels of nitrogen dioxide (NO2) near the child’s home consistently exceeded the annual legal limit of 40µg/m3 between 2006 and 2010.

Asked by Barlow whether exposure to high levels of nitrogen oxides raised health concerns, he replied: “Yes, from my experience, yes it would.” The council official agreed the risk was particularly real to those suffering conditions such as asthma and was also increased for those who lived near high levels of traffic pollution.

Ella’s mother Rosamund Adoo-Kissi-Debrah said, “It’s coming up to eight years since Ella passed and it’s been a long hard fight to get this Inquest, with challenges along the way. What I want is justice for Ella and for her to have on her death certificate the true cause of why she died.”

She added, “So much has changed since Ella left us and we still miss her every day. It’s strange to think she would be sixteen now – it’s a completely different world without her and I do wonder, if she was here, what she’d be up to now, what her interests would be, what she’d make of the world.”

Dr. Arvind KumarFounder Trustee – Lung Care Foundation (India) said, “The inquest into Ella’s death could save the lives of millions of children around the world, including in India. By confirming that the air pollution in Ella’s London neighborhood caused the asthma attacks that killed her, this inquest would make clear that a government’s obligation to protect our right to life includes ensuring our right to breathe clean air. Toxic air causes 7 million premature deaths every year worldwide and kills 500,000 children under five years old. Clean air is a human right, and it’s time our governments do something about it.”

More than 30,000 deaths in the United States in a single year may have been caused by air pollution, according to a study published in the journal PLOS Medicine that estimated the deaths for 2015, the most recent year for which data was available. Researchers analyzed air quality trends from that year back to 1999 at over 750 monitoring stations across the continental United States. They looked specifically at particulate matter — small, inhalable particles in the air that can enter the bloodstream. However, no direct link to an individual death has ever been made.