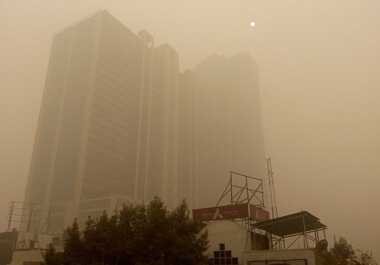 ‘It took an entire pandemic to make us realize the importance of clean air’
We never understood what a blessing it was to be able to breathe freely until we were forced to stick a piece of thick cloth smothered to our faces. It took an entire pandemic for us to realize the importance of things which we took for granted for so long, be it as simple as […]

We never understood what a blessing it was to be able to breathe freely until we were forced to stick a piece of thick cloth smothered to our faces. It took an entire pandemic for us to realize the importance of things which we took for granted for so long, be it as simple as that and it took one species to alter the planet's basic fundamental structure which can be reflected in our very atmosphere.

Our thirst for exponential growth may have helped us cure diseases develop ideas for life but has blinded us to an extent that we fail to realize we are literally choking on our dreams. The industrial revolution may have paved the way for the future but how would we travel when we can't even see through the smog?

Human activities have changed the concentration of carbon dioxide in the atmosphere, not to forget to an extent, and raised them to levels which haven't been seen in a million years. The most remote places of our planet have found traces of human-created substances, not only in the air but in actual living creatures. We have been reading, writing, hearing about air pollution for as long as we can remember but do we know the
the gravity of the situation we are in?

With climate change as a time bomb, our actions are just adding more fuel to the fire ( which our planet is already) No pun intended. With over 600,00 child deaths each year due to air pollution, 3.4 million premature death from heart and lung diseases, we have acquired wealth at the cost of our health but the question arises, is it truly worth it?

The imbalance of greenhouse gases for eg. carbon dioxide, methane, nitrous oxide, and fluorinated gases are caused due to burning of fossil fuels trap heat from the sun in the earth's atmosphere and lead to a rise in the global temperature pushes us into a vicious cycle where air pollution contributes to climate change and climate change creates high temperatures which in turn intensifies certain types of air pollution eg. smog which is caused due to high heat and increased levels of UV radiation.

Emissions that people are emitting are coming from common sources i.e. transportation. The formation of particulate matter in the ozone in the atmosphere influences air quality. Some may argue that air pollution may occur due to natural sources like volcanic eruptions and wildfires etc.
but this doesn't cover up the fact that we are responsible.

A study conducted by the International Council on Clean Transportation (ICCT), Milken Institute School of Public Health from George Washington University, and the University of Colorado Boulder Exhaust from vehicles was responsible for over 3.8 lakh (3,85,000) deaths worldwide in 2015 out which 74,000 deaths occurred in India.

Out of the total number of transportation-attributed deaths in India, 66 percent were caused by diesel vehicles. The health risks from transportation emissions are as deadly as they can get from cancer, reproductive complications to birth defects again pointing towards what kind of world are we leaving behind for the future generations?

We can clearly see and understand now that old ways don't need new results and if we are intelligent enough to create such problems, we
need to own the mess up and not only find solutions but actually implement them. There is a need for a desperate need to transition to clean energy in the power sector and massive mobility transition because it's evident enough that vehicles are 40% of the problem. We need to scale up public
transport strategies and be mindful of what sort of projects are we pushing forward.

The bus system is supposed to be the spine of the public transport system, but it has been ignored like the middle child of a family. Today, if we need 15,000 buses in the city, we have around 5,000. We need to stop encouraging private vehicles and stop giving hidden subsidies to vehicles with free parking, minimal charges of using the roads, and not recovering the cost of congestion from them.

At the end of the day, it is the actions we take today will determine the future with lung diseases and oxygen cylinders or without. For once, let's try to act like the intelligent creatures we humans claim to be.