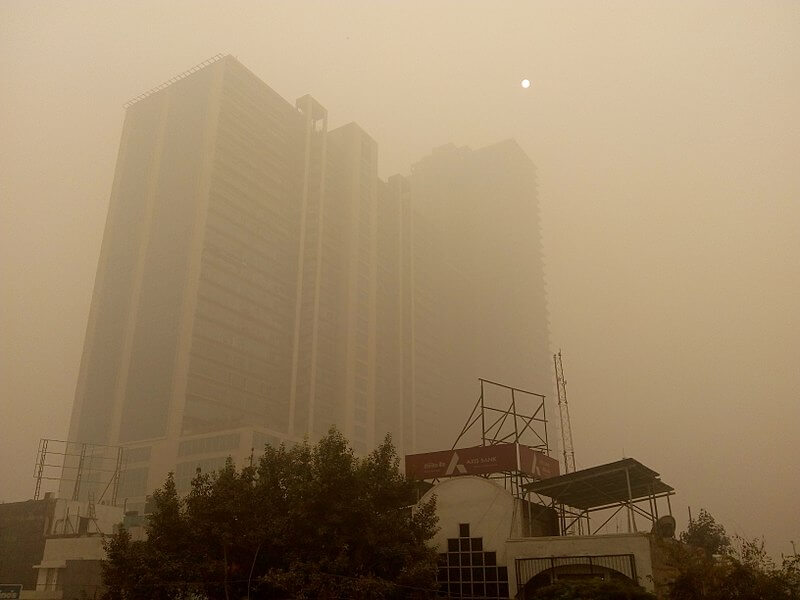 ‘Delhi is choking every year’: What can be done?
Air pollution has always been a big problem for Delhiites. If you closely follow Indian news channels, you might have recently come across Delhi’s rising air pollution. Delhi is one of the most heavily polluted cities in India. In November 2019, the Government of Delhi declared public health emergency as air in the environment was […]

Air pollution has always been a big problem for Delhiites. If you closely follow Indian news channels, you might have recently come across Delhi's rising air pollution. Delhi is one of the most heavily polluted cities in India.

In November 2019, the Government of Delhi declared public health emergency as air in the environment was highly toxic. The government closed the school, Cancelled flights, and distributed 5million masks to school children keeping in mind the health consequences. For Delhiites, breathing the air was like smoking 50 cigarettes a day.

The Lancet Commission on pollution and health found that in 2015, 9 million premature deaths stemmed from air pollution around the world. India suffered the worst toll of any country, with more than 2.5
million of these deaths. Delhi's air is classed as filthy, which is not all suitable to breathe in.

According to the researchers, Your total life span will cut by 2years if you continue breathing the air. The World Health Organization reported that 11 of the 12 cities in the world with the most pollution from PM2.5 — particles smaller than 2.5 microns in diameter that can cause dangerous heart troubles and breathing problems — were in India. When it comes to
pollution, India has always been classed as a "Gas Chamber" because out of the 30 most polluted cities in the world, India is the home of 21 polluted cities(Delhi, Gwalior, Allahabad, Patna, Raipur).

A study claims that in the year 2017, India's toxic air has claimed the lives of
1.74 million people. Now, let's try to understand what is causing the extreme air pollution level in Delhi and India.

Stubble Burning: One main reason people claim for air pollution in Delhi is Crop burning. Delhi shares its border with Haryana, Punjab, Uttar Pradesh. These states are agricultural states where farming is done on a massive scale. It is a common practice by the farmer to burn rice stubbles. The wind carries all the pollutants and dust particles, which have got locked in the air.

Vehicular pollution: Traffic jams & honking which is very common in almost every state of India. The Central Pollution Control Board (CPCB) and the National Environmental Engineering Research Institute (NEERI) have declared vehicular emission as a significant contributor to Delhi's increasing air pollution. Traffic jams add more to the carbon emission, which comes out vehicles stuck in traffic jams. People misuse the horns in India, which contributes to a significant rise in noise pollution.

Urbanization: Economies around the world are facing similar problems as societies urbanize and shift from agrarian to industrial. According to the study, only 10.6 percent of the total land is covered by the tree, and 30 percent of India's total land covers with Primary forest which means almost 60 percent of the land has no trees. However, the government and local
NGOs in India have been doing tree plantation drive, but its output will be in the long run.

Re-Cycling Center: There are many cities in India where there is no recycling center. Household and Industrial waste are being dumped outskirts of the city. Garbage dumps are also increasing air pollution and building-up smog in the air.

But, the government failed to control the firecracker bursting on the eve of Diwali as residents manage to buy firecrackers. How did people buy the firecrackers even after the ban? Why didn't people act responsibly to air pollution, which has claimed the lives of millions of people?

Delhi officials also implemented an odd-even traffic rationing scheme that takes about half of the cars off the road on a given day based on their license plate numbers. However, the scheme barely made a dent in the amount of pollution. India’s Supreme court issued a notice against
the stubble burning but still the fire continued.

At the recent United Nations Climate Action Summit, Indian Prime Minister Narendra Modi pledged that his country would more than double its renewable energy production, going from 175 gigawatts to 450 gigawatts by 2022. However, he did not commit to any reductions in fossil fuel use or greenhouse gas emissions.

Overall, government officials respond to air pollution, but their actions are not as aggressive as it should be. Despite all the known harms of air pollution, economic development's pressure remains immense, and many public officials are willing to accept the trade-offs.